6.1 The DYW Regional Groups exist to bridge the gap between employers and education. Successful engagement of employers is therefore fundamental to the success of the Groups in achieving their objectives. This chapter reports on the findings from the evaluation in relation to engaging employers. It explores employers' motivations for engagement, the nature of the activities they have engaged with, barriers faced and overall levels of satisfaction with their experiences to date.

6.2 More than 1,300 employers were reported to have engaged with the four Regional Groups included within the evaluation. All four Groups reported capitalising on and further developing their existing connections with employers. In particular, the Groups reported the advantages of having access to the employer databases held by the Chambers of Commerce, enabling them to further build on existing networks.

A desire to help young people was a found to be a stronger motivator for employers to engage in DYW activities than the potential business benefits or opportunity to meet corporate social responsibility objectives.

6.3 The majority (87%) of employers that responded to the survey reported that they were motivated to engage in DYW activities to improve the work-readiness of young people (Figure 6‑1). Other common motivators (cited by the majority of survey respondents) were to put something back into the local community, to raise awareness of career opportunities in their industry and to develop the future supply of skills for the sector.

6.4 Employers were generally less motivated by the potential business benefits to them from engagement and less than half cited Corporate Social Responsibility objectives as a key motivator. This lack of focus on the business benefits from engagement could impact on employers' continued commitment to engaging in DYW activities, as well as their willingness to pay to engage in these types of activities in future.

Figure 6‑1: How important are the following factors as motivators for your organisation to engage in DYW activities? 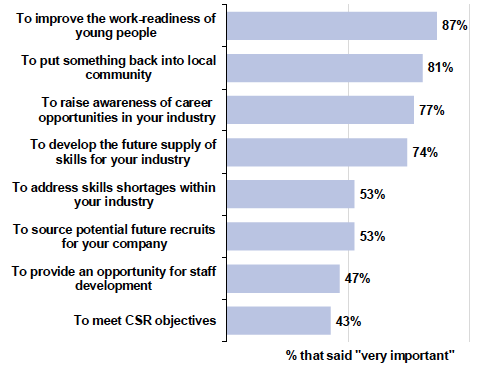 High-volume, stand-alone activities were most frequently undertaken, with activities requiring a higher level of embedding into the school curriculum being reported less frequently.

6.5 Figure 6‑2 shows the activities that employers reported having engaged with through the DYW Regional Groups. This shows that:

Figure 6‑2: Which of the following activities have you / your organisation participated in or delivered as a direct result of engagement with Regional Group? (Please select all that apply) 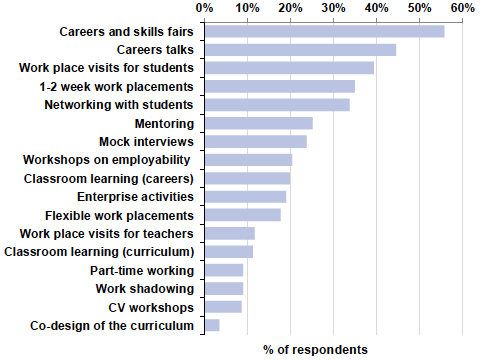 There were regional variations in the types of activities undertaken and in the depth of employer engagement.

6.6 The types of activities that employers engaged in varied by region. The nature of engagement depended on the types of activities the Groups themselves had decided to focus on, what had been requested by schools, and the presence of logistical barriers to some activities, for example difficulty in organising flexible work placements in more rural areas. The Board members consulted appeared comfortable with the choices they had made, essentially viewing them as a suitable response to the needs in their areas and a desire to add value rather than duplicate existing activity.

6.7 The depth of engagement between employers and schools was also found to vary by region. Whilst each of the Regional Groups were comfortable the choices they had made in terms of what they had decided to focus on, they did express contrasting views about some key issues. For example, one group was very positive about developing strategic partnerships – that is, in-depth and long term relationships between employers and schools – whilst another thought that this was not a good approach as having a large employer delivering in-depth support to just one school could be considered to be inequitable.

The Wood Group have partnered with Northfield Academy, providing career guidance and experience in a number of ways across all secondary school stages, including:

6.8 120 school pupils visited the Group's Sir Ian Wood House office over four separate sessions to understand more about career options for the future, the different types of jobs at Wood and how people work in an office. The students learned about the skills required for different jobs and discussed how that relates to what they are learning at school. They also completed a STEM activity which involved designing and building a car using balloons.

Most employers reported having engaged in multiple activities through the DYW Regional Group.

6.9 Employers were asked to indicate the types activities they had engaged with through the Regional Groups. Out of 231 respondents, 19 (8% of the total) reported that they had not engaged in any activities. Of those who had undertaken activity (n=212), around half had been involved in between one and three different types of activity. Figure 6-3 shows the distribution of the numbers of activities engaged with across the sample.

6.10 Employers were asked how many hours (approximately) they had spent on DYW activities over the past 12 months and around half of respondents (93) provided this information. The responses ranged from 1 to over 1,000 hours. The median time committed by employers was 3 days (21 hours), indicating potentially high leverage from business engagement.

Figure 6‑3: Number of different types of activities undertaken by employers 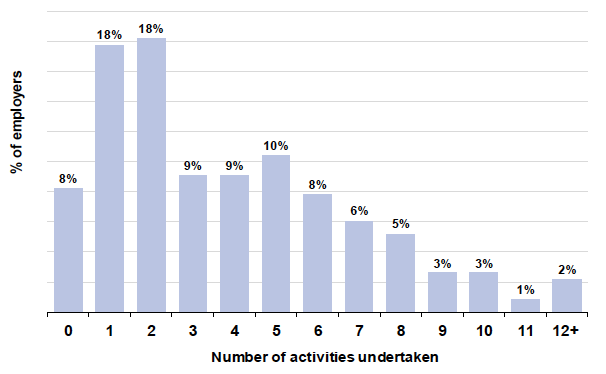 The most commonly cited barriers to engagement facing employers were issues aligning with school / college timetables and staff time off-the-job to participate.

6.12 Of the 143 respondents who had experienced barriers / challenges with engagement, a quarter cited issues aligning their schedules with school / college timetables, and just under a quarter found it difficult to release staff from their job to participate in activities (Figure 6‑4). Other barriers faced include regulations around engaging young people (such as health and safety) and challenges engaging staff in schools / colleges, but these were less frequently cited.

6.13 Other (non-categorised) barriers / challenges referenced by employers include:

Figure 6‑4: Has you / your organisation experienced any of the following barriers / challenges to engagement in DYW activities? 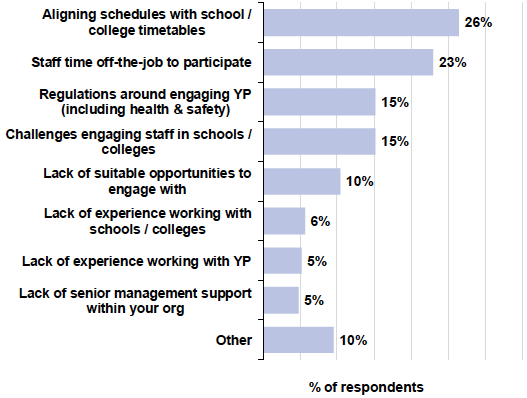 6.14 The findings from the survey were echoed in consultations with employers and in discussion with the Regional Groups:

Employers were generally positive about their experiences of engaging in DYW activity and would recommend this to others.

6.15 The survey results indicate that employers are generally positive about the quality of their engagement with the DYW Regional Groups. Moreover, most reported that their expectations from engagement had been met and that they would recommend engagement to others (Figure 6‑5, Figure 6-6, and Figure 6-7). These are encouraging findings and credit to the work being done and facilitated by the Regional Groups. The fact that over 40% said they would recommend engagement with the Groups to others, but have not yet done so, suggests a ready mechanism to promote DYW more widely.

Figure 6‑5: Overall, how would you rate the quality of the activities that you / your organisation has engaged with through the Regional Group?

Figure 6‑6: To what extent are your organisation's expectations from engagement in DYW activities being met?

Figure 6‑7: Would you recommend engagement with the Regional Group to other employers in your area?

The Regional Groups have helped to remove barriers to engagement and have been a valuable source of advice and support to employers developing their relationships with schools.

6.16 Consultees confirmed the overall positive response from the survey. Across all regions, consultees praised the work of the Regional Groups as having "simplified the landscape", as well as "opening doors, scene-setting, engaging with key parties and [giving] us the skills to better promote our offer…". Employers commented on the range of connections and contacts that the Groups have access to, and their ability to act as a conduit to schools.

6.17 Employers specifically highlighted how the Regional Groups had introduced them to Marketplace, enabling them to better understand the needs of schools. One consultee stated that, through engagement with the Group, they had a much better understanding of knowledge gaps and misconceptions in the careers and enterprise landscape (particularly surrounding apprenticeships). This has enabled them to better target their school outreach activity.

6.18 Although it is evident that barriers to engagement do exist, employers recognised the work of the Groups in either removing them, or enabling companies to overcome them: "they have tacked a few root causes of delays in provision, like health and safety accreditation, and handle the slowness of schools well."

6.19 Across all regions, consultees commented favourably on their interactions with representatives from the Regional Groups. Employers from all regions were in regular contact with staff from the Groups, and it was commented on explicitly in at least two regions that the Groups had a strong brand and presence on social media. Their flexibility and responsiveness to requests, queries and suggestions was frequently highlighted.

"The team are incredibly flexible and are dedicated to finding meaningful solutions for employers and positive destinations for young people."

6.20 One consultee viewed their relationship with the Regional Group as a partnership. They would make suggestions to the Group, for example regarding the promotion of Apprenticeship Week, and the Group were there for "advice and support". The high level of personal support offered by Regional Group staff was highlighted. Consultees across all regions recognised the importance of the relationships developed with individual staff on the Groups and consistently praised the level of commitment and support given in brokering relationships between employers and schools.

"[The DYW Regional Group are] an essential part of the landscape of provision … things would be chaotic and ineffective without them!"

Most employers did not identify any areas for improvement, however improvement in sharing best practice and in engaging hard to reach students could be considered.

6.21 Although most employers did not identify any areas for improvement for the Regional Groups, five consultees raised some specific concerns and suggestions for improvements: