2.1 This chapter looks at the policy context and rationale for the establishment of the DYW Regional Groups. It begins with an overview of trends in the labour market immediately following the recession, particularly in relation to the rise in youth unemployment. This is followed by details of the Government's response to this, which led to the creation of the Regional Groups.

Young people were disproportionately impacted by the economic recession that followed the global financial crash in 2008.

2.2 The economic recession that followed the global financial crash in 2008 is widely regarded to have had less of an impact on the UK labour market than might have been expected given the scale of the downturn, and in comparison to previous recessions. Specifically, unemployment did not go up at a rate that might have been expected as employers held on to experienced workers or introduced more flexible working patterns.

2.3 However, there is strong evidence to suggest that the employment prospects of young people were disproportionately impacted by the recession. The unemployment rate of 16-24 year olds rose by 10 percentage points between 2008 and 2012, more than double the equivalent four percentage point increase across the working age population as a whole (Figure 2‑1). This position has since has improved and the latest available data suggests that youth unemployment has now returned to below pre-recession levels.

2.4 However, it is worth nothing that, even prior to the recession, youth unemployment was more than double the equivalent rate of the working age population as a whole. This points to an underlying structural (rather than cyclical) issue in the labour market that is preventing many young people from moving into work. 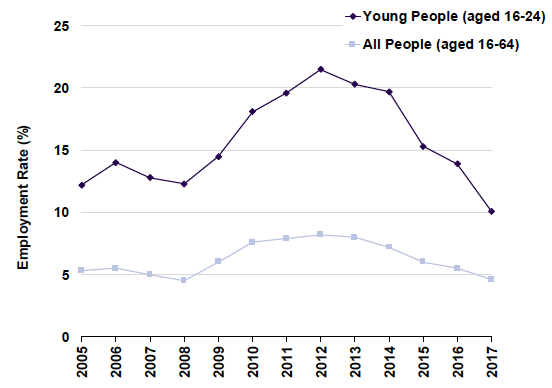 Young people cite lack of work experience as a key barrier to employment, whilst at the same time relatively few employers offer work experience placements or recruit directly from education.

2.5 SQW carried out a review of young people's experiences of education and training from 16-24 years old on behalf of the Scottish Government in 2017[2]. The study identified lack of work experience as one of the main barriers to employment facing young people in this age group. Fewer young people now combine work and study and many therefore leave education without ever having had a paid job. This puts them at a disadvantage, particularly when they find themselves competing against older, more experienced workers.

2.6 At the same time, there is evidence to suggest that relatively few employers offer work experience placements or employment opportunities to young people. The 2016 Employer Perspectives Survey found that less than a third (32%) of Scottish employers recruited young people directly from education or training and just 43% offered work experience placements and / or engaged with educational institutions to offer work inspiration activities to students.

2.7 It was in the context of the rapid rise in youth unemployment following the recession, and evidence that relatively few employers were offering work experience or employment opportunities to young people, that the Scottish Government set up the Commission for Developing Scotland's Young Workforce in January 2013. The Commission was led by Sir Ian Wood and tasked with developing a series of recommendations to improve young people's transitions from education to employment.

2.8 The final report of the Commission was published in June 2014 and called for more effective joint working between schools, colleges, training providers and employers with the aim of better equipping young people for the world of work[3]. It identified 39 recommendations for Government and wider partners and stakeholders to take forward. Of particular relevance for the current study was:

Recommendation 14: The Scottish Government should support the creation of regional industry-led Invest in Youth groups across Scotland to provide leadership and a single point of contact and support to facilitate engagement between employers and education.

2.9 The Scottish Government welcomed the recommendations from the Commission and published Developing the Young Workforce – Scotland's Youth Employment Strategy, which detailed a seven-year plan to implement these. This included a commitment to establishing regional industry-led groups as per Recommendation 14, which subsequently became the DYW Regional Groups.

2.10 Underpinning the strategy was a target to reduce 2014 levels of youth unemployment by 40 per cent by 2021. This target was achieved four years ahead of schedule in 2017. However, as shown in Figure 2-1, the youth unemployment rate remains twice that of the working age population as a whole and so continues to be a policy priority.

2.11 The make-up of youth unemployment has also changed since the launch of the strategy, with many more young people choosing to stay in for school for longer and the vast majority (>90%) moving into a positive destination (further / higher education, training or employment) on leaving. However, the review of young people's learner journeys found that post-school destinations are often not sustained and that many young people face significant challenges in successfully transitioning into work following completion of these. Key issues and challenges therefore remain, particularly for those at the higher end of the 16-24 age band.

The DYW Regional Groups operate in a complex policy and delivery landscape amongst a range of other initiatives aimed at improving the employment outcomes of young people.

2.12 The DYW Regional Groups were established in response to one of 39 recommendations made by the Commission for Developing Scotland's Young Workforce. They form just one part of the Government's wider DYW policy agenda, with a broad range of other initiatives and programmes introduced in response to the other 38 recommendations. These are detailed in Scotland's Youth Employment Strategy and include activities aimed at:

2.13 A key area of activity for the DYW Regional Groups, particularly in the early stages, was on mapping the range of existing activity already underway within their respective areas and identifying where they could best add value to the existing landscape. To varying degrees, the Groups have also taken on a co-ordination role to help avoid overlap and duplication of activity. This has involved close partnership working with relevant local, regional and national organisations operating in this space.