3.1 This chapter reports on the evaluation methodology. It begins with an overview of the three main stages involved, followed by details of the approach taken to each. It concludes with an assessment of the relative strengths and weaknesses of the approach, as well as the lessons that can be learned to inform future evaluation activity – both for the DYW Regional Groups and the wider DYW policy agenda.

3.2 The evaluation focussed on four of the 21 DYW Regional Groups – Ayrshire; Edinburgh, Midlothian and East Lothian; Inverness and Central Highland; and North East. These Groups were pre-selected by the Scottish Government to ensure a mix of newer and more mature groups, urban and rural areas and different approaches taken to delivering DYW activity. All four Groups are hosted by local Chambers of Commerce.

3.3 The evaluation was carried out between December 2017 and April 2018. There were three main stages involved, as set out in Figure 3‑1. The sections that follow report on the specifics of the activities associated with each stage. 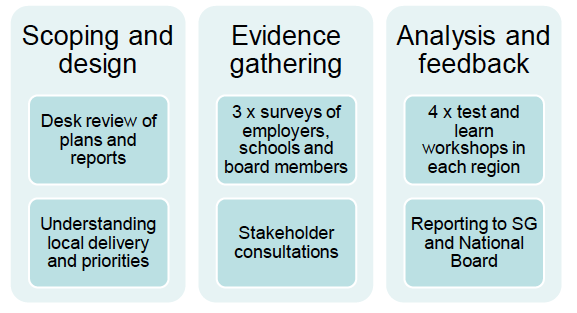 3.4 The first stage of the evaluation involved developing an understanding of the key priorities and activities of the four Regional Groups. This was achieved through:

3.5 The findings from the scoping stage were reported to the Scottish Government in January 2018. This was followed by a session with the DYW Measuring Impact Working Group in early February to discuss the key messages and agree on the approach to the evidence gathering stage, including the design of the research tools.

3.6 The evidence gathering stage was designed to capture both breadth and depth of feedback from stakeholders involved with the DYW Regional Groups. This was done through:

3.7 It was agreed at the scoping stage that the online surveys would be distributed by the Regional Groups rather than the SQW evaluation team. The rationale was two-fold: to mitigate any data protection issues associated with sharing stakeholder contact details; and that people would be more likely to respond to a request from a known contact.

3.8 SQW prepared the online surveys and shared these with the Executive Leads for each the four Regional Groups on 16 February 2018, along with covering emails and suggested text and instructions for issuing reminders. The surveys remained open for just over two weeks, closing on 6 March 2018.

3.9 The Executive Leads were asked to issue the surveys to all schools, colleges and employers that had engaged with the Regional Group, as well as all Regional Group Board Members. Table 3‑1 shows the total number of responses received and Table 3‑2 shows the associated response rates[7].

3.10 The surveys were followed up with 25 in-depth consultations with a selection of employers, schools and wider partners and stakeholders that had engaged in DYW activities organised through the Regional Groups[8]. The consultees were nominated by the Executive Leads for each of the groups.

3.11 The survey response rates for Regional Group Board Members and schools / colleges were generally high across all areas and so it is safe to assume that the results are robust and representative. However, the response rates were much lower for employers across all areas, and were particularly low in the North East and in Edinburgh, Midlothian & East Lothian. Possible explanations for this were that:

3.12 The findings from the surveys were analysed and reported back to each of the four groups via a series of two-hour workshops with Regional Group Board Members[9]. The format of the workshops involved SQW reporting back on the headline findings for the region, relative to the average for the four regions combined, and facilitating a discussion around these. The Regional Groups each received a slide pack with the survey findings for their region following the workshop.

3.13 A key strength of the evaluation is that it gathered both a breadth of perspectives, through the online surveys, as well as in-depth feedback through the one-to-one consultations. In addition, the regional workshops provided the opportunity for Board Members to review and reflect on what was going well and where challenges remained. These discussions helped to strengthen the analysis and interpretation of the evaluation findings.

3.14 However, there were some limitations. These mainly relate to a lack of control on the part of the evaluation team to recruit participants – both for the surveys and the consultations. A further (related) limitation is that feedback was only invited from those employers, schools, colleges and partners who had actively engaged with the Regional Groups. This limited the scope for exploring the barriers faced by those who had not engaged. Combined, these factors point to an element of positive bias in the evaluation findings.

3.15 A further important limitation of the evaluation is that it did not incorporate feedback from young people. This was raised as a concern at the scoping phase, and in one of the regional workshops, but was beyond the scope of the current assignment. We understand that discussions are underway around potential options for addressing this.

3.16 Another issue raised at various points throughout the study was a general lack of clarity on the specific role and contribution of the Regional Groups amongst the increasingly crowded landscape of initiatives aimed at improving the employment outcomes of young people, many if which relate to the wider DYW programme. The result was that some consultees were not clear on 'who had done what' and so struggled to comment on the effectiveness of the Regional Groups, or to attribute change to their activities.

3.17 The key lessons that can be learned to inform future evaluations – both of the DYW Regional Groups and the wider DYW policy agenda – relate to: