4. Profile and operation of the Regional Groups

4.1 This chapter looks at the profile and operation of the four DYW Regional Groups included within the evaluation. It begins with an overview of the structure and governance of the Groups, followed by details of how they liaise with the National Group. The operation of the Groups is then summarised, followed by an overview of their main areas of activity.

The four Regional Groups included within the evaluation are all Chamber-led and include representatives from both employers and education.

4.2 The four Regional Groups each have a strategic board, which meets quarterly and is chaired by an employer. The size and make-up of the boards vary between areas, but they each include representation from a number of local employers, as well as education representatives, such as local authorities, colleges and Skills Development Scotland. Some also include third sector delivery partners, such as the Princes Trust. They are each hosted by Chambers of Commerce, who provide secretariat support.

The consensus amongst Regional Group Board Members was that the governance arrangements for the Groups were working well.

4.5 When probed on this during the regional workshops, one Board Member said that this finding was reflective of their attitude to "always strive for better… I don't know if we'd ever reach a point where we all said 'yes, this is perfect'". Others referenced challenges in the early stages to get the Groups up and running and all of the relevant partners on board.

Figure 4‑1: Overall, how effective do you think the current governance arrangements are for the DYW Regional Group? 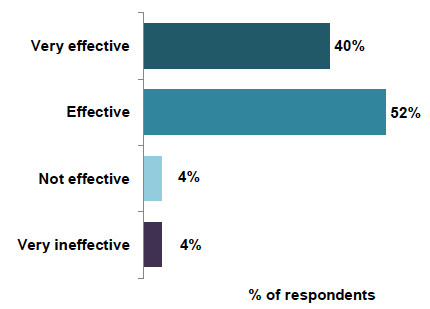 Survey respondents were positive about the effectiveness of the Regional Groups in terms of creating a single point of contact for employers to engage with education and for school / colleges to engage with employers.

4.6 Schools, colleges and employers were asked to rate the effectiveness of their DYW Regional Group across the range of factors listed in Table 4‑1. The findings suggest that the Groups are doing particularly well in terms of creating a single point of contact for employers to engage with education, and for schools / colleges to engage with employers – one of their primary objectives. This was further referenced in the regional workshops and the qualitative responses to the survey.

4.7 There was mixed feedback from survey respondents in relation to the other factors listed, although employers were generally more positive about the effectiveness of the Regional Groups than schools / colleges. This was a point of discussion at the regional workshops, with the consensus being that the Groups did have more of an employer focus in the early stages. Being Chamber-led, they were more readily able to engage with employers through existing Chamber networks, whilst the process for engaging schools and colleges took longer. However, the feedback was that the balance was beginning to shift now that the Groups were developing increasingly effective relationships with schools and colleges.

"A key success factor has been having the Chamber as lead. This has ensured that it is truly private sector led. They could hit the ground running in terms of getting employers on board." Regional Group Board Member

4.8 This analysis also points to a potential mismatch between employers and schools / colleges in terms of the extent to which they perceive the other to have changed their practices as a result of engagement with the DYW Regional Groups. Employers were more likely to report that the Group had been effective in changing their practices, and less likely to report that it had been effective in changing the practices of the education sector. The reverse is true for schools / colleges. This suggests that they each perceive themselves as having changed more through engagement with the Group. It could also point to a lack of visibility or understanding of changing practices between the two sectors.

Table 4‑1: Feedback on the effectiveness of the DYW Regional Groups (% saying "effective" or "very effective")

Liaison with the National Group

Liaison between the National Group and the Regional Groups is mainly through dedicated "Link Members".

4.10 The consensus amongst consultees was the Link Member model was good. However, in practice, there is a lot of variability in how this is being implemented, particularly in relation of the level of engagement and support provided by Link Members. There was one example of where a new Link Member had been appointed and it took seven failed attempts on the part of the Regional Group to secure a meeting with them.

4.11 This variability appears to be based on:

4.12 One consultee noted that DYW National Group members are not paid for their time as it is a volunteer role. The model is therefore dependent on a lot of "good will" on the part of Link Members to give up their time. There was a view that this might be difficult to sustain in the long term in the absence of tangible evidence of impact.

4.14 However, Board Members were less positive about the level of guidance provided by the National Group on which activities they should be prioritising. They were also less positive about the lines of communication from the National Group to the Regional Group, with less than half (39%) of survey respondents agreeing that these were "good". This was supported by feedback from the consultations and regional workshops.

"We submit our performance reports to the Scottish Government every two months. We don't get any feedback on how we are doing, or an overview of what is happening nationally or within the other Regional Groups." Regional Group Board Member

The findings suggest a general lack of awareness of the Link Member role amongst Regional Group Board Members, with the majority (71%) saying that they did not know if this was working effectively. Again, this was supported by feedback gathered through the consultations and workshops that the role of the Link Member was unclear and that there was high variability between Groups in terms of how this was being implemented.

Figure 4‑2: To what extent do you agree with the following statements relating to the DYW National Group? 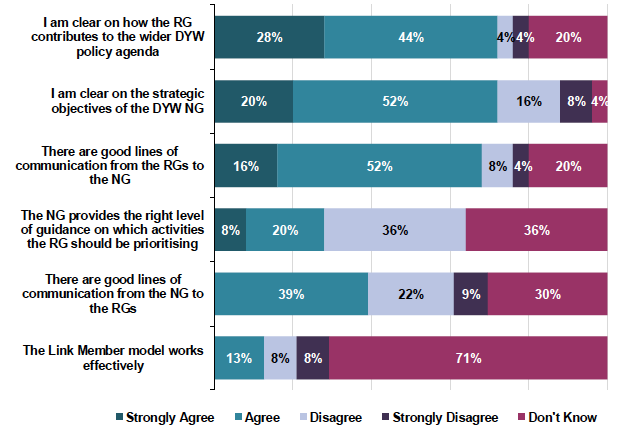 The Regional Groups each have a small executive team, who manage the day-to-day operation of the programme.

4.15 The executive teams within each of the four regions are based within the Chambers. They are typically made up of one Programme Manager / Director and two or three project executives. In one case, two Modern Apprentices have been recruited to the DYW team. In at least two cases, the DYW executive roles are co-funded by the Chamber and individuals in these roles have a broader remit than just DYW activities.

4.16 The executive teams typically have responsibility for:

The strengths and skills of the executive teams were highlighted as a key success factors for the Regional Groups.

4.17 Several consultees and survey respondents commented on the role of the DYW Executive Teams in driving forward the work of the Regional Groups. They were described as being highly flexible and responsive to the needs of employers, schools and wider stakeholders. The pace at which they operate was referenced by several consultees, with very short timescales from idea formation through to implementation.

"The main success, as always, has been the people. I have been very impressed by the regional group staff - committed, flexible, friendly, understanding of school constraints and helpful." School survey respondent

"If the team had not been in place, the group would have been much less effective. They make things happen." Local authority consultee

The majority of funding for the DYW Regional Groups goes on staff costs and other overheads, marketing / promotional events and project activity.

4.18 The four Regional Groups received grant awards of between £200k and £340k from the Scottish Government to support delivery of DYW activity in 2017-18. The contract award letters provide a breakdown of the allocation of this funding across different categories of spend. However, the level of detail provided is variable – ranging from two to eight categories of spend.

4.19 On the basis of the information that is available, and discussions with regional leads, there appear to be four main categories of spend:

4.20 The funding for the DYW Regional Groups has been used to leverage additional resource from the Chambers themselves (for example, through access to shared services, such as CRM systems, and co-funding of project executive posts), from other funders (such as the Princes Trust) and from employers (mainly in-kind). The extent of this leverage is potentially quite significant, but it is not possibly to quantify it at the moment as it is not being measured and reported in a consistent way.

The DYW Ayrshire Group used some of their resources to set up an Innovation Fund to support enterprise activities within schools.

4.21 DYW Ayrshire have set up an Innovation Fund, which schools in the region can bid into for financial support to deliver enterprise activities within schools. The grants awarded are typically between £5k and £10k. Matched funding is provided through the Princes Trust Cash Back for Communities Fund and in-kind resources (in the form of teaching support) are provided by the local college. The funded projects are mainly (although not exclusively) targeted at 'hard-to-reach' young people who are at risk of disengagement. The projects focus on activities aimed at developing their entrepreneurial and employability skills.