Given the importance of soil carbon (C) in Scotland and the Ministerial commitment made in September 2006 to focus on this issue, it is important that we gain more reliable estimates of changes in soil C stocks. The recently completed ECOSSE project highlighted the uncertainties in our knowledge in this area (Smith et al., 2007a,b). This project has allowed us to further develop and improve the ECOSSE model, quantifying and reducing the uncertainty of the estimates of C stocks in Scottish soils. The Scottish Executive and Welsh Assembly Government funded the development of the ECOSSE model to predict the response of mineral and organic soils to both land use and climate change.

ECOSSE uses a pool type approach, describing soil organic matter as pools of inert organic matter, humus, biomass, resistant plant material and decomposable plant material (figure 2.1). Material is exchanged between these pools according to first order rate equations, characterised by a specific rate constant for each pool, and modified according to rate modifiers dependent on temperature, moisture and pH of the soil. The N content of the soil follows the decomposition of the soil organic matter (figure 2.2), with a stable C:N ratio defined for each pool at a given pH, and N being either mineralised or immobilised to maintain that ratio. Mineral N may then be lost from the soil by the processes of leaching, denitrification, volatilisation or crop offtake, or C and N may be returned to the soil by plant inputs or organic amendments. The soil is divided into 5cm layers, so as to facilitate the accurate simulation of these processes down the soil profile. Each of the processes included in the model is simulated using only simple equations driven by readily available inputs, allowing it to be developed from a field based model to a national scale tool, without high loss of accuracy.

Figure 2.1 Structure of the carbon components of ECOSSE 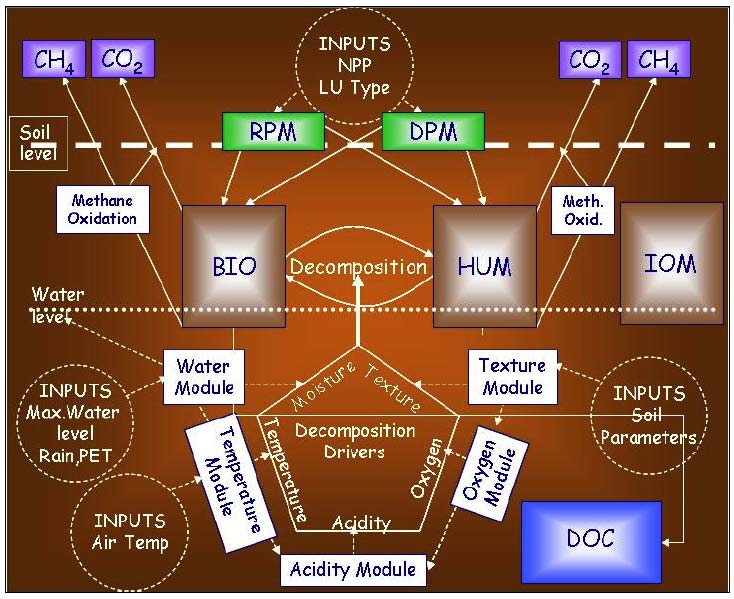 Figure 2.2 Structure of the nitrogen components of ECOSSE 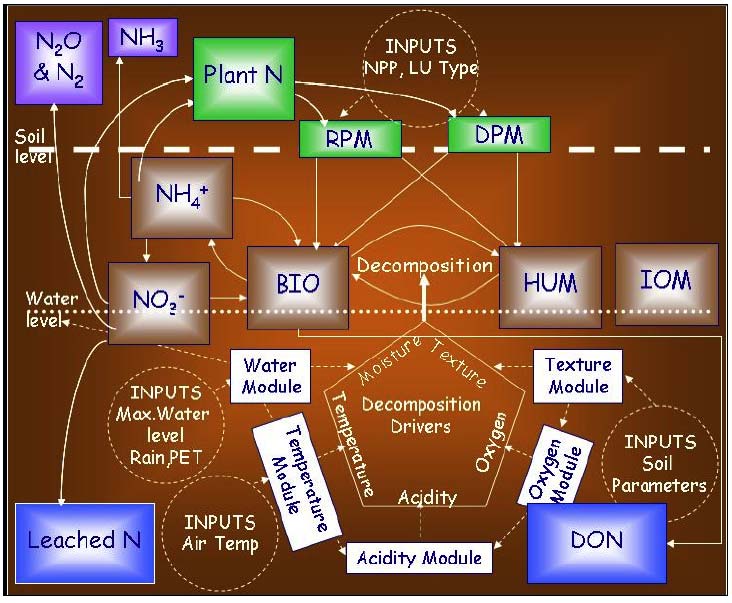 Within current RERAD-funded work packages at the Macaulay Institute ( MI), a resampling of the National Soil Inventory of Scotland ( NSIS_2) is underway, which will allow the change in soil C stocks since the 1980s to be determined. The full National Soil Inventory of Scotland ( NSIS_1) represents a point database collected on a 5km grid across Scotland (Lilly, et al., 2009). The samples were collected in the 1980's and analysed for site and soil characteristics at that time. For each grid point (total = 3094), a range of site and soil characteristics is available. A subset of points on a 10 km grid also includes details of soil chemical analyses with physical and chemical details relevant to individual soil horizons rather than selected depths. For NSIS_1 this included a total of 721 points. NSIS_2 is a resampling of a subset of the NSIS_1 points (180 samples on a 20 km grid). This is being conducted in three phases over the years 2007-2009. Data is being collected that will permit the calculation of the C stock at each location along with estimates of uncertainty. This will allow the data from the original sampling, collected between 1978 and 1988 ( NSIS_1), to be compared with data from the current NSIS_2 sampling. The resampling is limited to a depth of 1m, and so excludes soil C held in deeper peat layers, but will allow direct comparison of the changes in soil C between the NSIS_1 and NSIS_2 sampling times. The NSIS_2 resampling will:

i) Identify a statistically unbiased subset of the original 721 NSIS_1 locations that encompass the range of organic, organo-mineral and mineral soils found in Scotland, accurately recording the positions of sample sites for future relocation (using GPS), together with site and soil information.

ii) Measure the thickness and bulk density of soil horizons, following standard procedures and protocols, and record land use.

Phase 1 of the resampling (62 sites) was completed in June 2007 and provides an opportunity to use this data to define the uncertainty in the ECOSSE national estimates of changes in soil C. Phase 2 of the sampling will be completed in 2008, and will be used as a blind test of simulations of changes in C stocks produced during this project. Phase 3 will be completed in 2009, and are not included in the simulations done, as the detailed descriptions of the sites are not yet available.

It is important to take account of the varying definitions of peatland. In the original peat surveys of Scotland, peat was taken as an organic layer containing less than 30% ash with a depth of over 30 cm (Robertson, 1971). Later, under the Soil Survey for Scotland definition, peat should have an organic layer or layers that exceed 50 cm depth from the soil surface. The peat will typically have an organic matter content of over 60%. In the classification for England and Wales peat soils should have an organic layer (or layers) over 40 cm deep (within the top 80 cm of soil) or over 30 cm deep if overlaying bedrock with an organic C content of at least 12-18% (depending on the clay content) (Avery, 1980). Thus, there is some difference between what is considered as peat in these countries. In addition, in Scotland there are considerable areas covered by organo-mineral soils: soils with a surface organic horizon less than 50 cm deep. Particular problems of assessment of C stocks arise where, commonly, organo-mineral soils and peat are intimately mixed within the landscape in varying proportions making estimates of the spatial extent of the different soil types difficult. Blanket, or hill, peat occurs mainly in hill and upland situations where formation is directly influenced by climate (low temperatures, high rainfall) while basin peat, encompassing raised bog, forms in valley or basin sites initially under the direct influence of groundwater. Semi-confined (or partly confined) peat is intermediate between blanket and basin, being generally located in valleys, on terraces or between ridges and drumlins (Hulme, 1980). In the following report, "Peat Polygons" refer to either blanket or basin peat where there is 100% coverage by peat. There are also further subdivisions depending upon whether the peat is deep or eroded or both. " QM units" refers to other soil map units on the 1:250,000 scale map that contain a proportion of peat; this may be blanket, basin or semi-confined in nature.

The aims of the project are

1. Use of data derived from NSIS_2 to improve the accuracy of ECOSSE and its ability to predict the response of Scotland's organic soils to external change.

This will be achieved by the following objectives:

Objective 1: To undertake a geostatistical analysis of the minimum sample numbers required to produce a statistically significant value for total soil C stocks in Scottish peats.

Objective 2: To produce a short report on timescales, logistics and deliverables for a targeted resampling exercise to obtain a representative sub-sample of peats across Scotland (using a transect approach) to measure total depth and bulk density at 50 cm intervals. This will be undertaken after consideration of the results from objective 1.

Objective 3: To ensure that where feasible sites should be tied in with the NSIS_2 programme of work. Data derived from NSIS_2 should be used where appropriate such as depth of organic matter horizons where a probe has been used to gauge depths below 100 cm and any measures of bulk density made. Priority should be given to sites where there is limited historical data available.

Objective 4: To evaluate the possibility of using archived dry bulk density values for peat bogs to determine C stocks values retrospectively to supplement and enhance the estimate described in task 1.

Objective 5: To explore the costs and benefits of GPR and Lidar to measure peat depth and the potential for using these methods to monitor changes in soil C stocks in the peatlands of Scotland.

2. Use of ECOSSE to improve estimates of changes in soil C stock.

This will be achieved by the following objectives:

Objective 6: To feed in data derived from this project and NSIS_2 into the ECOSSE model to improve its accuracy and ability to predict the response of Scotland's organic soils to external change.

Objective 7: To run a series of simulations using ECOSSE to address a number of policy questions from the Scottish Government such as specific land use change and climate change scenarios.