Contents
Delivering for today, investing for tomorrow: the Government's programme for Scotland 2018-2019
The Legislative Programme 2018-19 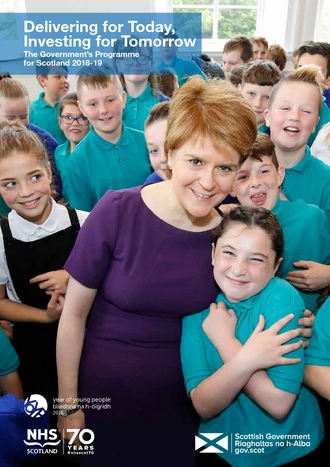 
We will introduce an ambitious legislative programme that drives forward sustainable and inclusive economic growth and shows our commitment to a fairer Scotland. The uncertainties of Brexit mean that the precise volume and timing of Brexit legislation that will need to be considered by the Scottish Parliament is still unclear. We will prioritise delivery of our legislative programme to ensure Scotland’s interests are protected. We will also continue work to enable us to deliver Bills on Gender Recognition and Forensic Medical Examinations for next year’s legislative programme.

Biometric Data
Following on from the recommendations of the Independent Advisory Group on the Use of Biometric Data, the Bill will deliver enhanced oversight of biometric data and techniques used for the purposes of justice and community safety. Subject to views expressed through a full public consultation, the Bill will establish provision for a statutory code of practice covering the acquisition, use, retention and disposal of such data which includes fingerprints, DNA and facial images. It will also establish a Parliamentary Commissioner tasked with overseeing the code and promoting best practice, as well as raising wider awareness in this evolving area.

Budget
The annual Budget Bill provides parliamentary approval for the Scottish Government’s spending plans, allocation of resources to our strategic objectives and supporting progress towards our vision of a more successful country, through increasing inclusive and sustainable economic growth.

Census
The Bill will permit National Records of Scotland to ask voluntary questions on sexual orientation and transgender status/history in the 2021 census and future censuses.

Disclosure
The Bill will make amendments to the Protection of Vulnerable Groups (Scotland) Act 2007 and Part V of the Police Act 1997 to support the modernisation of the policy design of the disclosure system. It will continue to balance safeguarding and proportionality, and provide a disclosure regime in Scotland that is more responsive to the needs of stakeholders.

Electoral Reform
The Bill will implement a range of electoral reforms, some of which will use the 2016 Scotland Act powers. These include proposals included in the recent Electoral Reform Consultation to extend the powers of the Electoral Management Board, and make changes to Boundary reviews. It will also include some technical matters, for example transferring oversight of the Electoral Commission to the Scottish Parliament.

Family Law
The Bill will make a number of changes to family law, in particular to further ensure that the child’s best interests are at the centre of any contact and residence cases. This includes regulation of Child Welfare Reporters, further protection of domestic abuse victims in contact and residence cases and ensuring that cases are dealt with effectively and efficiently by the courts.

Non-Domestic Rates
The Bill will deliver the ambition set out in the Barclay Review to enhance and reform the business rates system in Scotland to better support business growth and long-term investment and reflect changing marketplaces. Having already introduced the Business Growth Accelerator and Day Nurseries relief recommended by the Review, the Bill will include other measures to support growth including the move to a three year valuation cycle. The Bill will introduce measures aimed at improving the administration of the system including to reduce the number of appeals and improve the quality of information available to stakeholders. It will also deliver measures to increase fairness and ensure a level playing field by reforming a number of reliefs and tackling known avoidance measures.

South of Scotland Enterprise Agency
Following on from the Enterprise and Skills Review, this Bill will establish a new enterprise agency for the South of Scotland, to drive inclusive growth and ensure that the region benefits from a new approach that supports a diverse and resilient economy, sustains and grows communities, and harnesses the potential of people and resources.