Scotland is home to a large and vibrant Pakistani diaspora, many of whom maintain close links with communities in Pakistan. The community's contribution to Scotland, culturally, economically and socially, is significant. The Scottish Government is therefore committed to developing a strong bilateral relationship with Pakistan.

Currently in Pakistan there are 25 million out of school children and so the 2016 International Development Strategy includes improving Pakistani school attendance. This aim also reflects the aim of the Pakistani government who amended their constitution in 2010 to include the promise that the "State shall provide free and compulsory education to all children of the age five to sixteen years in such a manner as may be determined by law."

Furthermore, of the 25 million out of school children, 55% are female and this percentage increases to 66% in Pakistan's poorest areas. For those that do succeed in completing twelve years of critical education, attaining a higher education becomes an even bigger challenge. The Scottish Government therefore believes that creating educational opportunities for women and children would greatly benefit Pakistan, both economically and socially. The two resultant scholarship programmes are run by the British Council Pakistan on behalf of the Scottish Government.

In addition to our dedicated scholarship programmes from the IDF, the Scottish Government also provides skills development programmes in Pakistan from the International Relations budget. All of these projects are summarised in Annexes A and E, and there are links to each project's End Year Reports.

In 2013, the Scottish Government granted £300,000 to set up a Masters Scholarship scheme for Pakistani women, managed through the British Council Pakistan. The Scottish Government had been inspired by Malala Yousafzai, who continued to advocate girl's education even after she was horrifically attacked by the Taliban. By 2016, over 400 women had benefited from the programme. It was so successful and popular that in April 2017, Ministers approved a further two year programme, providing £650,000 from the Development Assistance budget to continue a new round of scholarships.

The Scholarship for Children Scheme:

The Scholarship for Children Scheme:

Rabia's father worked as a driver with a local bank. As the household only had one income, Rabia's dream of pursuing a masters fell low on the family's list of priorities. 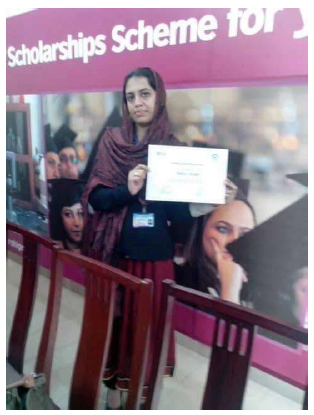 She came to know about the Scottish Scholarships through an advert posted on campus. With encouragement from her professor, Rabia applied for a scholarship:

"I found this scheme through an advertisement in my university. My professor explained how beneficial this scheme was for young Pakistani women facing problems in the way of their study and encouraged me to apply".

Given her excellent academic background, Rabia was awarded the scholarship. She has now successfully completed her masters and hopes to pursue an M.Phil as well. In the future, she wants to open schools in her village, where literacy rates are low and access to education is limited. Rabia is passionate about education and aims to empower every child in her village through education:

"Education is the key to success in life. I will use my own educational experiences to support and encourage children in my village…Without the Scottish Scholarship, I would not have been able to attain my Masters in Education and fulfil my dream of becoming an expert in my field."

4 Quality Education
17 Partnerships for the Goal

This year is Scotland's Year of Young People and so the Scottish Government aims to inspire Scotland through its young people, celebrating their achievements, valuing their contribution to communities and creating new opportunities for them to shine locally, nationally and globally.

"Year of Young People 2018 is an opportunity for generations to come together and celebrate our nation's young people." (Scottish Government, 2018)

In the spirit of Scotland's Year of Young People, the Scottish Government collaborated with the British Council in Pakistan and the Higher Education Commission of Pakistan to establish a project aimed at improving the research capability of young STEM researchers from Pakistan.

According to a post-visit survey, the project strengthened the research and teaching capacity of young Pakistanis who were enrolled in STEM related PhD programs through visits to different universities, science parks and centres, and interactions with faculty and students in similar fields.

The young PhD students were not only able to identify ways in which they can make their own research stronger but also effective ways of engaging their respective communities in STEM related activities, thereby promoting STEM more widely. Keeping within the spirit of Scotland's Year of Young People, the young scientists from Pakistan were presented with the opportunity to interact with Scottish youth. It served as a powerful message for children in Scottish Schools to hear from PhD students talk about STEM in Pakistan. The exchange has great potential for future mentorship programmes and also served to break barriers by presenting an image of Pakistan rarely seen in mass media.

The project had sustainability built-in, as the Pakistan Higher Education Committee had agreed to fund future visits. As a result, the project will continue to help meet Pakistan's needs for STEM education, including for women and girls.

The Scottish Government's International Relations Team therefore provides further supports project in Pakistan, as part of a wider focus on encouraging skills development in Pakistan. Some of those initiatives are outlined in Annex E, with an example discussed below being the Pakistan Scottish Apprenticeship Programme.