Contents
Brexit: protecting what matters - what's at stake for individuals in the Brexit talks
My World

Being able to play our part in tackling global issues

Scotland has always made its mark on the world. The Scottish Enlightenment spread Scottish ideas to the four corners of the globe. Today Scotland is no less international. Those who live here instinctively feel part of a wider world community, collaborating naturally with our European neighbours, so we can tackle together common challenges.

Right now the EU plays a key role in helping tackle global challenges. This is partly about what EU countries themselves do and partly about the influence they exert by working together as a bloc. Many of those interviewed highlighted the moral responsibility we have to help tackle 'the big' issues of our time, such as climate change, energy security, human trafficking and crime.

It is clear that people care as much about what Scotland as a country can give, as what we can gain. Scotland has a huge amount to offer, for example, the key role we play in EU-wide collective efforts on climate change (our targets are some of the most ambitious in the world), and on security (where we are the disproportionately active in Europol). We have a proud history in these and others fields and a great deal of contemporary world class science and other expertise we want to bring to the table.

By remaining a member of the EU we will safeguard in full our current ability to influence decisions and measures that have a global impact.

Staying in the single market would protect many of the relevant benefits, in particular ensuring that our voice is heard on the environment, social justice and human rights. It would allow us to make sure that our world class science and scientists continue to be inspired by the spark of EU counterparts and to have access to EU funding and collaboration which is unrivalled in the world.

In addition, we are arguing strongly in Brussels and elsewhere for continued full Scottish partnership in Erasmus Plus and future EU research and innovation framework programmes that benefit both Scottish students and Europeans coming to learn or work in Scotland.

Meanwhile, we are continuing to show leadership internationally, for example through our pioneering New Scots refugee integration strategy and the welcome we have extended to a third of all Syrian refugees coming to the UK. We are on track to meet our world leading interim 2020 target of reducing greenhouse gas emissions by 42%.

In a globalised world where serious organised crime, terrorism, human trafficking and the impacts of climate change do not respect national borders, we will not retreat into our shell but, rather, continue to champion and promote effective collaboration across national boundaries.

The examples below capture what individuals are saying to us in their own words about what's at stake for their world.

Christopher, 34, Recruitment, Renfrewshire. 'The Brexit vote came about out of fear of migration and refugees from non- EU countries. Regardless of Brexit, the international community will need to address the refugee crisis and as part of the EU the UK will be stronger collectively rather than going alone.'

Geoff, 44, Researcher, Stirling. 'Environmental problems, climate change and energy are "wicked problems", meaning they are difficult to solve for a number of reasons including the interconnected nature of these problems with other problems. By pulling the UK out of the EU, Brexit can only make solving these issues more difficult as we lose access to funding, expertise (including workers), the capacity for collaboration with EU colleagues and the potential imposition of tariffs and regulatory barriers.

Ada, 27, Researcher, Glasgow. 'There is a lot said about UK still sharing values and having a close relationship with the EU but if that doesn't translate into concrete measures, I'm not sure it'll be easy for the UK to contribute.'

Nelu, 52, Minister (of Religion), West Lothian. 'Britain as a lone voice will be less powerful than being part of a big block.'

Denislav, 30, Food and drink, Glasgow. 'The UK likes to flourish on its own but if the UK puts up a big fence around itself, how can it win?'

Matt, 31, Researcher, Glasgow. 'The UK currently receives far more research funding via the EU than it pays in, via schemes such as Horizon 2020. Without retaining access to these schemes Brexit will leave a gaping hole in the UK's science budget and stymie international collaboration, both essential to technology and business innovation.' 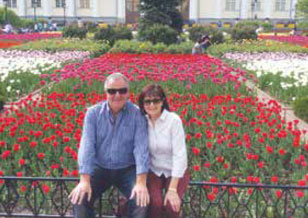 Ian is originally from Glasgow. After finishing his professional career in the printing industry, Ian and his wife decided to retire in Spain. His daughter currently lives in Edinburgh.

He is concerned about Scotland and the UK losing its influence in the international arena, as well as reducing its capacity to tackle global challenges:

'The world has become globalised. If you take climate change, for example, the EU is planning a transit towards a low-carbon economy and we take a lot of funding from the EU to achieve this. I don't see the UK will give the same priority to substitute that funding, and if the UK Government will be able to keep abreast with these developments. We will also lose our influence on security cooperation – such as Europol and other agencies – and nuclear cooperation. A decision like this would have made sense forty years ago, but now the UK cannot afford to be left on its own'.

He is also concerned about the difficulties the UK may face to strike trade deals with other countries:

'I can also see problems on leaving the customs union. At the moment the EU is the biggest trading bloc in the world. Why would you want to leave? It is very difficult to strike trade deals. They made a big fuss about the US, but it may be difficult to foster that special relationship as we have been promised by the UK Cabinet Ministers. The UK doesn't seem to have any plan on trade and the type of trade relationship they want with the EU. There is no expertise or knowledge about the time that may take to strike trade deals with third countries. Britain was always regarded as a nation with integrity. Brexit has created huge damage globally how other nations now view us and it could take many years to repair this.'