Contents
Brexit: protecting what matters - what's at stake for individuals in the Brexit talks
My Prospects

Being able to find good and secure job opportunities at home, and to study and work abroad

Everybody wants to know they have positive prospects – a good job, career progression and chances to develop new skills and knowledge. For young people, in particular, it is clearly important to have the widest range of opportunities.

Right now everyone in the UK benefits from being at the heart of a market of over 500 million people – a marketplace which is around eight times larger than the UK market alone. We know that a hard Brexit outside the Single Market, even if a free trade agreement is signed, could mean an estimated 6.1% decline in Scotland's economic output by 2030 compared to remaining in the EU – equivalent to a loss of £1,600 annually for each person in Scotland. If the UK reverts to World Trade Organisation rules this could rise to £2,300. [1] EU law provides absolutely vital protections in workplaces in Scotland on issues such as maternity and parental leave, health and safety and annual holiday entitlement, often of critical importance to the most vulnerable.

Under EU rules you can study, work or retire in any EU country. An estimated 1.3 million UK citizens [2] have currently chosen to live, work and study in other EU countries. Many Scots and people living in Scotland have taken advantage of this, studying abroad on the Erasmus programme (from which Scots are very high beneficiaries) or working in another EU country. The EU recognises qualifications undertaken in other members states, so if you're a nurse, insurance advisor, or security guard, you can work in other EU countries without having to re-train. This works both ways. We know that every non- UK EU citizens who exercises their right to work here brings not only their skills and knowledge but adds on average over £34,000 per year to our economy. [3]

Here, as elsewhere, the ideal way to protect Scotland's interests would be to stay in the EU. The evidence clearly shows that any other option damages people's prospects.

If that is not possible, then remaining in the Single Market and Customs Union – as the Scottish Government will continue to argue – would help to tackle each of the issues outlined above, safeguarding jobs and workplace protections and, crucially, ensuring Scottish businesses are able to continue to attract talented staff from the EU.

In addition, the Scottish Government will argue for the UK to continue to benefit in full from those measures which will still be available after Brexit, for example participating fully in Erasmus Plus, the exchange scheme for students, staff, youth volunteers and others.

We will also resist any attempt to use Brexit as a pretext to water down the Scottish Parliament's ability to protect the interests of workers in Scotland, such as helping ensure people's basic pay meets the costs of living, outlawing exploitative employment practices and encouraging workplace equality. We will use our new powers to implement a social security system based on dignity, fairness and respect.

We will argue for powers over migration so that we can have migration policies which meet the particular needs of Scotland, for example ensuring we have the labour we desperately need to give us the best economic prospects in the future. We shall also argue for a greater role for the Scottish Government in the development of future trade policy and trading arrangements to help protect businesses, communities and individuals from some of the damage that will be sustained from leaving the EU.

In the face of the uncertainty posed by Brexit we are taking action now, working closely with our economic development and skills agencies and with business. For example, we have already brought forward £100m of government spending on infrastructure, and have confirmed that eligible EU students starting a higher education course in the 2018-19 or 2019-20 academic years will pay no tuition fees for the duration of their course, building on our commitment to EU students already studying in Scotland.

The examples below capture what individuals are saying to us in their own words about what's at stake for their prospects:

Brian, over 65, Self-employed farmer, Argyll & Bute. 'The local community is heavily reliant on the resilience of upland and hill farming which are the types of farming facing the greatest uncertainty from Brexit. This is due to reliance of the single market for lamb exports and potential changes to farm support payments. I may have to downsize my farming operation by reducing livestock numbers.'

Claire, 39, Researcher, Argyll & Bute. Claire is originally from France. 'Most of the research funding my group has benefited from [in relation to marine biology] stems from EU funds. I am uncertain whether participation in and eligibility for EU schemes would be retained for UK-based researchers post-Brexit. I am also concerned that losing access to EU funding, would make me unable to maintain critical collaboration networks and attract the best EU researchers.'

Barry, Professional Services, Edinburgh. 'After the Brexit vote, some institutes in the EU are reluctant to partner with UK institutes because they believe that having a UK partner will damage their chances of success.'

Wing, 20, Student, Aberdeen. 'Personally, I'm a bit frustrated why Brexit happened. It's not beneficial for Scotland. I like travelling, how will Brexit affect my ability to go abroad? What about Erasmus, does it mean that we can't go abroad through this programme? There could also be less opportunities for me to work in the EU27.'

Youth Worker, 37, Shetland, originally from Romania. 'My main reason to move to the UK was because of the UK educational system and qualifications being recognised in the EU and other Commonwealth countries. I'm concerned that there will not be mutual recognition of qualifications. It's ironic that the reason we came here was it would open up more of the world, and it appears to be closing the world off.' 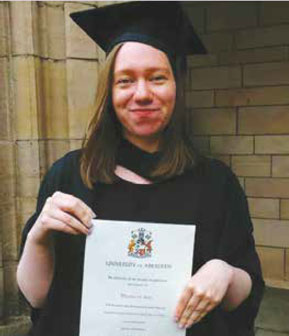 Nikki is studying Sociology at university and works for a charity providing support to victims of rape.

Nikki is concerned about how Brexit will impact on her future career prospects:

'Definitely affecting my future job prospects. Now that I'm doing my masters and looking to do a PhD, is it going to be more competitive now and potentially there will be less scholarships.

There is not going to be as much EU funding for Universities, especially in research based doctorates, so there could be less scholarships. A lot less opportunities to go to EU to do a PhD, no idea about what costs may be. Say I was doing a PhD in the UK and there was an opportunity, conference, interesting organisation, the chances to be invited could be reduced as I potentially may not be an EU citizen.'

My Quality Of Life
Introduction