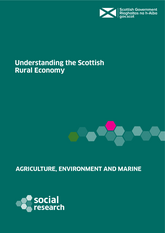 The economy of rural Scotland is both similar to, and tightly integrated with the economy of urban Scotland. However, distinct differences, often related to distance and scarcity, remain between urban and rural economies. The rural economy has undergone significant structural change over the past twenty years. This working paper sets out our current understanding of the Scottish rural economy, using the available data; develops the information on household and employment data and points to key challenges for the rural economy including broadband services, and fuel poverty. This paper does not deal with natural capital, ecosystem services or the wider public benefits supplied to or by businesses in rural Scotland. However, it supports a more detailed approach towards defining the rural economy as particularly industry sectors in Mainly Rural parts of Scotland develop differently than in the Islands and Remote Rural areas.