Contents
Understanding the patterns of use, motives, and harms of new psychoactive substances in Scotland
3. NPS Use among vulnerable populations in Scotland

3. NPS Use among vulnerable populations in Scotland

As described in the Methods chapter, we explored the use of the multiplier method (using a treatment multiplier) to estimate the prevalence of NPS use amongst vulnerable groups in Scotland. This analysis concluded that it is not currently possible to generate a reliable estimate of overall prevalence.

As a result, this chapter focuses on estimates for one of the key target groups (injecting drug users), where data from the NEO 360 database were more robust. It also describes patterns of NPS use amongst each of the key groups, based on responses to the NPS survey, and presents the perceptions of staff in services about prevalence of NPS use amongst their clients, based on responses to the staff survey.

3.1.1 NPS and other drug use amongst NPS survey respondents 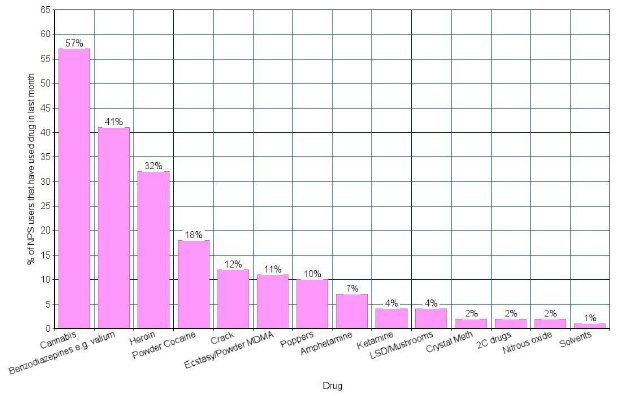 Base: 252 respondents who reported ever taking NPS

Preferred route of administration varied by substance (detailed in figure 3.2). For people who had used NPS in the last 6 months:

Both stimulant-type NPS and mephedrone were taken in more diverse ways:

Fig 3.2: Reported NPS use and preferred route of administration [45] 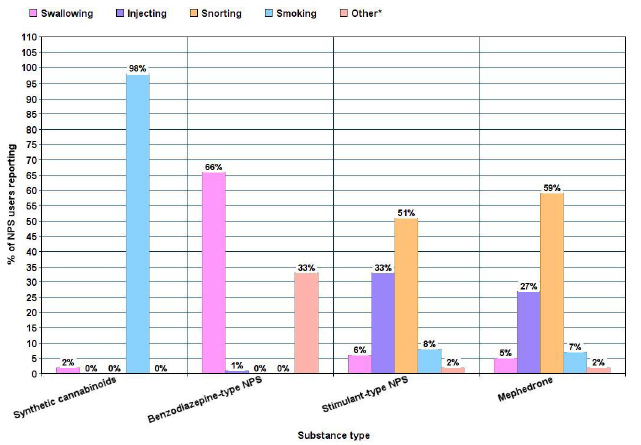 The NPS survey provides information on 141 people who inject drugs. The levels of NPS use recorded were high. 96% (n=136) of this group reported ever using NPS. The most frequently reported NPS used by this group in the last six months were:

Amongst all PWID, 33% (n=47) reported injecting NPS in the last six months. This was almost exclusively stimulant-type NPS including mephedrone, ethylphenidate and cocaine-type NPS:

Nine people reported currently injecting NPS. For those that did, the average frequency for injecting was 5 times per day and people reported incidences of equipment sharing and poor injecting technique such as not filtering [49] ,'missed hits' [50] or using citric acid [51] which is not required for the majority of NPS.

PWID were most likely to source NPS from:

All respondents used NPS with other drugs.

One respondent reported using NPS only, with the rest combining NPS use with traditional drugs.

The NPS survey gained information from 92 people currently affected by homelessness, this included people in homelessness projects and rough sleepers. It found that 87% (n=76) had ever used NPS. The most frequently reported NPS used by this group in the last six months were:

All respondents used NPS with other drugs.

The NPS survey gained information from 70 men who identified as MSM. It found that 54% (n=38) had ever used NPS. The most frequently reported NPS used by this group in the last six months were:

There were small numbers using other types of NPS including benzodiaepine-type NPS (13%, n=5) and synthetic cannabinoids (10%, n=4). All respondents used NPS with other drugs.

From the 30 MSM who answered where they sourced NPS from, respondents said they got NPS from:

Fig. 3.3: Staff perception of client drug use by percentage of client group presenting for NPS, traditional drugs or both 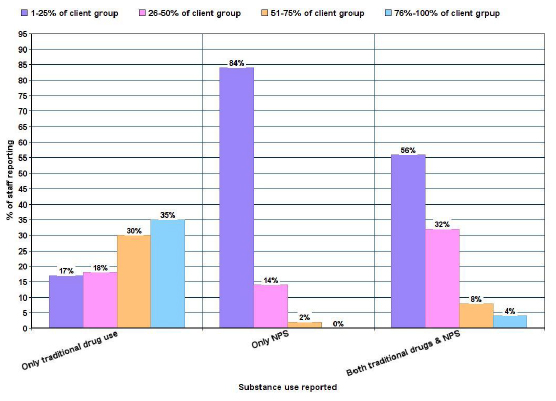 When asked about how patterns of presentation in relation to NPS use and traditional drug use had changed over the previous six months, overall staff felt that things had remained largely the same. This is described in Fig. 3.4 overleaf.

This suggests that trends are not consistent across all regions and all services, but that there has potentially been a slight upward trend in presentations related to NPS use to services since the autumn of 2015. 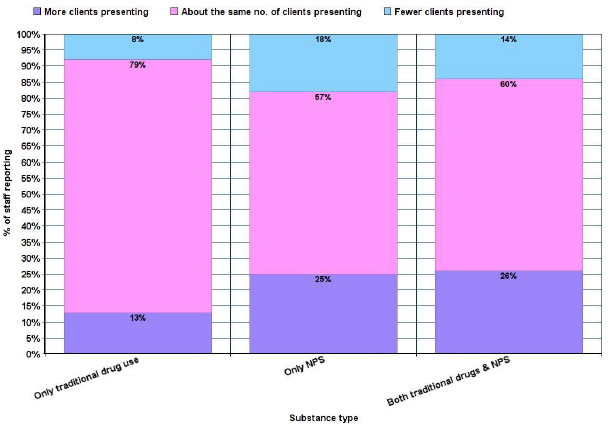 Nonetheless, this chapter has begun to develop our knowledge of patterns of NPS use amongst key vulnerable groups in Scotland. Of those completing the NPS survey, over half reported having ever used NPS, although the last six month use rate was lower. This could suggest a downward trend in NPS use, or a high rate of NPS experimentation compared to continued use. Staff perceptions of trends were of an overall slight upward trend in NPS-related presentation, although these varied geographically and by type of service.