Contents
Understanding the patterns of use, motives, and harms of new psychoactive substances in Scotland
1. Introduction

1.1 Background to the Study

New (or Novel) Psychoactive Substances ( NPS) are a category of substances, either manufactured or plant based, which seek to imitate the effects of illegal drugs [5] . These substances are commonly, although misleadingly, referred to as 'legal highs'.

Globally, in recent years the number of NPS being reported has grown exponentially. Since 2008, 644 NPS have been reported to the United Nations Office on Drugs and Crime ( UNODC) Early Warning Advisory on NPS. This has included a widening of the the profile of substances being reported to include new groups of substances [6] . Notifications to the EU Early Warning System have also risen rapidly, from 14 in 2005 to 98 in 2015 [7] .

Often, newly reported NPS are derivatives of previously reported substances with a slightly modified molecular structure [8] . This has resulted in a rapidly changing drug use landscape [9] with some NPSs remaining on the market for a long time (such as mephedrone and other cathinones) with others only being reported briefly before disappearing from the market [10] .

Prevalence of NPS use in Scotland from traditional drug prevalence estimates such as the Scottish Crime and Justice Survey ( SCJS), and Scottish Schools Adolescent Lifestyle and Substance Use Survey ( SALSUS) suggests that use amongst the general population is low. SCJS found just under 2% of adults reported that they had taken any NPS (powders, pills, herbal mixtures or crystals that are sold as 'legal highs'), at some point in their lives. Use of NPS was higher amongst younger age groups, with 4% of 16-24 year-olds reporting having ever used 'legal highs' [11] . The 2015 SALSUS survey highlighted that 13% of 15 year olds had ever been offered NPS. However, a lower proportion reported use: approximately 5% of 15 year olds reported ever using one or more NPS, and of these, 2% reported having taken at least one NPS in the last month [12] .

However, there are limitations associated with these estimates. SALSUS is a school-based survey, and the SCJS is an opt-in household survey. This means that they are unlikely to capture young people who may be absent, truant or excluded from school, and the marginally housed [13,14] .

There is also a need to better understand the harms associated with NPS use. Over the last few years, Scottish statistics on Drug Related Deaths ( DRD) [15] have shown a significant increase in the recording of NPS present at time of death, rising from four deaths in 2009 to 112 deaths in 2015. The profile of NPS-related deaths follows a fairly typical pattern to other DRDs in Scotland, with those experiencing fatalities being on the whole from vulnerable populations. In addition, poly-drug use is common, and in the majority of cases, traditional drugs either play a key role in that death, or remain the main cause of death.

From the NRS DRD figures in 2015, NPS were implicated in 74 deaths, with 3 where NPS were the only substance present. The most commonly implicated NPS in these 74 deaths were benzodiazepine-type NPS such as phenazepam, etizolam, and diclazepam [16] .

1.2 The Legal Context of NPS in Scotland

The Psychoactive Substances Act 2016 ( PSA) [17] makes it an offence to produce, supply or offer to supply any psychoactive substance if the substance is likely to be used for its psychoactive effects, regardless of its potential for harm. The only exemptions from the Act are those substances already controlled by the Misuse of Drugs Act 1971 ( MDA), and nicotine, alcohol, caffeine, medicinal products and specified foodstuffs.

Prior to the PSA coming into force, the two key legal instruments which affected the production, supply, and possession of NPS in the UK were the Misuse of Drugs Act ( MDA) 1971 and Temporary Class Drug Orders ( TCDOs) 2011.

1.3 Aims and Objectives of the Study

The aim of this study is to provide data on the patterns of use, motivations for and harms of NPS use amongst the following groups:

The research questions driving this project were as follows:

In recent years, there has been much public debate about NPS use in Scotland. There is limited evidence on prevalence of use in Scotland, however anecdotal information has been reported to national drug agencies, and drug monitoring groups in Scotland. Early concerns were raised by frontline services, including Accident and Emergency departments who were identifying acute NPS intoxication, and mental health services who were reporting both new and existing patients with significant issues potentially linked to NPS use. From as early as 2009, enquiries about NPS were being made to national drug support and information agencies, including Scottish Drugs Forum. It was established through information and training requests that NPS use was an emerging issue faced by homelessness services, and services for looked after and accommodated children and vulnerable young people. The use of NPS in these settings proved to be a significant issue for staff in terms of management of people who use NPS, but also in terms of the harms that people who use NPS were experiencing.

More recently, there have been concerns about use among existing intravenous drug users, particularly injectors in Edinburgh and Lothian who were experiencing injecting-related injuries as a consequence of ethylphenidate injecting. In some cases this included outbreaks of serious bacterial infections [20] . There have also been ongoing concerns about substance use, and particularly NPS use in MSM who are engaging in drug use for the purpose of enhancing sex, known as 'chemsex'. The extent and nature of 'chemsex' in Scotland has been the subject of much discussion [21] . However, while specialist services have developed in England, Scotland has struggled to identify any patterns in reported use, and developing appropriate responses has been hampered by a lack of data.

There has also been evidence of NPS use in acute mental health services, with NPS use identified in over a fifth of admissions in Edinburgh inpatient wards [22] .

It is worth noting that some of the patterns of use observed elsewhere in the UK and in Ireland have not been reported in Scotland. For example there was evidence of stimulant injecting reported in Ireland [23] when there seemed to be very little of this pattern of use being observed or reported in Scotland. The question of whether such behaviours were being missed or whether they could be predicted to develop is partly answered in this report.

This research is focused on the five vulnerable groups described above. These groups have been selected for two reasons. Firstly, the emerging picture suggests there are distinctive issues amongst these groups where problem use is a significant feature. Secondly, an improved understanding of use in these groups can contribute to an improved response to NPS use in Scotland.

"Any substance which is capable of producing a psychoactive effect in a person who consumes it, and is not an exempted substance [i.e. alcohol, tobacco, medicines and controlled drugs, caffeine and foodstuffs such as nutmeg and chocolate]…A substance produces a psychoactive effect in a person if, by stimulating or depressing the person's central nervous system, it affects the person's mental functioning or emotional state… A person consumes a substance if the person causes or allows the substance, or fumes given off by the substance, to enter the person's body in any way." [24]

In this study, the approach taken was to work with, and use, participants' own understandings of what constitutes NPS, or as participants commonly called them, legal highs or 'legals'. They did not always distinguish NPS from 'traditional' drugs, and often did not know about, or in some cases care about, the legal status of a given substance. As a result, the analysis presented here follows the participants' understandings of NPS, regardless of their legal status at the time of writing, data collection or event recalled.

Unlicensed benzodiazepines : Of particular note is one substance group which differs in some ways from other NPS. Anecdotal evidence from services suggested high rates of unlicensed benzodiazipine use. 'Unlicensed benzodiazepines' refer to benzodiazepines classified as medicines in other countries in Europe and elsewhere, but not licensed for medical use in the UK. These include substances such as Phenazepam, Etizolam and Dicalzepam. Their comparatively recent availability in Scotland, the fact that they have been sold in shops and online and their inclusion as NPS in DRD figures in Scotland coupled with anecdotal evidence from services has led to their inclusion as NPS for analysis within this study. For the purposes of this report we will refer to them as benzodiazipine-type NPS.

Chems: A final point to note is the use of the term 'chems' in the gay community and amongst MSM more widely. 'Chems' is an all-encompassing term which can include both NPS and what might be described as more traditional drugs. Where specific drugs are named in definitions of chemsex, these tend to be crystal methamphetamine, mephedrone and GHB/ GBL. Amongst MSM, the term G is used to refer to both GHB and GBL, thus the term 'G' or GHB/ GBL will be used.

In February 2016, the Scottish Government published the results of a stakeholder consultation on defining NPS [25] . This found a strong consensus for utilising the Drugs Wheel model [ Fig.1, below] to classify psychoactive substances.

Therefore, within the broad definition described above, substances were categorised according to their effects. The Drugs Wheel categorises both traditional and NPS substances in this way. This approach is useful for this research because it reflects the way that users commonly categorise the substances they take - i.e. that they are like another substance with a similar effect - rather than being concerned with other possible categorisations - legal status or route of administration, for example. 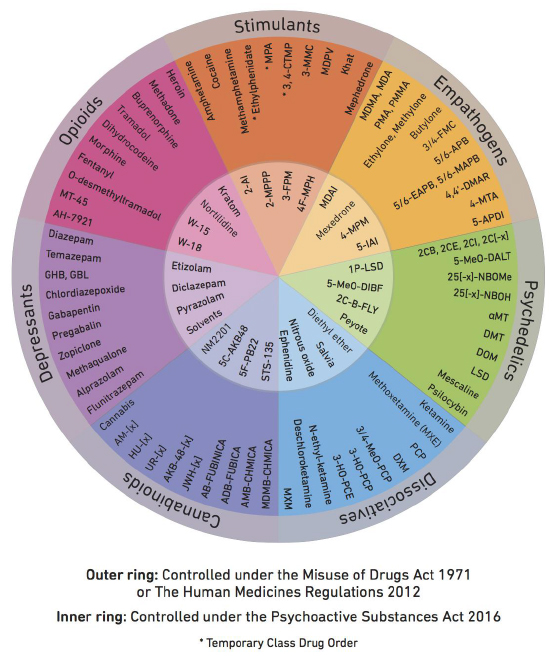