Survey and focus group participants were shown two sets of photographs and asked to rate them against a number of attributes on a five-point scale.

The photo sets were designed around two themes which would be present in Social Security Scotland’s written materials: 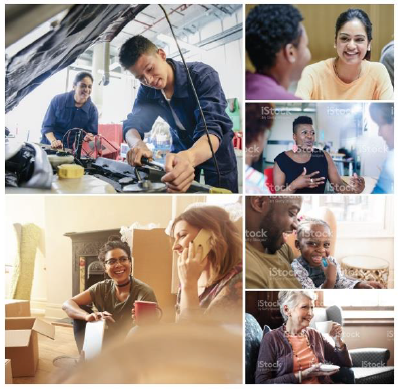 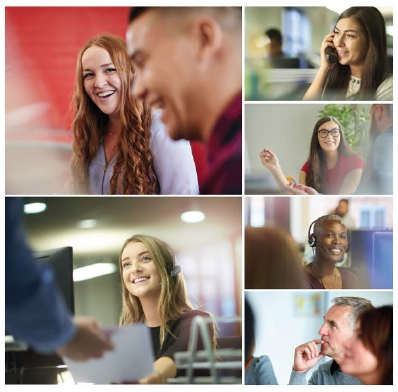 It was made clear to participants that the photo sets shown to them were concepts created using stock photos and were not the final photos intended to be used by the agency. Participants were asked to consider the style, themes and ideas presented in the photos. Each set of photos was rated separately.

Survey participants were broadly positive about photo set one, though slightly less so than photo set two.

Survey participants largely agreed with the attributes suggested for the staff photos.

The areas in which participants were more often negative about the photo sets were around inclusivity, ‘reflects my community’ and authenticity. Both survey and focus group participants were mixed in their feelings around these attributes.

Those who felt the photos were not inclusive, authentic or both commented:

“As far as I can see no images of disabled people which would be a fairly large part of people using the service.”

“…there are no clients of Oriental extraction. No headscarves despite Scotland’s significant Muslim population…”

A recurring point of discussion in focus groups was whether photos should show clients and staff looking happy. For some, this was inauthentic and did not accurately reflect their past experience of claiming social security:

“they are extremely happy and healthy. I don’t know of a job centre whose client group is remotely reflected in these images.”

“I don’t like the idea of the site being replete with happy, smiling people when the majority of users will be neither particularly happy or smiling, Seeing such pictures somewhat invalidates user’s feelings”

Others felt that photos of smiling clients and staff gave the impression of friendliness and warmth:

“If the intent was to portray a positive, approachable vibe, I believe it succeeds”

For others, a lack of authenticity was evident in how clients dressed:

“I am taken to challenge anybody that says they are on benefits who is dressed like that.”