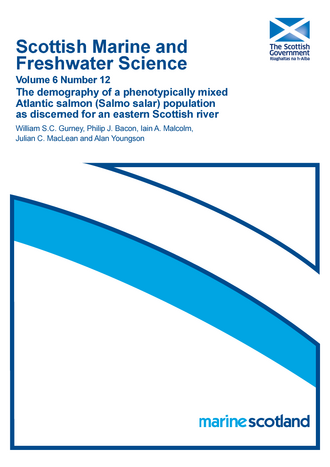 It is widely acknowledged that Atlantic salmon ( Salmo salar) sub-stocks exist in Scottish rivers. These sub-stocks are associated with diverse life-histories, relating to different environments and pressures. However, there are significant challenges associated with the analysis of populations at the sub-river scale.

This report investigates the potential for assessment of fish populations at a sub-river scale. A sophisticated mathematical model was used to separate salmon from a single river (North Esk, eastern Scotland) into three sub-stocks, based on the number of years the adults have spent at sea (their sea-age) and the month of the year in which the adults return to freshwater to breed (their run-timing).

The model showed that the three proposed sub-stocks were characterised by different trends in abundance over time, and dissimilar patterns of fecundity and recruitment of juveniles. These findings were underpinned by extensive data spanning three decades and were robust to three wide ranging marine mortality scenarios (a process which is poorly understood). However, despite the North Esk being the best studied river in Scotland, detailed examination of the consequent productivity estimates showed that the overall situation was inadequately described by the current combination of data and models.

Nevertheless, the findings illustrate the potential benefits to salmon management of describing a fishery that is composed of disparate sub-stocks in terms of its component parts, rather than assuming a single, common, stock. Attention is also drawn to the challenges and risks of transferring fishery management criteria between well-studied rivers and rivers with less detailed information, where those rivers are characterised by markedly different sub-stock compositions.

Modelling an Atlantic salmon (Salmo salar) population as three phenotypically homogeneous sub-stocks showed different sub-stock dynamics and time-trends, a finding which was robust to three quite extreme variations of marine-mortality scenarios. A process-centred demographic analysis of a phenotypically mixed population (river North Esk, eastern Scotland) separated the life-cycle into two portions: density-dependent (spawner to smolt), represented by a stock-recruitment relationship; density-independent at sea and in both the estuary and river during return to spawning sites. Extensive data spanning three decades was judiciously used to parameterise the model for three phenotypically distinct sub-stocks (early-running multi-sea-winter; late-running multi-sea-winter; and one-sea-winter). Quantification of different population parameters was achieved for the putative sub-stocks, illuminating historical population-trends and underlying mechanisms. The approach forms a template for similar model decompositions at other rivers with similar data. Broad implications for salmon management more widely included the enhanced benefits of a process-based life-cycle model that described more phenotypically homogeneous sub-stocks (than a single-stock formulation) for the transport of population parameter values (or derived Biological Reference Points) from well documented (parameter-donor) catchments to data-sparse (parameter-recipient) catchments.