*industry estimate of projected tonnage based on stocks currently being on-grown.

Table 27: Percentage (by weight) of annual production by growth stage harvested during 2009-2017

In 2015, the last year for which survival can be calculated, the survival rate from smolt input to harvest increased to 79.1%. Of the 2016 year class, 59.9% of the input has been harvested, 5.2% higher than the average harvest of fish one year after input in the 2015 year class. In 2017, there was no harvest of fish from the 2017 input. This was a decrease compared with the proportion of fish harvested from the same year class in 2016.

The total number of smolts put to sea in 2017 was 46.1 million. This smolt input comprised S1s (44.7%) and S½s (55.3%). There was no production of S1½s or S2s in 2017. Just under 3% of the smolts stocked to Scottish salmon farms were sourced from outwith Scotland, less than 1% of which came from sources outwith GB. This was a very slight decrease compared with the proportion observed in 2016.

* The survival of the 2008 smolt input in the South West is over 100% due to the practice of putting smolts to sea in one region and subsequently moving them to another sea water site in another region for harvest.

In 2017, the total number of staff employed in salmon production was 1,431, a decrease of 55 compared with 2016. The staffing figures collected refer specifically to the production of Atlantic salmon and do not include figures for staff involved with processing or marketing activities. Productivity increased from 109.6 to 132.6 tonnes produced per person.

In 2017, the majority of fish were produced in seawater cages. There were 26 tonnes of production from seawater tank sites in 2017. This reflects the high installation and running costs incurred in operating seawater tank systems. Most seawater tank capacity has been re-deployed for the production of other species of marine fin fish or salmon broodstock.

Sea cage capacity decreased by 959,000 m3 during 2017 and the number of sea cage sites in production decreased by 26. Production efficiency in sea cages, measured as the ratio of fish weight in kilograms produced per cubic metre, increased to 9.9 kg/m3. In cage sites, the ratio of production (expressed in kilograms) to cage capacity (expressed in cubic metres) was 8.4, 8.1 and 9.9 in 2015, 2016 and 2017 respectively.

Figure 3: The distribution of active Atlantic salmon production sites in 2017 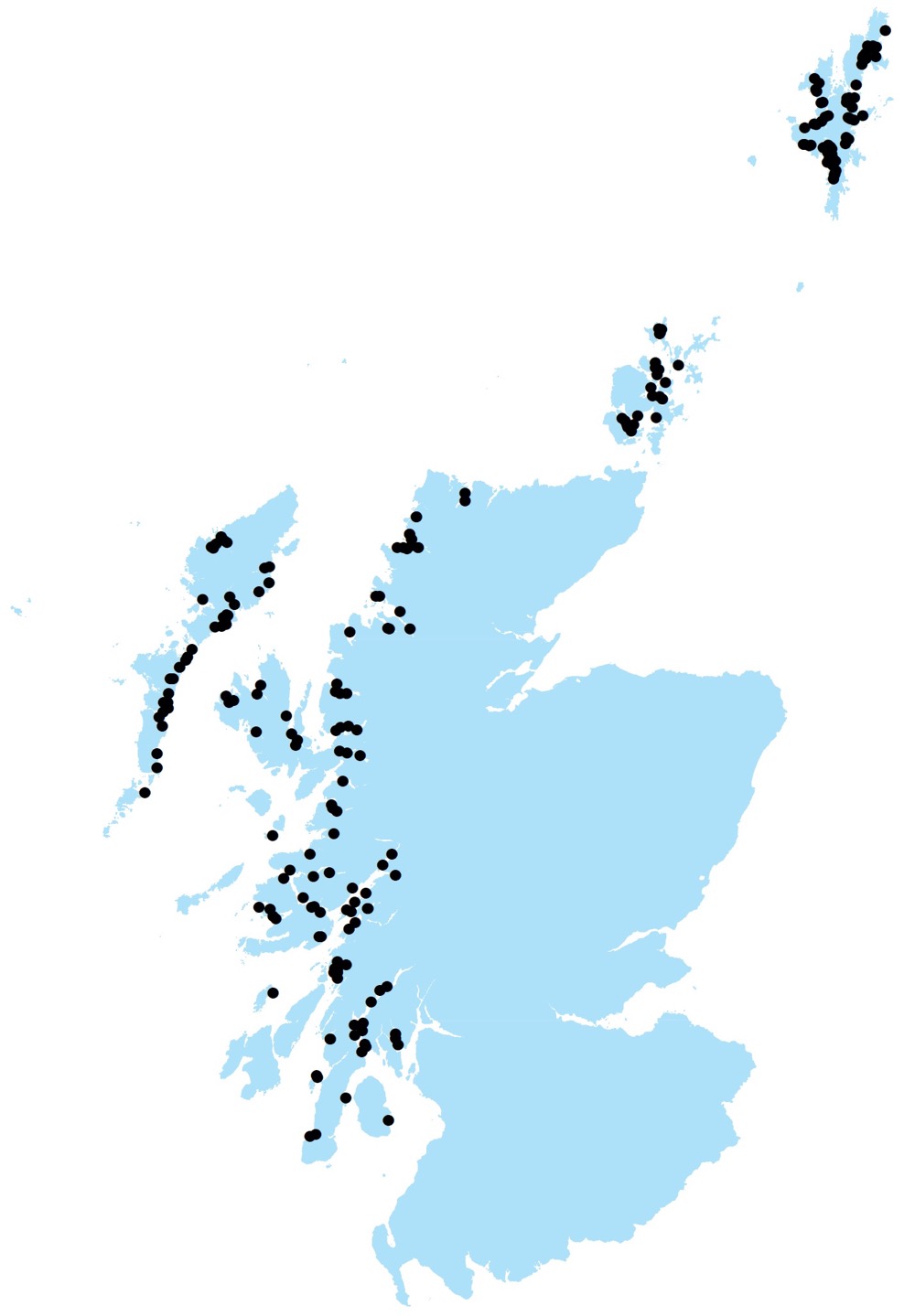 Scale of Production by Site

Table 33: Number of sites shown in relation to their production grouping and percentage share of production 2007-2017

* Includes farms stocked but having no production.

Table 34: Number of companies grouped by production (tonnes), staff and productivity (tonnes per person) during 2016-2017

Table 36: Number of companies and sites engaged in the production of Atlantic salmon during 2007-2017

The number of companies authorised and actively producing Atlantic salmon in 2017 was eight, a decrease of two from 2016. Four companies remained active and authorised, although not producing salmon for harvest in 2017. This continued the trend of Atlantic salmon production becoming concentrated within fewer companies. These 12 companies had 226 registered active sites, although not all these sites produced fish for harvest in 2017.

Of the 222 seawater cage sites recorded as being active in 2017, 40 sites were fallow for the entire year whilst 142 sites were fallow for a variable period. There were 40 sites that did not fallow in 2017. The normal production cycle in seawater varies in length between 12 months and two years and a fallow period at the end of production can break the cycle of disease or parasitic infections.

In 2017, the number of freshwater and seawater sites holding broodstock increased by one. The number of sites holding broodstock in any one year can be variable, as can be seen from the previous years' figures, which indicate no obvious trend. A total of 4,776 fish were stripped, yielding 12.6 million ova, giving an average yield of 2,638 ova per fish.

Of the 222 active Atlantic salmon seawater cage sites in 2017, five were certified as organic, producing 4,644 tonnes.

There were five incidents involving the loss of 30,009 fish from seawater Atlantic salmon sites in 2017. There were six additional incidents reported where the companies confirmed there was no loss of fish.