* Industry estimate based on stocks currently being on-grown.

Table 1b: Production (tonnes) for the table trade during 2007-2017 according to weight category

Table 1c: Production (tonnes) for the restocking trade during 2007-2017 according to weight category

Table 2: Numbers of sites grouped by tonnage produced during 2007-2017

Production was reported from 28 of the 44 active sites. The number of producers in the size bracket 101-200 tonnes increased while those in the <1-25 tonnes, 26-100 tonnes and >200 tonnes size brackets decreased. These figures do not include those sites specialising in the production of ova or young fish for on-growing.

Table 5: Number of staff employed and productivity per person during 2004-2017

Table 6: Production and staffing by area in 2017

Productivity was greatest in the West at 326.4 tonnes per site and 95.0 tonnes per person.

Figure 1: The distribution of active rainbow trout sites in 2017 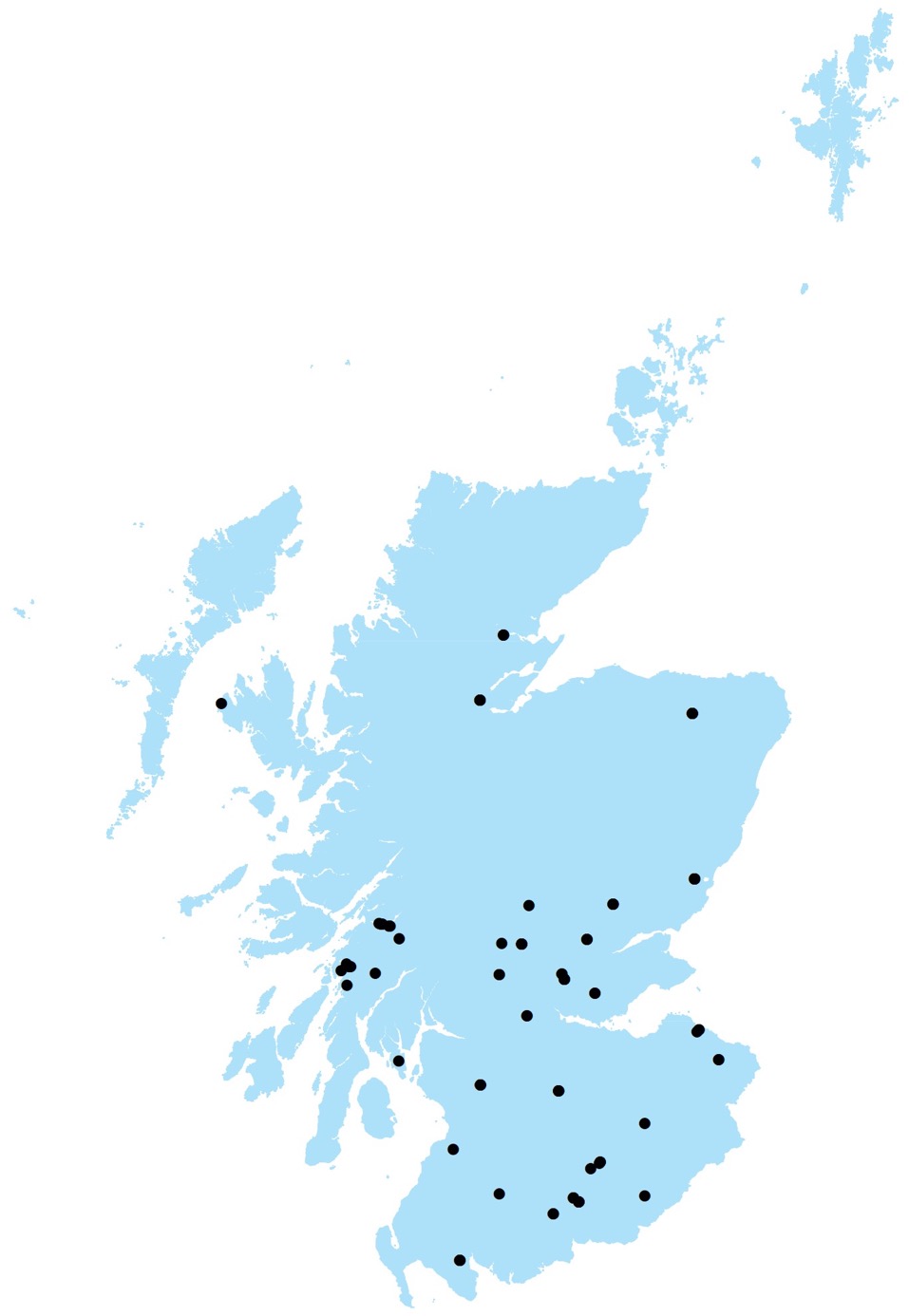 Type of Ova Laid Down

Source of Ova Laid Down

In 2017, the total number of eyed ova laid down to hatch decreased by almost 2.9 million (29%) on the 2016 figure. The proportion of ova from GB broodstock increased to 8.1% of the total and the rainbow trout industry remained reliant on imported ova. Data on the importation of ova into Scotland are also available from the health certificates and are shown in Table 9a. Any discrepancy between the figures in Tables 8 and 9a is due to data being obtained from two independent sources.

Table 9b: Seasonal variation in numbers (000’s) and sources of ova imported into Scotland from outwith GB during 2017

Suppliers within the European Union (EU) accounted for 86.7% of ova imported into Scotland during 2017 with Norway accounting for the remaining 13.3%. To maintain their ability to regulate production throughout the year and produce a constant supply of fish for their markets, producers have to rely upon supplies of out of season ova. In recent years there has been a trend for producers to import part grown rainbow trout into Scotland from outwith GB.

Trade in Fry and Fingerlings

Vaccines continued to be used as a preventative treatment against enteric redmouth disease (ERM), a potentially serious bacterial infection, caused by Yersinia ruckeri. Vaccination is generally carried out as a bath treatment at the fingerling stage, although some vaccines are administered by intra-peritoneal injection. A total of 5.4 million fish were vaccinated on 18 sites.

Of the 44 sites recorded as being active in rainbow trout production in 2017, none were certified as organic.

There was one incident involving the loss of 216 fish from a rainbow trout site in 2017.