An efficient transport system is essential to Scotland's economy, communities, environment, health and general well-being. Transport is important to everybody in Scotland, allowing them to reach workplaces or schools, have access to shops or services, visit friends and family and enjoy leisure services. Improving transport and the associated transport choices in Scotland plays an important role in achieving the Scottish Government's overall Purpose:[59] to focus Government and public services on creating a more successful country, with opportunities for all of Scotland to flourish, through increasing sustainable economic growth.

Two key transport National Indicators that are used to measure Government progress use Scottish Household Survey (SHS) data are: reduce traffic congestion; and, increase the proportion of journeys to work made by public or active transport.

Transport Scotland publishes the SHS transport and travel data directly.[60] The Transport and Travel in Scotland publication includes information on households' access to cars and bikes, frequency of driving, modes of travel to work and school (including an update to the National Indicator), use and opinions of public transport and access to services. The SHS Travel Diary publication provides information about travel by adults, including journey purposes and the means of transport used amongst others, as well as an update to the congestion National Indicator.

The SHS also provides a range of other transport-related information that can be used to understand travel patterns and choices across Scotland as well as monitoring progress on Scotland's Transport Strategy.[61] This sets out current policy which aims to improve journey times and connections, reduce emissions, and improve the quality, accessibility and affordability of transport. This chapter focuses on the number of cars available to households and possession of driving licenses.

Table 8.1: Number of cars normally available to the household for private use by Urban Rural Classification

Table 8.2: Number of cars normally available to the household for private use by net annual household income

Household income in the SHS is that of the highest income householder and their partner only. Includes all adults for whom household income is known or has been imputed. Excludes refusals/don't know responses.

There are clear links between access to a car and the level of deprivation of an area which are shown in Figure 8.1. Forty five per cent of households in the 15% most deprived areas of Scotland[62] have at least one car available to them compared with around three-quarters (73%) in the rest of Scotland. This difference is more pronounced when looking at households with two or more cars; one-in-ten households (10%) in the 15% most deprived areas have two or more cars available to them compared with almost three-in-ten (29%) in the rest of Scotland. Part of the reason behind these findings will be the link between multiple deprivation and the urban rural classification, i.e. most areas in the 15% most deprived are urban areas.

Figure 8.1: Number of cars normally available to the household for private use by Scottish Index of Multiple Deprivation 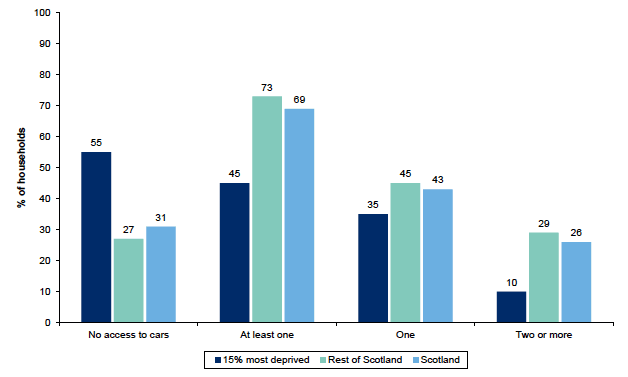 This demonstrates that the overall increase in the number of cars on Scotland's roads has arisen from a widening of availability of access to more households coupled with an increase in multi-car ownership. Though at the same time, the slight downturn in 2011 in multi-car households does suggest financial pressures as evidenced in chapter 6 may be making an effect on how many cars households can afford to run. 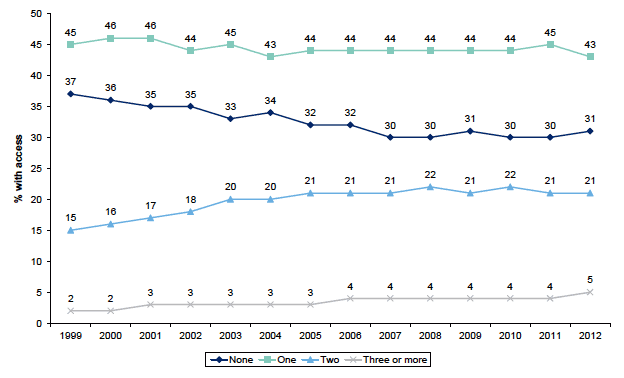 As Figure 8.3 shows, just over two-thirds (68%) of adults hold a full driving licence with a higher proportion of males (76%) holding a licence as compared to females (62%) - the proportion of females represents a two percentage point increase from 60% in 2011. The percentage with a full licence peaks for females within the 35 and 44 age group (75%) and for males between the ages of 45 and 59 (86%). There are significant differences between driving licence possession amongst most age groups for males and females, however these are most pronounced in those aged 60 and over. Around 29% of females aged over 75 have a licence compared with 71% of males.

Figure 8.3: Adults who hold a full driving license by gender within age 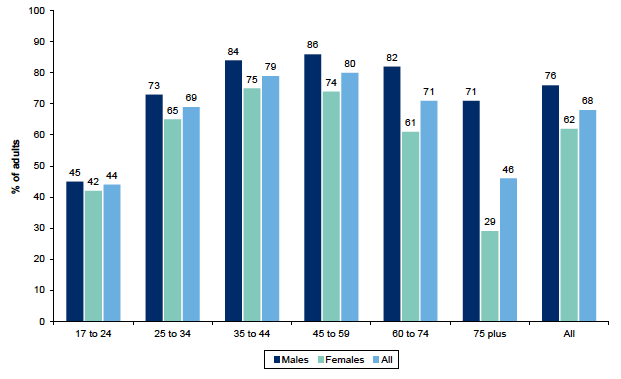