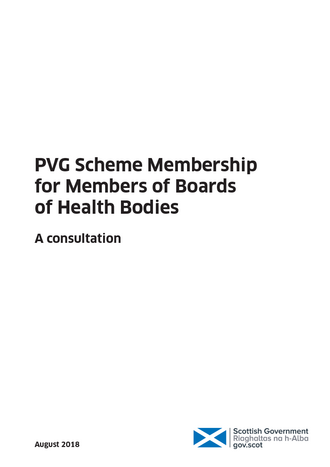 7. Currently, there is no consistently applied approach to background checks for Board Members. For executive members, who are employees of the Board, guidance on the level of check required is set out in the NHS Scotland PIN Policy on Safer Pre and Post Employment [1] . This states that the level of check should be dependent on their role. For Chairs and non-executive members, this guidance does not apply as they are not employees of the Board and there is no legal requirement for them to undertake any form of background check prior to appointment. Instead, people applying to Boards are asked to pass a ‘Fit and Proper Persons Test’, which is conducted during the appointment process.

8. In the context of public appointments a Fit and Proper Person is an individual who is suitable for appointment because they meet the requirements of the role, and their past or present activities (and/or behaviours) mean that they are suitable to be appointed. Candidates are asked to declare: any conflicts of interest; their conduct to date; that they can meet the time-commitment; and, that they will observe and adhere to the Principles of Public Life in Scotland and the Model Code of Conduct for Members of Devolved Public Bodies in Scotland [2] .

9. The Model Code of Conduct for Members of Devolved Public Bodies forms part of the ethical framework introduced under the Ethical Standards in Public etc.. (Scotland) Act 2000 [3] Complaints and breaches of the Code of Conduct are investigated by the Commissioner for Ethical Standards in Public Life in Scotland and where appropriate, sanctions are applied by the Standards Commission if it finds that there has been a breach of the Code.

10. The Model Code of Conduct is based on the Principles of Public Life in Scotland, which are: duty; selflessness; integrity; objectivity; accountability and stewardship; openness; honesty; leadership; and, respect. These principles are consistent with the values of NHS Scotland as set out in Everyone Matters [4] which are: care and compassion; dignity and respect; openness, honesty and accountability; and, quality and teamwork.

11. The new approach to Executive Leadership and Talent Management [5] in NHS Scotland puts NHS Scotland values at the heart of recruitment for executive level posts. This compliments recent work done to embed values based recruitment in the appointment process for Chairs and non-executive members of Health Bodies. Implementing PVG Scheme membership for all Board level positions is consistent with the values of NHS Scotland.

12. The Lampard Report [6] , published in 2015, was commissioned by the Department of Health following investigations into the abuse of individuals by Jimmy Savile on NHS premises. The report identified themes and lessons learnt and made recommendations for the NHS in England and Wales, the Department of Health and wider Government. The recommendations focussed on tightening NHS guidelines and procedures governing volunteers, safeguarding arrangements and vetting procedures.

13. In response, Scottish Government officials reviewed the current policy position in view of the recommendations, and confirmed that arrangements to fulfil many of the recommendations were already in place. However, in May 2017, Boards of Health Bodies were asked to consider the themes identified in relation to some of the culture and process issues raised in view of their impact on individual behaviour in the workplace. This included, how individuals’ perception, trust and power relate to organisational effectiveness/safety and public protection through ensuring openness and accountability. This should include reviewing the vetting procedures for those at the very top of the organisation and ensuring that the appropriate checks have been carried out.

14. A basic disclosure is the most common and lowest level of disclosure available, whilst it includes information on any 'unspent' convictions, spent convictions are not included and the certificate is only valid when it's created and not for a specific length of time. It provides a ‘snapshot in time’ and is not updated.

16. A PVG scheme record confirms that the individual concerned is not barred from regulated work and includes all unspent and certain spent conviction information. It also contains any other non-conviction information that the police or other government bodies think is relevant. Disclosure Scotland continually monitor PVG scheme members' records for vetting information including criminal convictions that may affect their suitability to work with vulnerable groups.

17. Whilst discussions with Disclosure Scotland concluded that membership of the PVG Scheme for members of the Boards of Health Bodies was appropriate, introducing this policy will require further secondary legislation. A comparison of the different types of disclosure certificate is attached at Annex B .

18. The Protection of Vulnerable Groups (Scotland) Act 2007 (“the PVG Act”) was created in response to recommendations of the Bichard Inquiry Report [8] published in June 2004, following Sir Michael Bichard’s inquiry into the murder of two schoolgirls in Soham in 2002. The PVG Act created the legislative framework for a strengthened, robust and streamlined vetting and barring scheme for those working with children and protected adults in Scotland. This scheme is referred to as the PVG Scheme. It prevents people who are known to be unsuitable, on the basis of past behaviour, from working with children and/or protected adults and detects those who become unsuitable while in the workplace.

19. Only those who have regular contact with vulnerable groups through the workplace, or who otherwise fall within the description of ‘regulated work’ are required to be PVG Scheme members. It is not possible to provide a definitive list of roles, or types of employment that constitute regulated work, not least because the structure and description of people’s work is constantly changing. Instead, the 2007 Act defines regulated work by reference to the activities a person does, the establishments in which a person works, the position that they hold (this being particular relevant for the proposals in relation to Board members), or the people for whom they have day to day supervision or management responsibility.

20. Whilst members of the Boards of Health Bodies are not routinely required to undertake regulated work with children and/or protected adults, they are in positions, which, by their very nature, put them in a position of power and trust in respect of those who work with vulnerable groups. They can access a range of premises, including hospitals and are in a position to influence organisational policy and practice.

21. Part 4 of Schedules 2 and 3 of the PVG Act specifies a list of positions for those who, while not routinely carrying out duties with children or protected adults that would otherwise bring them within the definition of “regulated work”, are to be treated as being in regulated work. Positions which are specified include: