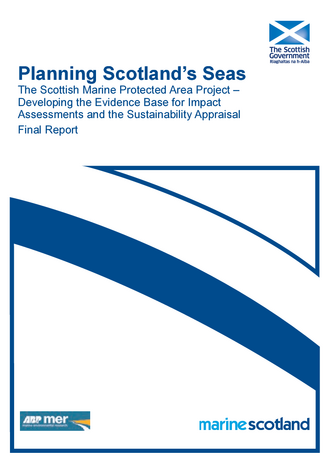 This appendix provides an overview of existing and potential future activity for military activities relating to Scottish waters and outlines the methods used to assess the impacts of potential MPAs on this activity.

The military defence sector makes use of the Scottish coastline for the location of bases and training and use of the sea for training, test and evaluation activities and the surveillance and monitoring of waters to detect and respond to potential threats. In this assessment military interests comprise the use of the coast and seas by the Royal Navy (submarine bases, jetties and exercise areas), Army (training camps and firing ranges), Royal Air Force (bases, coastal Air Weapon Ranges and Danger Areas) and MoD (Defence Test and Evaluation Ranges to trial weapon systems) (Baxter et al, 2011).

A list of sources to inform the writing of this baseline is provided in Table C9.1.

C9.3.1 Location and intensity of activity

Military activities occur in both inshore and offshore waters around the Scottish coast. All coastal military locations and the full area available for military training and other defence activities are shown in Figure C12. Principal marine-related defence activities include sea transport by naval vessels and sea training. Activities relating to maritime transport are mainly associated with naval bases and the only naval base in Scotland is Her Majesty's Naval Base (HMNB) Clyde at Faslane. Sea training is carried out within defined military practise and exercise (PEXA) training areas. Although the PEXA cover large areas of sea, military exercises cover only a proportion of these areas at any one time and are restricted temporally to a number of weeks per year. A major training exercise each year is the Joint Maritime Course in which Navy, Army and RAF exercises are conducted off the Scottish North West coast and which last for two weeks (UKMMAS, 2010). Two major NATO training exercises (Joint Warrior exercises) also take place each year in April and October. It is also noted that there is a regular military low flying area which partially overlaps with the Small Isles potential NC MPA.

Defence activities do not generate a tangible output and therefore cannot be valued. However, one can examine the expenditure within relevant departments, e.g. the Commander-in-Chief (C-in-C) Navy Command which is responsible for the operation, resourcing and personnel training of ships, submarines and aircraft (UKMMAS, 2010).

Specific defence projects may provide significant employment opportunities. For example, with respect to future aircraft carriers, building the hull sections and outfitting the vessels will provide work for about 10,000 people, including 3,500 at the two Clyde yards and 1,600 at Rosyth, Fife at the project's peak (UKMMAS, 2010).

Owing to the confidential nature of military defence activities it is difficult to assess likely future trends, however future employment will be governed by the forth coming spending cuts within the Ministry of Defence. In addition there are plans to build the next generation of submarines, which may be constructed in Scotland as in the past.

In the absence of information on future activity levels, it is assumed current locations and levels of usage will continue throughout the period of the assessment.

Many of the activities of the MoD have the potential to interact with MPA features. Underwater noise associated with SONAR use and military weapons trials may impact MPA features, and litter such as spent ammunition, depth charges and rockets will enter the marine environment. Weapons trials may cause surface and sub-surface abrasion to the seabed habitat and species, in some cases resulting in a direct loss of habitat. Associated synthetic pollutants may also enter the water column. Of lesser concern is the death or injury of mobile species by collision with military vessels, and the possible introduction or translocation of non-indigenous species ( JNCC & NE, 2011).

Despite the potential for such interactions with MPA features, the infrequency of military activities and existing MoD procedures should ensure that environmental impacts are minimised.

As a public authority and operator, MoD is required under the Marine and Coastal Access Act 2009 and Marine (Scotland) Act 2010 to carry out its functions and activities in a way that will further, or least hinder, the conservation objectives of MCZs. The Secretary of State for Defence's Safety, Health, Environmental Protection and Sustainable Development in Defence policy statement directs MoD to introduce management arrangements which, so far as is practicable, ensure that outcomes are at least as good as those required by the European Union's Environmental Impact Assessment Directive, from which military activities are exempt ( JNCC and NE, 2011). To assist in meeting its environmental obligations, MoD has developed a Maritime Environmental Sustainability Appraisal Tool ( MESAT). This will include operational guidance to reduce significant impacts of military activities on MPAs.

For the purposes of the assessment, it is assumed that MoD will mitigate the impact of military activity on MPA features through additional planning consideration during operations and training (as provided through the revisions to MESAT) and during coastal military activities covered by Integrated Rural Management Plans.

For the MCZ IA, MoD provided a national estimate of cost impacts associated with meeting its obligations as a public authority (Annex H10 of Finding Sanctuary et al, 2012). It was not possible to break this information down by site owing to the confidential nature of military activities.

Similar assumptions have been adopted for the Scottish MPA assessment, for both the 'lower' and 'upper' scenarios and this will also be presented as the 'intermediate (best) estimate'. After MPA designation, the management of activities in MPAs will be decided on a site-by-site basis and may differ from the assumptions in this assessment.