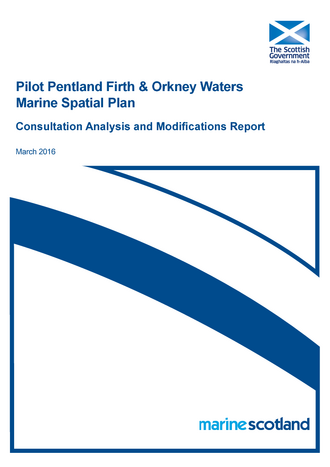 This report presents an analysis of the responses received from a consultation on a draft pilot Pentland Firth and Orkney Waters Marine Spatial Plan (the Plan) and associated documents. The report also lists modifications and changes suggested by the consultation responses and the working group response and action taken. The purpose of this format is to provide a clear link between the responses received and the changes made to the Plan.

The report begins with an outline of the number of responses received and which stakeholder groups were represented. This is followed by an overview of the comments received in relation to specific questions on the approach taken to develop the Plan and the responses received to a question asking for any other comments. This section contains a table of the key points and a response from the working group on the action taken and the lessons learned for future regional marine plans.

The comments received for Sections 1, 2 and 3 of the Plan and each of the General and Sectoral policies are dealt with individually. A standard format is followed by providing a brief analysis of the responses received, outlining the main themes of the comments and a table of suggested modifications and the action taken by the working group in response to these suggestions. A similar format is used for the question relating to future development of Regional Marine Plans.

The responses relating to the supporting documentation from the consultation are dealt with in a different manner. Many of the comments received on the Sustainability Appraisal and the Socio-Economic Baseline Review will be considered in the Strategic Environmental Statement ( SEA) Post Adoption Statement that will be published with the final Plan, so a brief overview is given here to avoid repetition of information between documents. The Regional Locational Guidance has been updated on the basis of comments received and the main changes are provided in a table. The Business Regulatory Impact Assessment and Equality Impact Assessment will be updated as necessary and published with the final Plan.