The level of spend available to NHSScotland is significant and it is important that it is managed effectively to deliver the best results for patients and good value for public funds. This is achieved by planning and managing financial performance across the whole of the budget, not only its constituent parts. The totality of the resource available to the Scottish Government Health and Social Care Directorates is therefore used fully and effectively.

The bulk of the above expenditure lay with the 22 NHS Boards, all of which achieved their financial targets in line with projections, all with unqualified accounts for the fifth year in a row. The £4 million underspend represents less than 0.1 per cent of the Health budget and has been achieved through the more efficient delivery of a range of policy programmes across the Scottish Government Health and Social Care Directorates.

The strong financial position was maintained while directing additional resource in key clinical priorities such as:

This report does not present the full accounts of NHSScotland, which form part of the overall Scottish Government consolidated accounts. The audit of the Scottish Government consolidated accounts for 2012/13 is unqualified. Audit Scotland has reviewed the accounts of all NHS Boards for 2012/13 and given an unqualified audit opinion on each. It will provide an independent commentary on NHSScotland finances in its health sector overview report.

NHSScotland's revenue expenditure of £10,712 million in 2012/13 represented over £2,000 for every person living in Scotland. Around 52 per cent of this funds staff costs for NHSScotland employees. A further 10 per cent goes on prescription drugs; 12 per cent on general medical, dental and ophthalmic services; with the remaining 26 per cent funding buildings and associated running costs, equipment, supplies and services.

Capital expenditure was £542 million in 2012/13 and showed a breakeven position. The money was used to fund numerous NHSScotland projects across the country such as the New South Glasgow Hospitals Project. When completed in early 2015, the £842 million publicly funded 'super campus' will deliver a truly gold standard of healthcare on the Govan site with maternity, children's and adult acute hospital and laboratory services all together on one site for the first time in Glasgow. The new adult hospital sits alongside the new children's hospital and both will be linked via a subterranean tunnel to the new £90 million laboratory which is already operational having opened last year. The project - which is the largest single NHS hospital building project ever undertaken in Scotland - is on track to be delivered on time and on budget at the beginning of 2015.

Through the use of revenue finance we are developing five major capital projects within health and a pipeline of Primary Care and community projects via the hub initiative. Projects with a total value in the region of £750 million via the Royal Hospital for Sick Children and Department of Clinical Neurosciences in Edinburgh, North Ayrshire Mental Health and Community Hospital, Dumfries and Galloway Royal Infirmary, Scottish National Blood Transfusion Service development and re-provision of services at Balfour Hospital in Kirkwall.

All Boards met their 2012/13 financial targets. 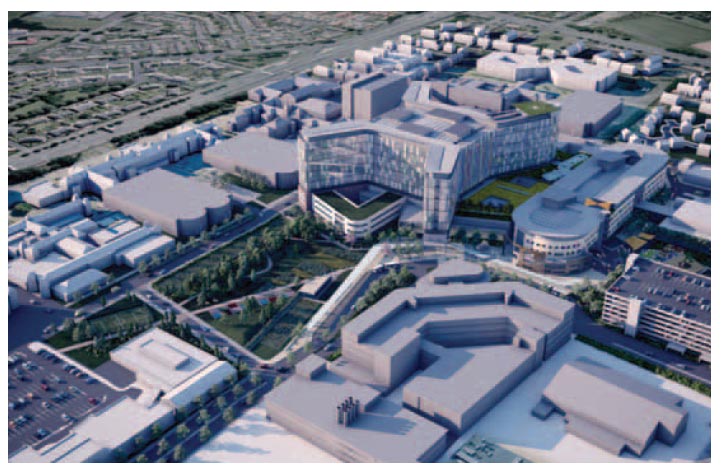 The new South Glasgow Hospitals Campus, NHS Greater Glasgow and Clyde, will deliver a truly gold standard of healthcare on the Govan site, with maternity, children's and adult acute hospitals, and state of the art laboratory services all together on the one campus.
It will also have the biggest critical care complex and one of the biggest emergency departments in Scotland.