Annex A: What we have heard from the discussion

Speaking to businesses and communities 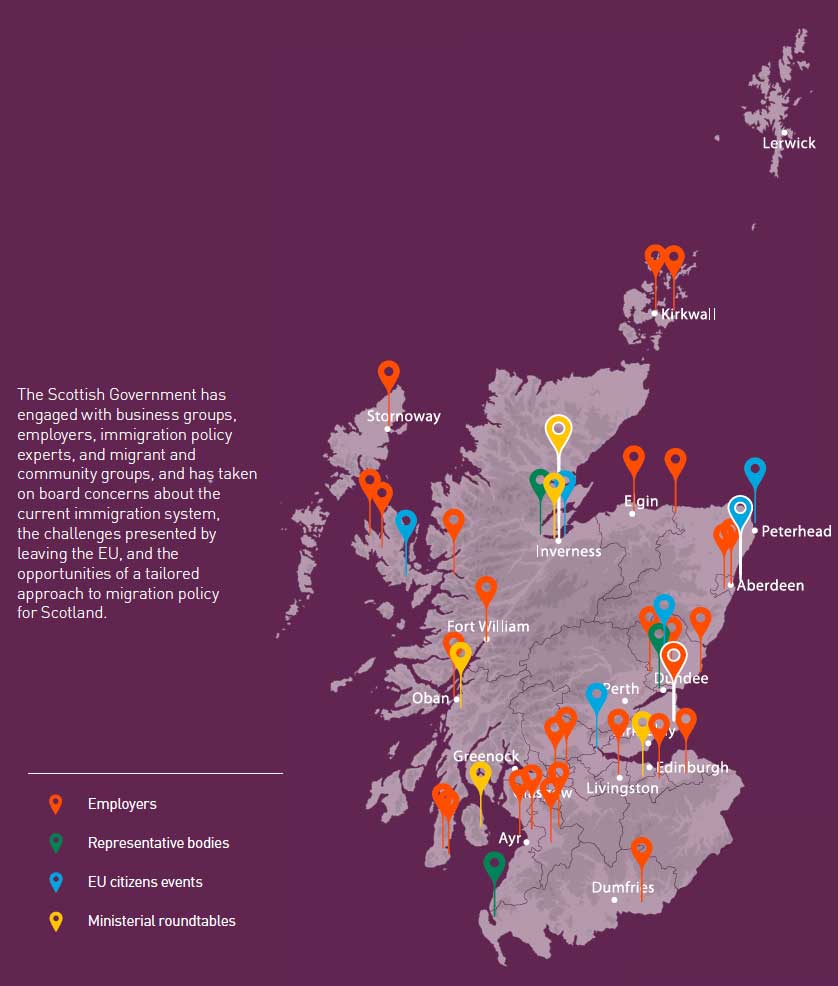 Tourism makes a significant contribution to Scotland’s economy, particularly rural areas such as the Scottish Highlands. The industry accounts for around one in every twelve jobs in Scotland and in 2017 spending by tourists generated around £14 billion of economic activity in the wider Scottish supply chain and contributed around £8 billion to Scottish GDP.

There are approximately 21,000 EU nationals working in tourism, which is around 11.5% of employment in the sector. It is estimated that 90% of the workforce in Distribution, Hotels and Restaurants earn below £30,000. This rises to over 96% of the non-UK workforce.

Migration Minister Ben Macpherson met sector leaders in a roundtable discussion in Inverness. The consensus was that labour mobility and access is the most pressing issue as is the impact of restricted labour to the industry supply chain, particularly during high season.

Concerns were raised about lack of interest from the resident population in pursuing a career in tourism leading to a greater reliance on non-UK workers. Stakeholders also noted the perception that roles within the sector were ‘low skill’ is purely based on salary thresholds and disregard the complex needs of the sector.

Scotland’s Rural College estimates that over 9,000 non-UK seasonal workers are employed on Scottish farms every year, the majority of whom come from other EU countries. Scotland accounts for around a quarter of UK strawberry production and the soft fruit sector is of considerable value to the Scottish economy with an estimated income of £134 million in 2017.

Migration Minister Ben Macpherson visited Allanhill Farming Company, near St Andrews, which supplies strawberries to major supermarket chains and employs over 500 workers in the season, many of whom return to work year on year with some being promoted to supervisory and managerial roles.

The business relies mainly on Polish, Bulgarian and Romanian seasonal workers to harvest the crop. However during the 2018 season it experienced a labour shortfall of around 12%. Allanhill, like many producers, are concerned that the loss of free movement and the uncertainty around Brexit will considerably exacerbate current labour shortages.

The new seasonal workers pilot scheme has been welcomed, with recruits making up 25% of their workforce in 2019. However, candidates were late arriving due to recruitment and visa issues which led to labour planning issues.

The Camphill movement provides a mutually supportive environment, a home and meaningful work for all those involved and openly encourages volunteers to come from all over the world to join, live in and work in their communities.

Migration Minister Ben Macpherson visited the Camphill community at Newton Dee, where there are around 200 people within the community, nearly half of those being villagers with special needs and the other being co-workers and their families. Co-workers and villagers live together and as a result there are no on/off duty times within households ranging from four to sixteen people.

Volunteers from other EU countries shared their concerns about the potential impact of Brexit and worries that they would not be able to continue to live in the UK or have similar access to the EU volunteers.

The Scottish Government has engaged with a wide range of stakeholders across Scotland to explore their current experience of the UK immigration system. This has included Ministerial roundtable discussions, visits and meetings, and workshops and requests for input led by officials.

Many of the stakeholders spoken to expressed concerns about the current process of sponsorship, the means by which employers can bring international talent into the UK to work. The system of sponsorship has been in operation in the UK for over ten years.

The main concerns raised about the current system of sponsorship centred on its cost, complexity and issues relating to compliance.

The complexity of the process also increases the likelihood of errors being made by the sponsor or the employee, the repercussions of which were felt to be disproportionate. A sponsor could lose their licence for a relatively minor, unintentional error – if for example an employees was audited and found to be fulfilling tasks not detailed in their job description. This disproportionate risk was seen to unfairly disadvantage smaller businesses which are unlikely to have the capital or resources to successfully challenge the revocation of their sponsor licence.

Concerns were also raised that given the cost, complexity, and risks for those taking part in the sponsorship process, the system could not be scaled up quickly and effectively enough to satisfy labour force demand in the event of free movement ending. Some questioned whether large numbers of employers engaging with the sponsorship process for the first time would get the support they need, and whether the Home Office would find adequate resources to maintain a complex, admin-heavy process on a far larger scale than previously.

The current international immigration system includes salary and qualifications thresholds, with the expectation that similar thresholds would apply to EU citizens in future. There is no salary (or skills) requirement to come to the UK under freedom of movement.

The UK Government has placed a strong focus on ‘skilled migration’ and uses qualifications and salary as measures to assess skill levels. Many respondents raised concerns that this definition of “skilled work” excluded important skilled professions, vital to Scotland’s economy (one example given was that of dairy stockmen who can earn over £30,000, but where there are no formal training schemes or qualifications to measure the skill level of this role, which is based on experience). One suggested solution was that sector bodies could be employed in an endorsing capacity to help with the definition and measurement of skill for roles in their sector.

The salary threshold potentially prevents migrants coming to the UK in entry-level jobs and developing their career here, incentivising only “top” jobs, leaving lower skilled, lower paid work for the resident population. In rural communities and in an era of high employment there is often not a resident population seeking this work.

Concerns were also raised that pay progression in some roles is not realistically reflected in the requirements for those wishing to renew their visas or apply for indefinite leave to remain. This is particularly pronounced for ‘new entrants’, young graduates who have a lower initial salary threshold of £20,800 but must meet higher thresholds at renewal and settlement. This potentially removes skilled workers from the UK labour force and prevents workers settling in the UK.

It was also recognised that the current system has no means of measuring the social value of workers – to their communities and to the wider economy. Social care is often quoted as an example of a profession with high social value but for which there is no route within the current immigration system. With average annual salaries of £17,000, this falls far short of the £30,000 threshold and when extended to EU citizens will have a devastating effect on a workforce already facing shortages.

The current system is viewed by stakeholders as overly bureaucratic, placing significant administrative and financial burdens on employers and individuals. The view was that the process takes too long, is complex, inflexible and the rigid focus on salary and qualifications often means that employers are unable to recruit the individuals they need, or individuals with the skills and experience valued by society.

Freedom of movement in contrast has provided a low cost, flexible route to employment for individuals with skills and experience in sectors across all parts of Scotland.

The UK Government has been clear that it is committed to ending free movement of people once the UK has left the EU. Employers across Scotland have consistently expressed concern that any restriction on free movement of EU labour could negatively affect their businesses especially if it were to involve new administrative or bureaucratic requirements that would impose financial or other costs.

For many small and medium-sized enterprises in particular, applying the same restrictive rules on migration to EEA migrants risks removing another valuable source of labour from smaller businesses and adding significant cost and bureaucracy to recruitment. These challenges would also face public services.

The clear consensus from stakeholders was that the initial proposal for a £30,000 salary threshold in the skilled worker route does not work for the majority of sectors including health, social care, hospitality and food and drink.

The independent Expert Advisory Group on Migration and Population, in their February 2019 report, analysed differences in income across Scotland. Their analysis shows that 63% of employees in Scotland (both UK and non-UK nationals) earn less than £30,000 and a salary threshold at that level would dramatically constrain Scottish employers’ access to skills and the workers they need to deliver and grow.

The overall reduction in EU migration would be especially challenging for those sectors most reliant on lower-paid, non-UK workers, including occupations such as textiles, social care, leisure and travel, sales and elementary occupations. Many of these sectors would be unable to adjust by increased investment in skills or capital. Employers in rural and island communities would be significantly affected by a high salary threshold. Placing further restrictions on migration to Scotland is likely to harm the rural economy.

As well as engaging directly with the Scottish Government, business leaders in Scotland made their position clear in their response to the UK Government white paper.

“The proposals outlined in the white paper don’t meet Scotland’s needs or the needs of the UK as a whole, and would be a sucker punch for many firms right across the country.”

“The UK government’s obstinate approach to immigration is a clear threat to many of Scotland’s businesses and local communities. These proposals will make it nigh impossible for the vast majority of Scottish firms to access any non-UK labour and the skills they need to grow and sustain their operations.”

“[There] is no doubt the government’s plans will exacerbate the existing recruitment crisis considerably, placing our tourism industry and what is one of the most important economic drivers for Scotland in severe jeopardy.”

“It is becoming clear to NFU Scotland there is misleading and damaging rhetoric coming from UK government and its advisors on where the gaps in skills and labour are. It is very concerning to us, and other stakeholders in the wider food and drink processing industry, that the strong evidence of our sectors has not been heeded.” 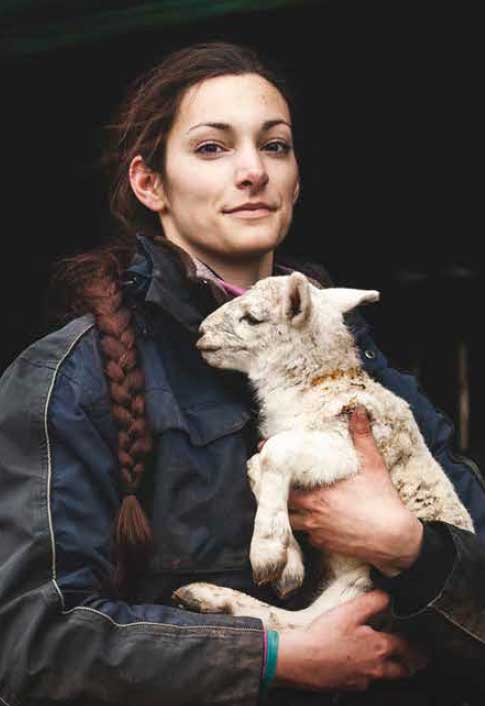