Cutting the main rates of UC and WTC by £20 week and reinstating the MIF would reduce spending on UC and Tax Credits in Scotland by an estimated £476 million in 2021/22, compared to if the emergency measures were retained. As shown in Table 2, UC makes up most of this reduction, with a smaller proportion coming from Tax Credits.

This reduction in expenditure is not spread equally across the population. Figures 2 and 3 show the impacts of reversing the £20 uplift and reinstating the MIF on households across the income distribution. Figure 2 includes all households, including those that do not lose out from the cuts. This gives an indication of how the impacts are spread across the whole population, since it takes into account the prevalence of losses as well as the magnitude. Figure 3 on the other hand only includes households which are affected by the cuts. This gives an indication of the average loss experienced by those households which do lose out.

The figures show that people in lower-income households – which are more likely to receive benefits and for which benefits make up a larger proportion of household income – would lose the most on average. For example, people in the poorest 10% of all households (i.e. Decile 1) would lose 6% of their average income, while people in the poorest 10% who are affected by the cuts would lose 15% of their average income. These figures should be treated with caution, however, as the data on households which report very low incomes may not always be reliable.[1] 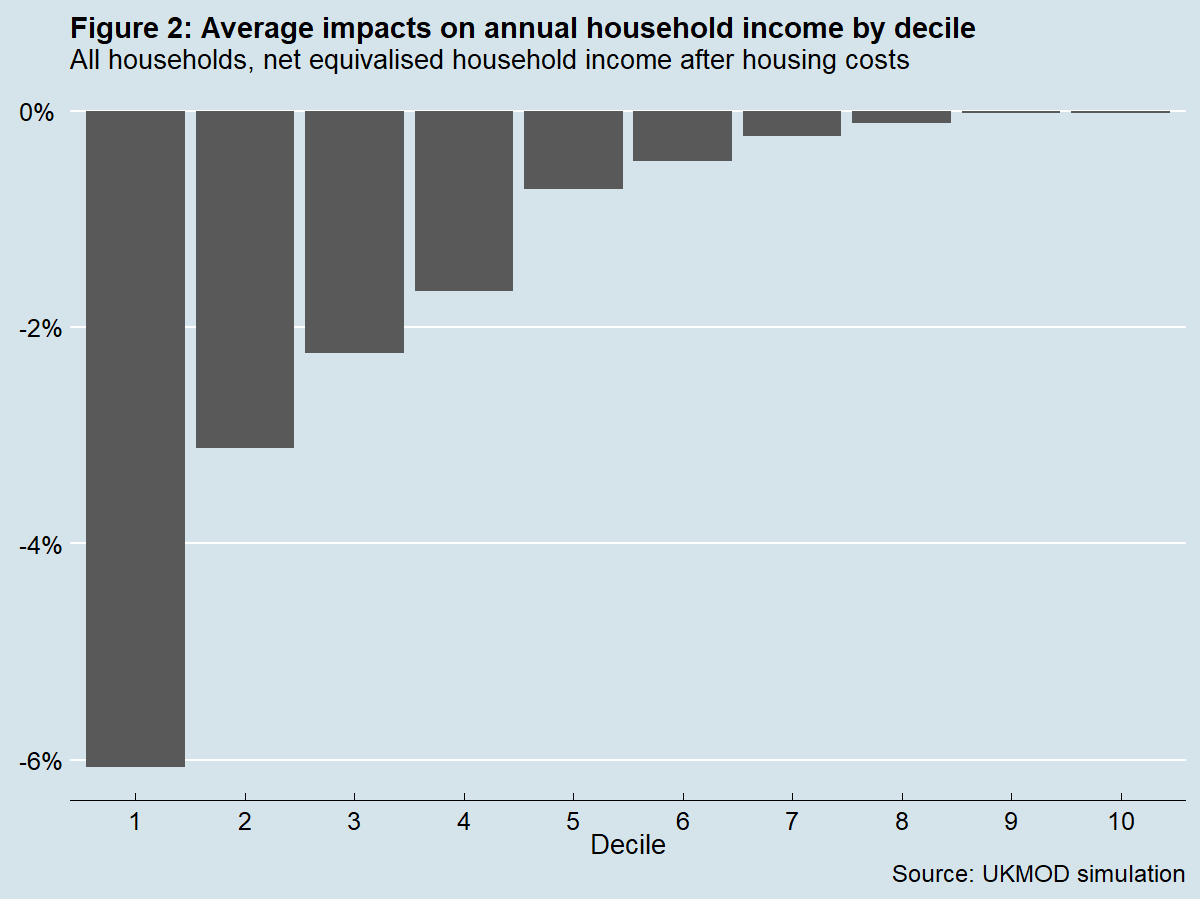 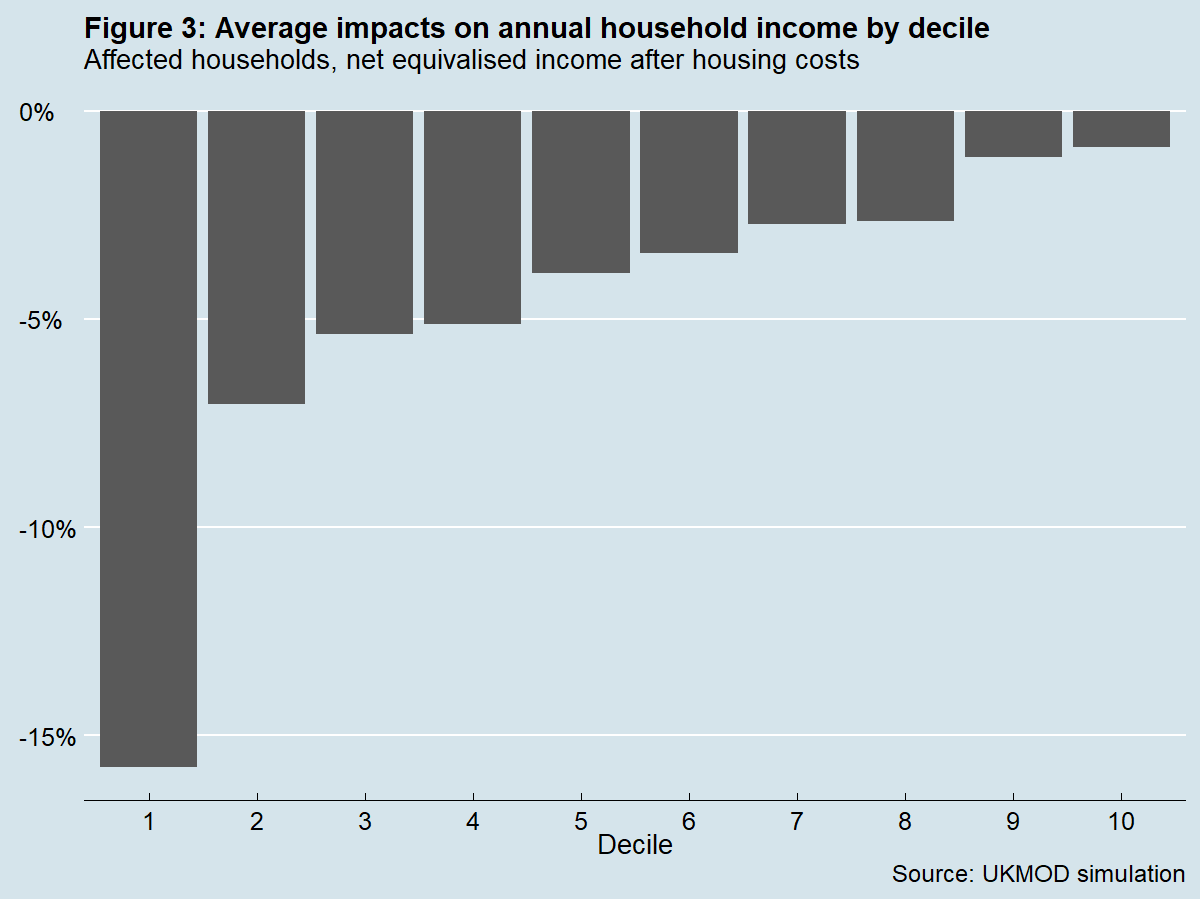 Figures 4 and 5 show the average impacts of withdrawing the emergency measures on different family types. The charts show that lone parents, who are mainly women, would experience the largest losses on average across the population. This reflects the fact that lone parents are particularly reliant on the benefit system, not least due to the range of obstacles they face in the labour market.

However, among those affected, average losses are slightly higher among single people without children. This could reflect the fact that these individuals have lower benefit entitlements, meaning the £20 uplift represents a larger proportion of their benefit income. Annex C presents a worked example of how a single person without children could be disproportionately affected by the removal of the uplift relative to a couple with children. 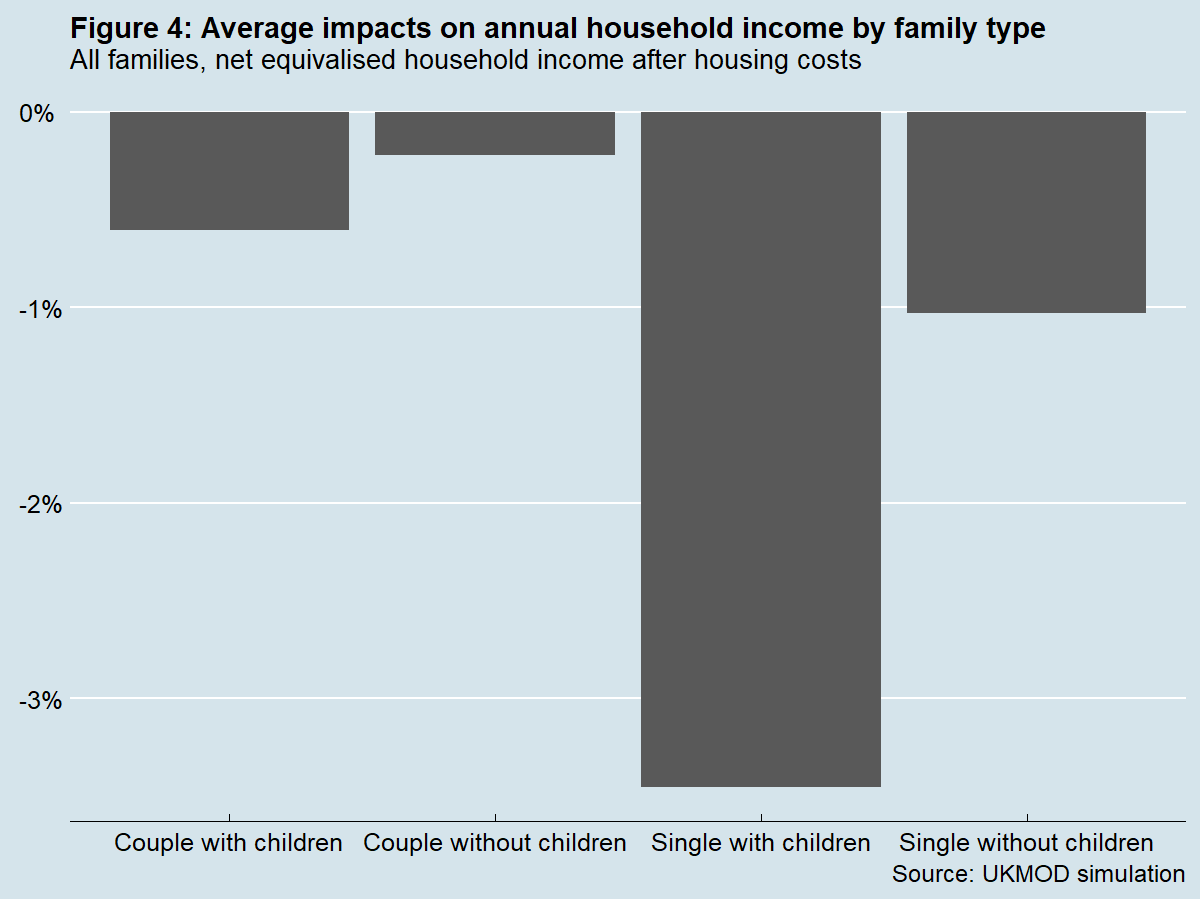 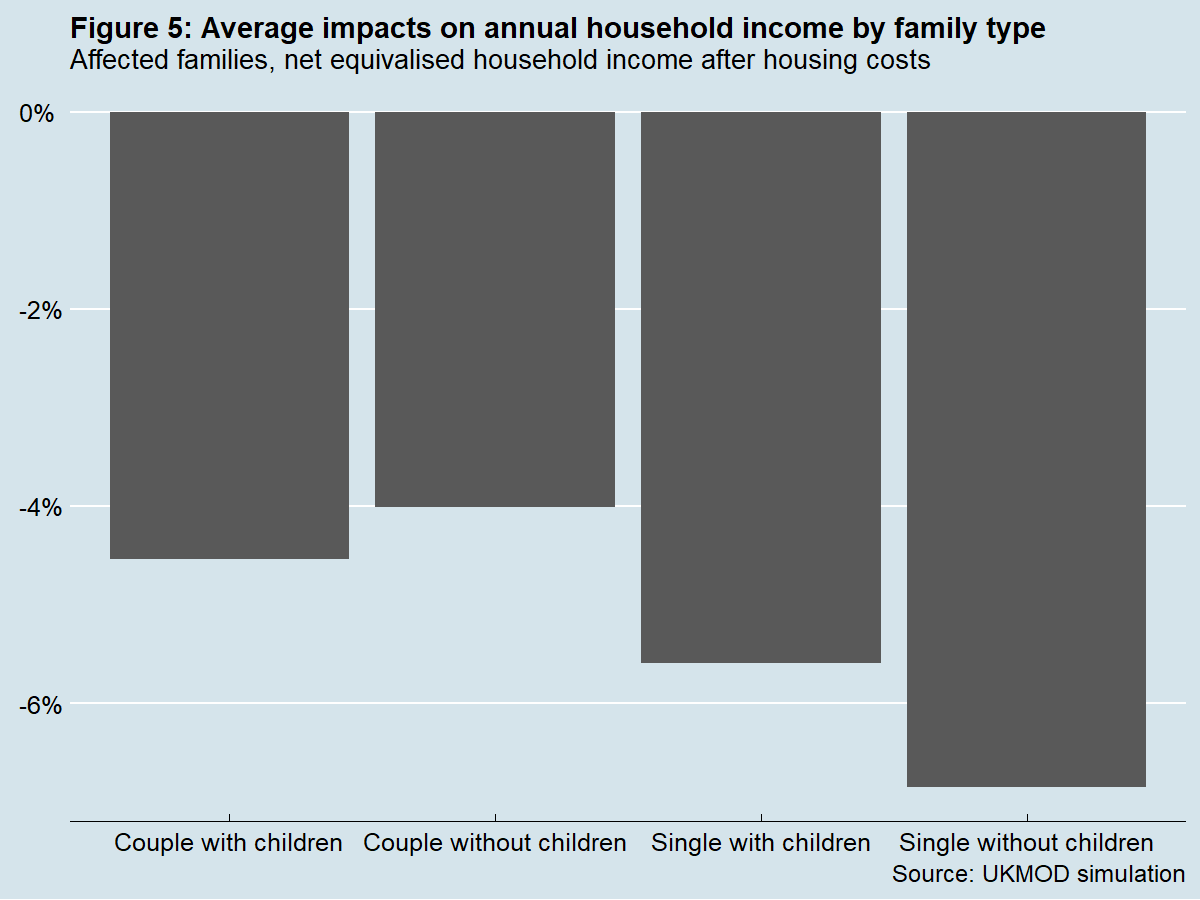 Figures 6 and 7 show the average impacts on families (i.e. benefit units) with and without children. Across the whole population, families with children would be disproportionately affected, reflecting the particular importance of social security for these families. The difference is within half a percentage point, but would be even greater without the benefit cap, which has prevented many families with children, especially lone parents, from receiving the uplift in the first place.

On the other hand, among those affected, average losses are slightly higher for those without children. Again, this could reflect the fact that the £20 uplift represented a larger percentage increase for those with lower benefit entitlements. 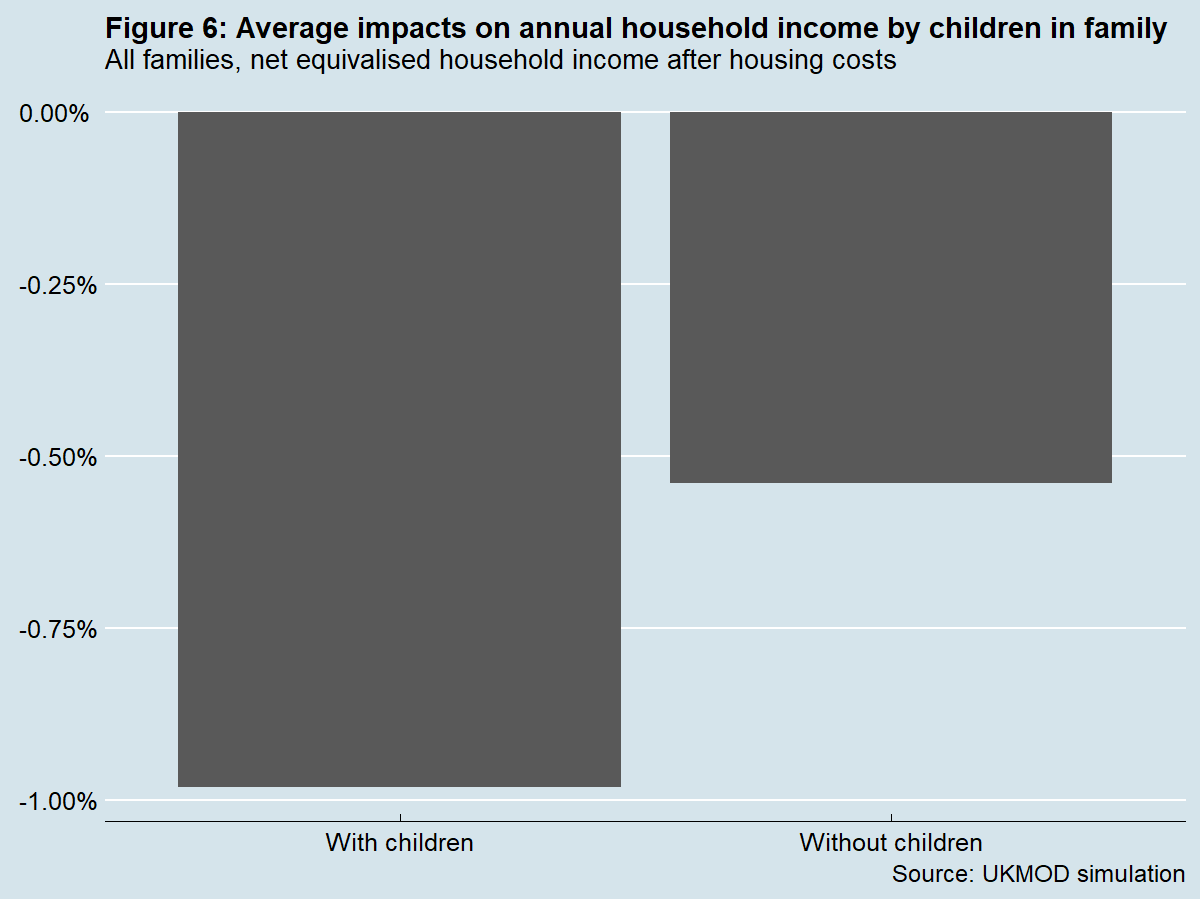 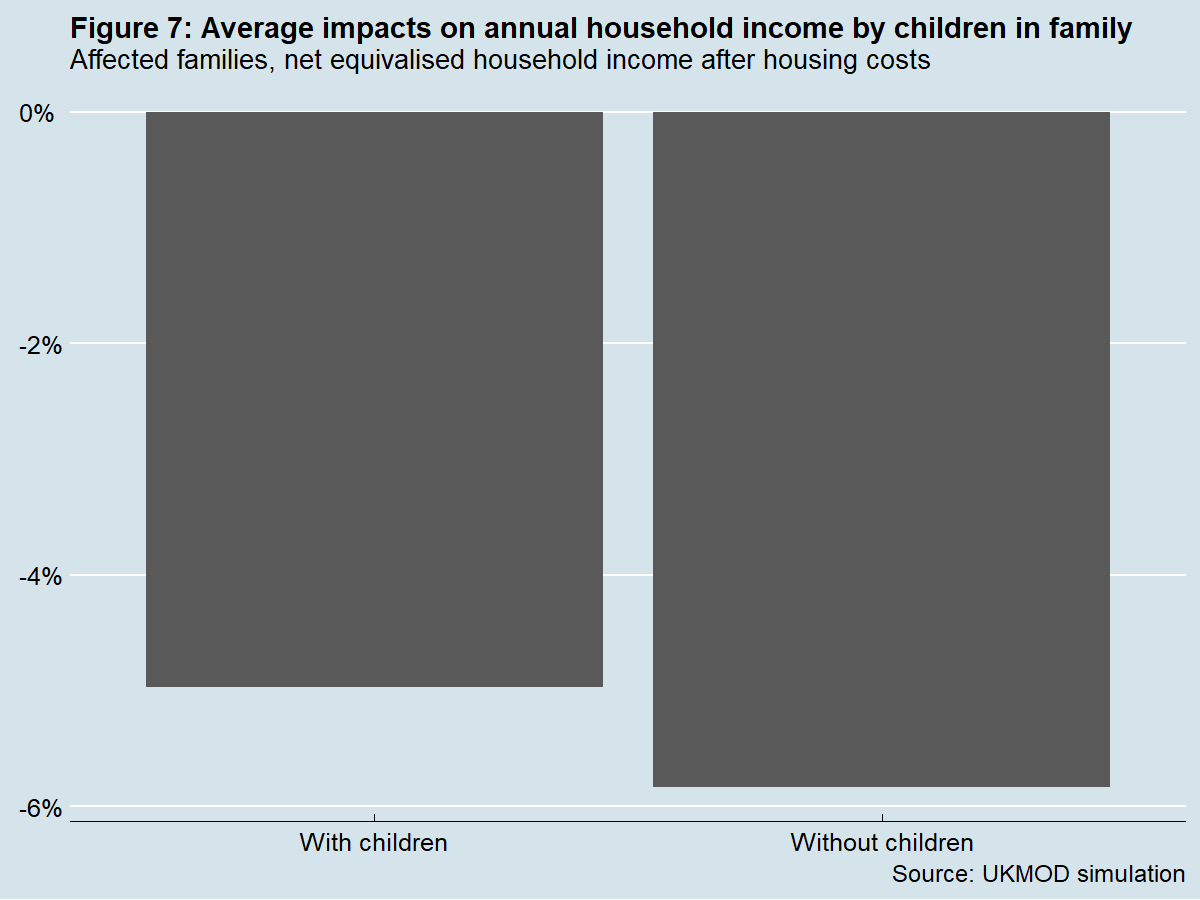 Finally, Figures 8 and 9 show the impacts on families by employment status. We distinguish between families in employment and those in self-employment based on which form of employment represents their largest source of earnings, and categorise families as not in employment if they have no earnings.

Across the population and among those affected, families with nobody in employment would be hardest hit, followed by families which derive most of the earnings from self-employment. This reflects the overall wage distribution, as families with no earnings tend to have the lowest incomes, as well as the elevated levels of unemployment expected next year. The relatively high impacts on families in self-employment also reflects the reinstatement of the MIF, which only affects self-employed workers with low earnings. Indeed, these workers would face a double blow: not only would their maximum UC amount be cut due to the removal of the £20 uplift, but more of that amount would be reduced due to the reinstatement of the MIF. Many self-employed workers would therefore see their annual incomes fall by over £1,000 if the UK Government goes ahead with its plans. This is in addition to the planned termination of the Self-Employment Income Support Scheme, which supported 137,000 Scottish workers in the last round of grants.[3] 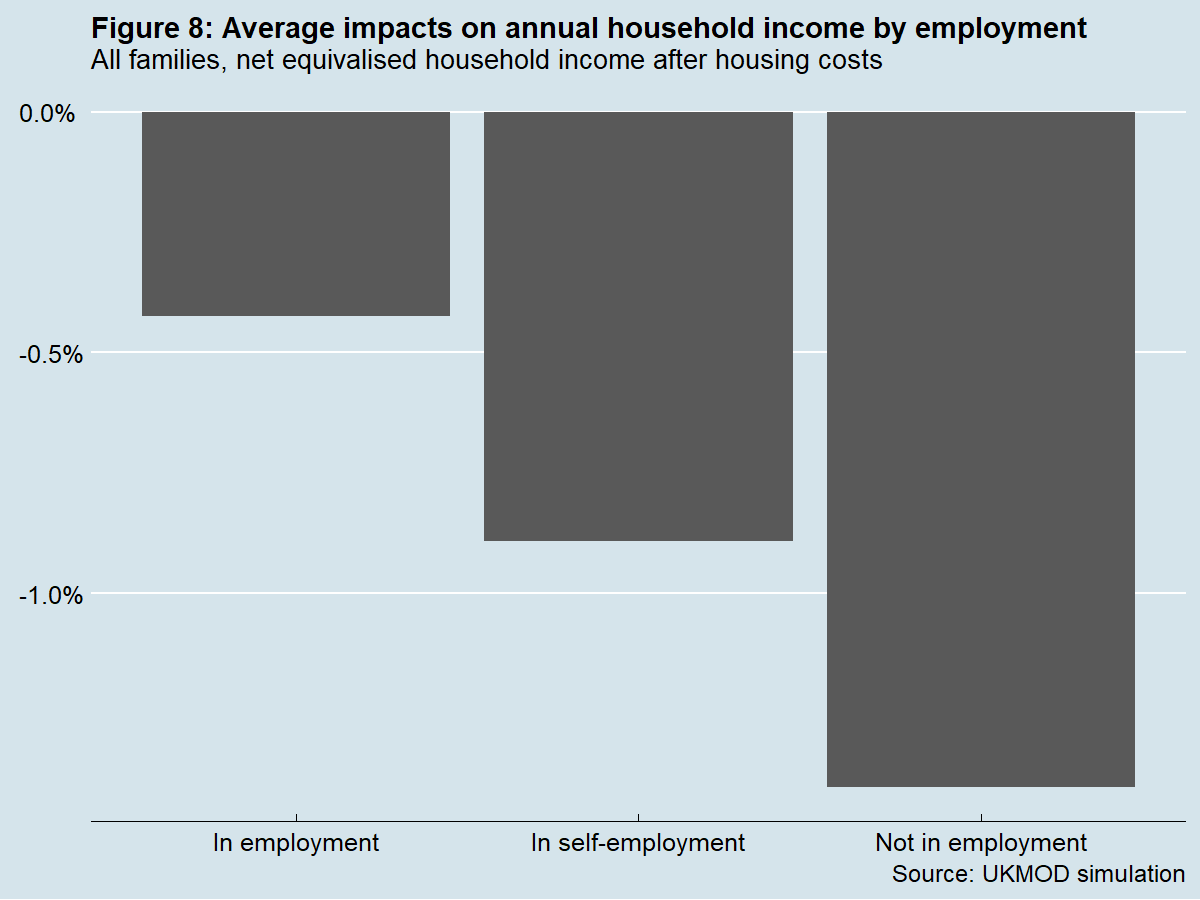 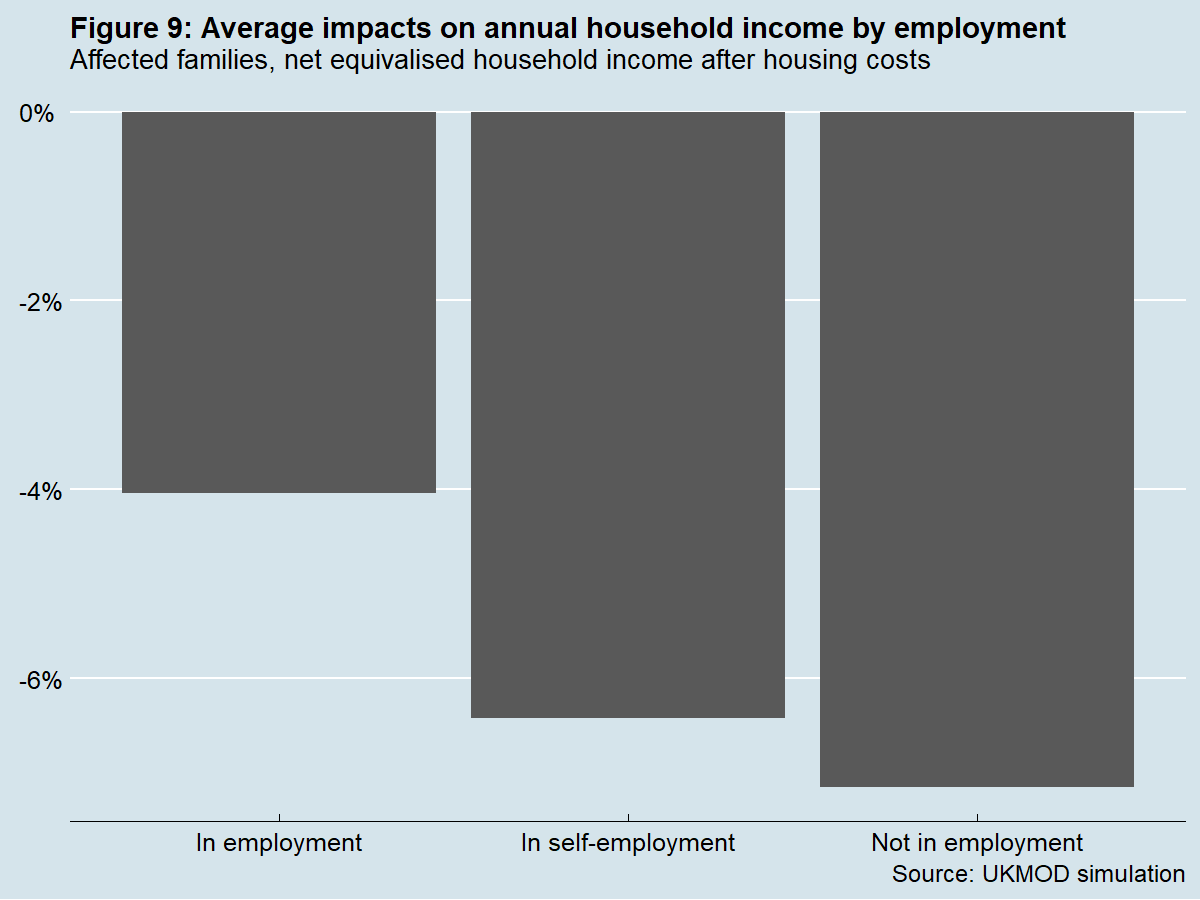 The combined effect of withdrawing the emergency measures is to increase poverty. Table 3 shows that the cuts are estimated to push 60,000 more people into relative poverty after housing costs, including 20,000 children, compared to if they were maintained. This would increase the poverty rate and the child poverty rate by 2 percentage points. Note that this analysis isolates the effect of the benefit measures and does not project the actual poverty rate in 2021/22, which will be influenced by a wide range of factors.

[2] Calculations are based on a fixed poverty line set at the Scotland level. In reality the poverty line is set at the UK level and will shift with median income, but the level of uncertainty involved in incorporating these factors in 2021/22 is likely to outweigh any gains in precision.