The analysis in this report uses UKMOD, an open-access microsimulation model developed by Institute for Social and Economic Research (ISER) at the University of Essex. The model applies tax and benefit rules to a set of individual- and household-level data, allowing the user to simulate and compare alternative scenarios. In this report, we simulate two scenarios for 2021/22: one in which the MIF remains suspended and the £20 uplift is retained, uprated using CPI forecasts from OBR’s July Fiscal Sustainability report; and one in which the MIF is reinstated and the uplift is removed, with the pre-Covid rates also uprated by CPI.[1] The associated increase in the Housing Benefit earnings disregard is also retained in the first scenario and removed in the second scenario.

The input data in UKMOD is derived from DWP’s Family Resources Survey (FRS). The analysis in this report uses the latest three years of FRS data, namely 2016/17, 2017/18, and 2018/19. To pool the data, the grossing weights used to scale the FRS sample to the whole population are divided by the number of data years, in this case three. The model uprates income components and other monetary variables from each year of data to the year of analysis using a range of sources, including historical data and forecasts, but no adjustments are made for demographic change. A full list of uprating indices, along with further information on the model, can be found in the UKMOD Country Report.[2]

UKMOD models the transition to Universal Credit by setting a target for the proportion of all claimants projected by the OBR to be on UC in each year of analysis and randomly selecting individuals to transition based on this target.[3] In 2021/22, this is 66%. For those individuals who meet the eligibility criteria for both legacy benefits and UC, published take-up rates are used for the legacy benefits in question. For individuals who are only eligible for UC, the take-up rate for Income Support for people without children (87%) is used. Again, take-up is based on random selection. We assume that this take-up behaviour remains constant, i.e. it is not affected by the increase in unemployment or the increase in benefit rates. However, we impose an additional condition that households containing an individual who is made unemployed as a result of the unemployment adjustment are only able to receive UC, not legacy benefits. Similarly, we ensure that anyone who becomes eligible for tax credits as a result of the £20 uplift is only able to receive UC, since in reality most of these individuals would not be able to apply for tax credits. This means that the tax-credit caseload is held constant between the two scenarios.

To account for the change in unemployment between the years of data collection and the year of analysis, we compare the outturn Labour Force Survey (LFS) unemployment rate in each year of data with the average unemployment rate in 2021/22 as projected in recent scenario modelling by the Scottish Government. Based on the difference between these two rates, we calculate the implied percentage change in the number of people employed/self-employed and apply this percentage change to the employed/self-employed sample in the FRS using random selection. We do not calibrate the actual number of people unemployed and do not take into account changes in labour force participation. Nor do we control for characteristics such as age, industry, or earnings level. The evidence suggests that these and other factors have influenced the probability of becoming unemployed in the context of Covid-19, but at the time of writing no precise estimates are available which relate to the time period of our analysis. Finally, we assume Coronavirus Job Retention Scheme (CJRS) and the Self-Employment Income Support Schemes (SEISS) end in April 2021 as planned and therefore do not model these in 2021/22.

The unemployment projections on which the analysis is based are modelled as a range, with a central scenario surrounded by lower and upper bounds to reflect the uncertainty involved in the estimates. In this report, we use the central scenario for 2021/22, but any differences in our results are marginal if we use the upper or lower bound instead. As an example, Figures 2a, 2b, and 2c respectively compare the results in Figure 2 if the central scenario, lower bound, and upper bound are used to model unemployment. 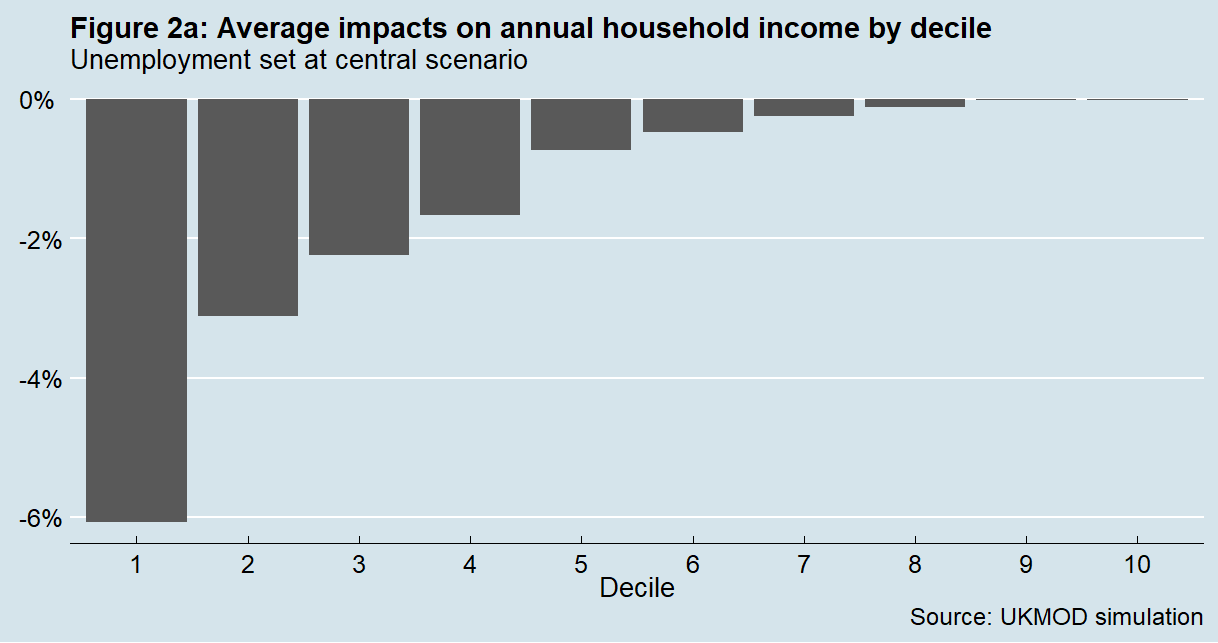 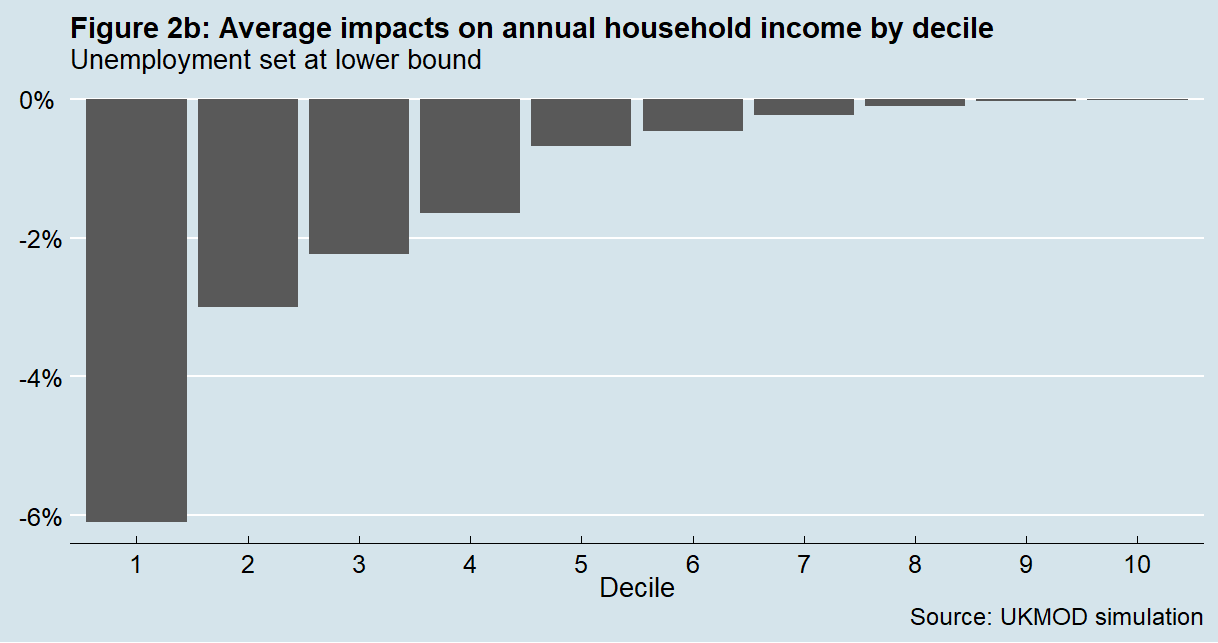 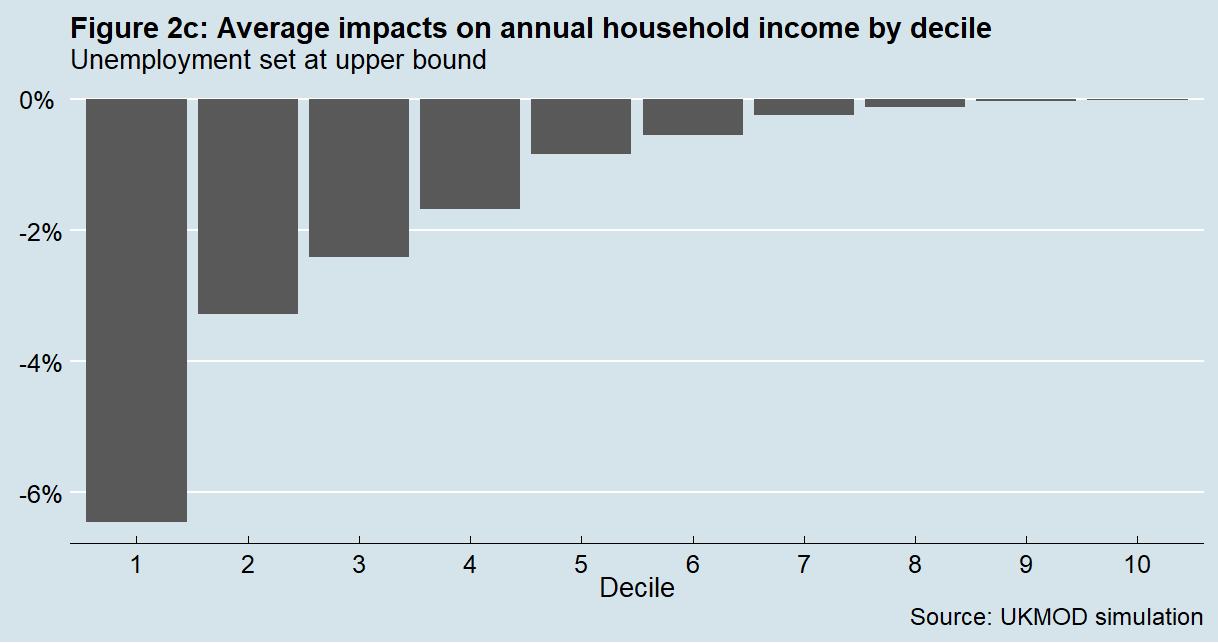