Standard allowances are used to calculate UC payments for all claimants before specific elements are added for children, disability, and housing.  They vary by the claimant’s age and whether the claimant is single or in a couple. The WTC basic element is similar, except that it is a flat rate applied to all claimants, with additional elements reflecting family type, and is set as a yearly rather than monthly rate.

In March 2020, UC standard allowances and the WTC basic element were both increased by £20 per week - around £1,000 per year - compared with the previously announced rates for 2020/21.[1] These increases are shown in Table 1, with monthly UC rates converted from monthly into annual terms and rounded to the nearest pound. The table also shows what the rates would be in 2021/22 with and without the uplift, in both cases uprated using CPI forecasts from the OBR.[2]

Table 1: Annual benefit amounts before and after £20/week uplift, £s

The MIF represents a lower bound on the level of earnings used to calculate UC payments for self-employed workers who have received UC for at least a year.[3] It is determined by applying the relevant minimum wage rate to the number of hours which the claimant is expected to work. If a self-employed claimant reports earnings below the MIF, the MIF is used to calculate their UC payment rather than their reported earnings. Since UC payments decrease with earnings, this effectively reduces their payment. Annex B contains a worked example of how the suspension of the MIF could have helped support a self-employed worker whose earnings have fallen due to Covid-19.

The withdrawal of these measures, particularly the £20 uplift, will impact the majority of people on UC and WTC. Figure 1 shows that the number of people on UC had already surpassed 473,000 in October 2020, an increase of 93% since January when the caseload stood at 244,000. In addition, although the WTC caseload has been steadily falling since UC was first introduced in 2013, an estimated 83,400 families in Scotland still received WTC in April 2020.[4] 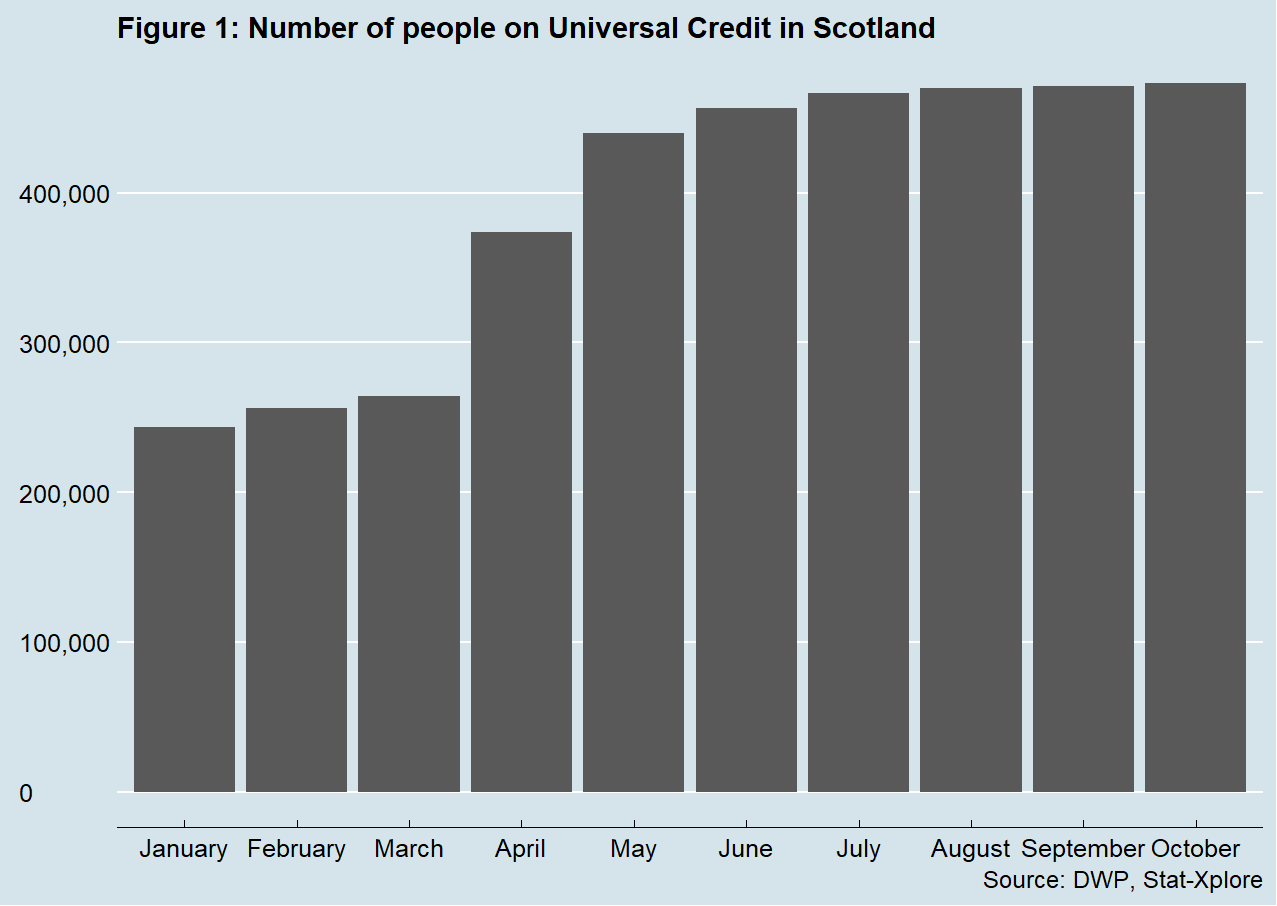 Although the withdrawal of emergency measures would affect most people on UC and WTC, the main exception would be families subject to the benefit cap. Since the benefit cap was not increased to reflect the uplift in benefit rates and other emergency measures, these families did not receive the full increase in the first place. Indeed, if they were already subject to the cap before the uplift, their benefit payments would not have increased at all. In May 2020, the benefit cap was already affecting over 6,000 families in Scotland, up from around 3,500 in January. Ninety-seven percent of these were families with children, the majority lone parents.[5]

Despite these historic increases in the benefit caseload, it is plausible that the full impacts of Covid-19 on the labour market have yet to be felt. The Job Retention Scheme has played an important role in curbing unemployment since it was introduced in March, with nearly a quarter of a million workers furloughed in Scotland as of 31 August.[6] However, the scheme is currently scheduled to finish in April 2021, at which point the benefit caseload could be expected to rise further.

[1] Earnings disregards in Housing Benefit and Council Tax Reduction were also increased by £20 per week to ensure that the uplift was not offset by reductions in these benefits.

[3] In order to allow a claimant to grow their business, the MIF is not applied for the first year of a claim (the ‘start-up period’).