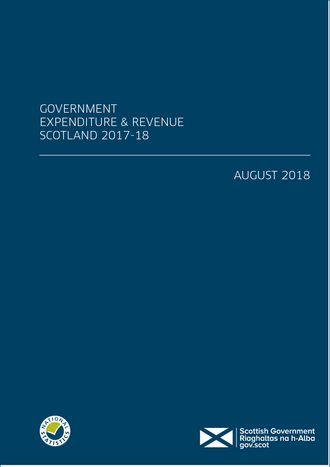 This section presents revisions from the previous GERS 2016-17 publication.

There are a number of revisions to UK revenue totals from GERS 2016-17. Some of these do not affect estimates of Scottish revenue. UK interest and dividends has been revised as the ONS has taken on new data for English housing associations, and UK non-domestic rates have been revised following a review of the recording of rates in England.

Table B.1: Revision to Estimates of Total Non-North Sea Revenue

The majority of changes to Scottish revenue reflect updated apportionment data. These relate to income tax, national insurance contributions, and VAT. The new Scottish Government powers around tax following Scotland Act 2016 has led to new data sources and more timely information becoming available for income tax and VAT. The impact of these on the forecast is discussed in more detail in the GERS revenue methodology note. [23]

Table B.2: Revision to Estimates of Public Sector Revenue: Scotland and UK 2016-17

Table B.3 summarises the revisions to North Sea revenues in this edition of GERS by comparing the estimates contained in this report with last year’s publication. Estimates are largely unrevised, although there is an upward revision in 2016-17.

A discussion of revisions to all taxes between 2013-14 and 2016-17 is provided in the GERS 2017-18 Revenue Methodology note available on the GERS website.

Revisions to Expenditure Estimates from GERS 2016-17

The table below shows the revisions to spend in 2016-17 by function, and by Scottish Government, Scottish local government, Scottish public corporations, and Other UK government bodies. Overall, Scottish spend in 2016-17 has been revised up by £145 million. This is primarily driven by revised estimates of Scottish housing associations’ capital spending, which increases spend by £118 million. Increases in other UK government department spending, resulting from the incorporation of data from the 2016-17 Country and Regional Analysis publication, are offset by decreases in Scottish Government and Local Government spending, resulting from the move from provisional to final outturn data.

The main increase in other UK government department spending relates to transport, which reflects continuing improvements to estimates of Network Rail spending for Scotland, following its reclassification into the government sector.

Table B.5: Revisions to Estimates of Public Sector Expenditure: Scotland and UK 2016-17

Revisions to Estimates of Capital Consumption from GERS 2016-17

Table B.6 sets out the changes to estimates of capital consumption in Scotland and the UK between this report and GERS 2016-17. Capital consumption, which represents the capital stock consumed to provide services within the year, is included alongside current expenditure when calculating the current budget balance. It does not affect the estimate of the net fiscal balance.

In general, capital consumption in all years has been revised up, reflecting the incorporation of the latest ONS Regional Accounts data.

Revisions to Fiscal Aggregates from GERS 2016-17

Table B.7 shows revisions to the current budget balance from the previous publication of GERS. The UK current budget balances has improved in all years, whilst the Scottish current budget balance excluding the North Sea has worsened slightly in 2013-14 and 2015‑16, and by larger amounts in 2015-16 and 2016-17. This reflects a number of factors. Firstly, it reflects the fact that much of the improvement in the UK position is due to revised figures for English non-domestic rates, which has not affected the Scottish estimate. Secondly, it reflects the downward revisions to income tax, national insurance contributions, and VAT for Scotland in 2015-16 and 2016-17.

Table B.8 shows revisions to the net fiscal balance from the previous publication of GERS. The revisions pattern is quite similar to that for the current budget balance.

The main source of the revisions to GDP is the development of the Balanced Approach to regional GVA by ONS, [24] and the new information that these statistics have introduced to the annual Supply and Use tables. In addition, GDP growth since 2015 has also been revised due to changes to the measurement of construction activity in Scotland.

Table B.9: Impact of Revisions to GDP on Estimates of the Current Budget Balance

Table B.10: Impact of Revisions to GDP on Estimates of the Net Fiscal Balance