Since 2002, the Scottish Executive has collected information on the number of residents aged 65+ supported by local authorities in care homes. These residents may be mainly funded by their local authority or may be a self-funder receiving the appropriate weekly payment towards their care homes fees. All of these residents receive personal care services for free. 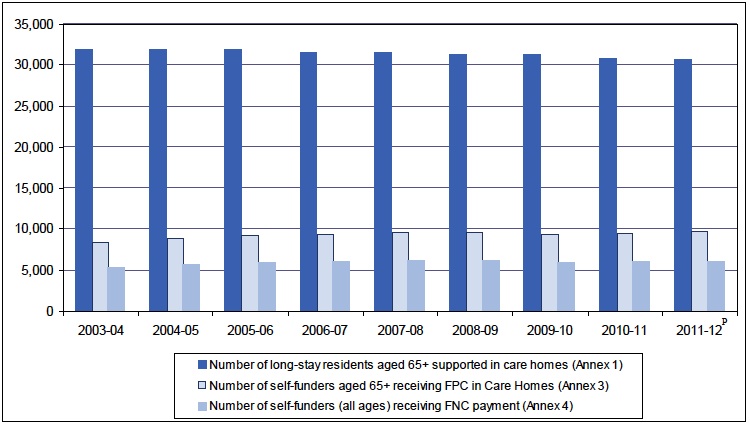 Table 1 shows that the average number of long-stay residents aged 65+ in care homes in Scotland reduced slightly since the introduction of free personal and nursing care. In 2003-04 there were nearly 31,900 older people in care homes reducing to around 30,800 in 2010-11. The provisional figures for 2011-12 suggest that this trend is continuing as the number of long-stay residents aged 65+ has reduced further.

A possible reason for the decreases shown in 2009-10 is the introduction of the National Eligibility Criteria and Waiting Times for the Personal and Nursing Care of Older People[1] during 2009-10.

Prior to 1 July 2002, people aged 65 and over could be charged for personal care services provided in their own home. They can however be charged for domestic services such as help with shopping or housework but any charge would be subject to a financial assessment.

Over the last eight years there has been a shift away from care homes towards more care being provided in peoples own homes. At the same time there has been an increase in the proportion of clients receiving personal care services. In 2003-04, 57 per cent of clients received personal care services. This has increased to 90 per cent in 2010-11. This increase is linked to the following National indicators:

The Scottish Executive publishes home care statistics annually. The latest figures, for 2011, are available from: http://www.scotland.gov.uk/Topics/Statistics/Browse/Health/Publications