The earliest records of lobster fishing in Scotland date back to the 12th century when lobster was caught by hand using 'crooks' and hoop nets. With the introduction of baited traps (creels), exploitation on a more commercial basis developed, and today there are important creel fisheries for the European lobster in many areas around the Scottish coast. Landings by UK vessels have increased substantially in recent years, from 290 tonnes in 2001 to about 1,000 tonnes, with a value of over £10.6 million, in 2013. In recent years, the majority of lobster landings have come from the South East, East Coast, Orkney, Hebrides, and South Minch assessment units.

The European lobster is found all around the coast of Scotland, typically on hard ground in relatively shallow waters and on the fringes of kelp beds. The diet of the adults consists mainly of benthic invertebrates such as crabs, molluscs, sea urchins, polychaete worms and starfish, but may also include fish and plants. The majority of lobsters are caught in waters shallower than 30 m but they may be found as deep as 150 m. Substrate and suitable shelter are thought to affect the size and population density, with larger lobsters being found on more exposed grounds. Lobsters are not known to undertake extensive migrations and will only move a few miles along the shore. Despite this, a recent study on the genetic variation of lobsters reported very low levels of genetic variation amongst lobster populations in Europe.

The growth rate of lobster is highly variable. Individuals recruiting into the fishery at the minimum landing size of 87 mm carapace length ( CL) can be anywhere between 4 and 12 years old. In common with other crustaceans, lobster shed their shell (moult) in order to grow. The main moulting period is in June-July. Juveniles moult more frequently and grow faster than older animals. Mating occurs just after moulting while the female's shell is still soft. Size at maturity in females varies across Scotland; for example, females mature at smaller sizes in the South East than in the Hebrides.

Female lobsters produce between 10 and 15 thousand eggs. Once fertilised the eggs develop internally for up to a year after which they are carried under the 'tail' for nine to 11 months until they hatch. 'Berried' female lobsters have much reduced feeding and growth rates and low catchability during the egg bearing phase. Lobsters can live to a very old age and the potential reproductive life span of a female lobster is in excess of 40 years. Amongst the largest reported lobsters in the UK are a female of 157 mm CL, thought to be about 72 years old, and an 11 lb (5 kg) lobster from the Hebrides, estimated 190 mm CL. 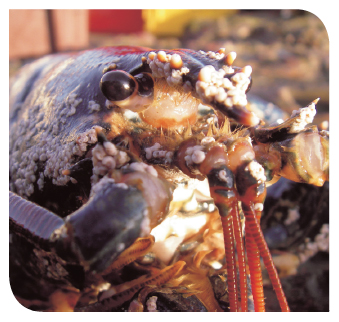 The lobster fishery is not subject to EU TAC regulations or national quotas. In Scotland, vessels landing lobsters are required to have a licence with a shellfish entitlement. Vessels without this entitlement are only allowed to land five lobsters per day. The main regulatory mechanism is a minimum landing size of 87 mm CL in all areas except Shetland (90 mm CL, under the Shetland Regulating Order). There is a maximum landing size of 155 mm CL for females. 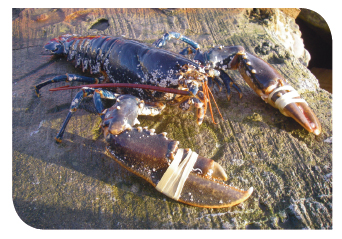 Age determination is generally not possible for animals that moult, and application of age- structured assessment methods to crustacean stocks is problematic. Length Cohort Analysis ( LCA) is the method used for assessing lobster stocks. It uses official landings and length frequency data collected as part of the Marine Scotland Science market sampling programme [ 1]. LCA results are presented in terms of yield-per-recruit and biomass-per-recruit, providing estimates of fishing mortality ( F) and a framework for evaluation of management measures. Assuming a direct relationship between fishing mortality and effort, generally, lower levels of fishing effort will result in an increase in stock size and a reduction in landings. A higher level of fishing effort will reduce total stock biomass but landings may also fall, as animals are caught before they have had time to grow to a size that would contribute much weight to the yield (growth overfishing). In between these lies F MAX, the fishing mortality rate that maximizes yield per recruit. It is not possible to directly estimate the maximum sustainable yield ( MSY) for these stocks, hence F MAX is used as a proxy for F MSY [ 2]. The changes that the LCA predicts are long term (equilibrium). The method does not provide any indication of short-term stock dynamics or recruitment over-fishing. Assessments are performed on a regional basis for males and females separately.

Results of assessments based on LCAs for the period 2009-2012 for eight of the twelve assessment units, summarising estimates of fishing mortality in relation to the F MSY proxy are shown below. There were insufficient sampling data from the Mallaig, North Coast, Sule and Ullapool areas to conduct LCAs. Lobsters in all the assessed areas were fished above the F MSY proxy to some extent, particularly males. Fishing mortality was estimated to be above F MSY for both males and females in Clyde, South Minch, East Coast and South East. In the Hebrides, Orkney and Papa, fishing mortality for females was at F MSY or below while males were fished above F MSY. In Shetland, males were fished below F MSY and females above F MSY.

Overall, assessments for the period 2009-2012 show that most lobster assessment units in Scotland were fished close to or above the F MSY proxy. A higher yield and biomass per recruit in the long term could potentially be obtained in all assessment units by reducing the level of fishing mortality (effort).