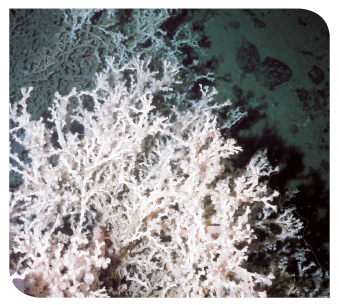 Although 90% of global marine habitat is 'deepwater' (deeper than 500 m), we still know relatively little about life down there. To the northwest of Scotland lies a remarkable deepwater ecosystem. It was not until near the end of the 20th century that dwindling inshore fish stocks and advances in fishing technology made it profitable to target the deeper waters. French and German trawlers were the first to exploit species such as orange roughy and blue ling. Interest and effort increased, but there were signs early on that some deepwater species could not withstand heavy exploitation and were on the verge of collapse. Consequently TACs were introduced in 2003. This forced a number of UK vessels out of the fishery, leaving only a few to prosecute the deepwater. Thus the deepwater's economic significance to the UK fishing industry as a whole was much reduced. The ICES scientific consensus is that many of the deepwater fish stocks have declined and are now outside safe biological limits. Since the introduction of the management plan, TACs and effort generally decreased. Recently, data from Marine Scotland's deepwater surveys suggests that over the past decade stocks of some species, such as the grenadiers, have stabilised. Although this suggests that stock declines may have been halted, there is no sign yet of recovery.

This deepwater area contains some of the most extensive and diverse coldwater coral reef ecosystems in the North Atlantic. There is little doubt that bottom contact fishing operations cause long-lasting damage to such habitats and that they need conservation measures. Marine Scotland is therefore involved in a programme to catalogue, monitor and research Scotland's deepwater ecosystem as well as its fish stocks.

The deepwater to the west of Scotland is divided by a massive underwater feature south of the Faroes - the Wyville-Thomson Ridge - which runs southeast to northwest. The area north of this ridge, known as the Faroe-Shetland Channel, is dominated at 500-600m by cold Arctic waters where temperatures can be below 0°C. Relatively few species are able to survive there. South of the ridge is the area known as the Rockall Trough. The water there comes from the Atlantic, and is considerably warmer than that found north of the ridge. Consequently there is a much greater diversity of life, and it is there that the major deepwater fisheries take place. The continental shelf slope descends steeply into the Rockall Trough and runs approximately north-south, descending to around 1200 m in the north and to over 3000 m in the south of the trough. The flat plain of the trough is punctuated by the Anton Dohrn and Hebridean Terrace Seamounts and Rosemary bank. These massive extinct volcanoes rise over 1000 m from the seafloor and are characterised by steep sides, hard substrate, strong currents and enhanced biological productivity.

The shelf slope is home to a diverse assemblage of fish that differs markedly from that found on the adjacent shelf. Very little sunlight penetrates to 500 m and beyond 900 m it is perpetually dark. The temperature drops from around 9°C at 500 m to just 3°C at 1800 m. Species of commercial interest found on the upper slopes (500 m) include hake, torsk, ling, anglerfish, deepwater redfish and greater argentine. At 1000 m the residents include blue ling, roundnose grenadier, orange roughy, black- scabbard fish and a number of deepwater sharks, e.g. the leaf-scale gulper shark. The biomass of fish peaks at 1500 m but at depths beyond this there is little of commercial interest. A host of other weird and wonderful species such as chimaeras, smooth-heads, fang-tooth and cut-throat eels make up the rest of the catch. Well over 200 species have been recorded from the slope. 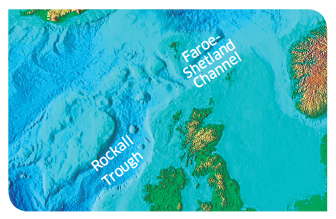 The ecosystem approach and multidisciplinary surveys

In the last few years deepwater research has become multidisciplinary, with the aim of bringing the data together under the framework of the ecosystem approach to marine management. In addition to trawl surveys, underwater TV surveys are undertaken to map the seabed and verify the presence of vulnerable habitats such as coral reefs. This research is now coming to fruition, and published results suggest that over the past 10 years, biodiversity of the deepwater slope fish community has not declined or changed significantly. This is encouraging for conservation and suggests current levels of fishing are not having major impacts on biodiversity. With the advent of a network of marine protected areas ( MPAs), this is especially pertinent as there are several deepwater sites, including the seamounts, that are being considered as MPAs.

Scottish interest in the deepwater fishery for 2015 and 2016

The latest (2013) official information for deepwater species landed into Scotland by UK vessels shows that total landings of roundnose grenadier, blue ling, black scabbardfish and Greenland halibut amounted to 408 tonnes at a value of approximately £854,456. Species like hake and ling which are also found in the shallower shelf waters, contributed 9,230 tonnes to the 2013 Scottish fishery at a value of nearly £19.9million. There were no landings of orange roughy by Scottish vessels in 2013.

For the 2014 and 2015 fishery, no quota has been set for either orange roughy or the deep-sea sharks in all ICES areas. Since 2007, directed fisheries for deep-sea sharks in the northeast Atlantic have not been permitted. Subsequent TACs have reflected the amount that was allowed to be landed as by-catch from the deepwater mixed fishery. For 2015, a zero TAC for deep-sea sharks has been set, with no quota for by-catch being available from the start of this year. For deep-sea stocks the TACs are set every two years. In December 2014, the Council of Ministers meeting in Brussels, decided the quotas for the next 2 years - 2015 and 2016. See table below.