The brown crab fishery is economically a very important fishery for Scotland with total landings in 2013 of around 10,800 tonnes and a value of £13.8 million. The fishery is long established and landings, although variable, have increased significantly over the last thirty years. Previously, most brown crab was caught inshore in mixed species creel fisheries. From the mid 1980s, technological advances allowed the fishery to expand to offshore areas to the west and north of Scotland, which nowadays account for over half of total landings. Landings from the six principal brown crab assessment units: the Hebrides, Sule, Papa, South Minch, East Coast and Orkney, made up 79 % of the total in 2013. The majority of crabs are landed in the third and fourth quarters of the year, and a large proportion are exported live to markets in southern Europe.

The brown crab is found all around the Scottish coast from the shallow sub-littoral into offshore waters to depths exceeding 100 m. It inhabits rocky reefs, mixed coarse grounds and soft sediments (muddy sand) particularly on the offshore grounds. Brown crabs eat mainly benthic invertebrates, particularly bivalves, small decapods and barnacles; although their capture in baited traps indicates that they will also scavenge for food. In common with other crustaceans, brown crab grow by casting (moulting) their shell and then hardening a new larger shell. Growth rate varies between areas, and animals will typically reach minimum landing size, (140 mm carapace width CW) at four to six years old. Small animals may moult several times in a year, but at larger sizes growth slows down and the inter-moult period can be as long as four years. Female brown crabs in Scottish waters typically mature between 130-150 mm CW. During courtship the mature female is guarded by a male. Mating takes place post moult while the shell is still soft. Females produce up to three million eggs. Fertilised eggs are carried under the female's 'tail' for up to nine months over the winter, until they hatch. The larvae are pelagic and drift with water movements until they settle to the seabed as miniature adults (about 2.5 mm in size) in summer or autumn depending on latitude and water temperature. Juvenile crabs are more commonly found in shallow inshore waters. Adult crabs, especially females, can undertake extensive seasonal migrations (100s km), behaviour thought to be associated with reproduction. Migration of adults and the dispersal of larvae will both influence the connectivity of stocks. The structure of brown crab populations around Scotland is poorly understood. 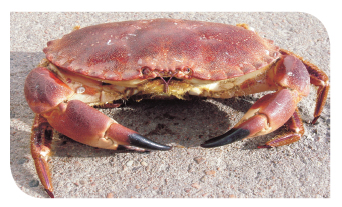 The brown crab fishery is not subject to EU TAC regulations or national quotas although there are EU measures in place to restrict the fishing effort (kW days) of all vessels > 15 m (including creel boats) in ICES Subarea VI. In Scotland, vessels landing brown crabs are required to hold a licence with a shellfish entitlement. Vessels without this entitlement are only allowed to land 25 crabs per day. The main regulatory mechanism is a minimum landing size of 140 mm CW to the north of 56°N and 130 mm CW to the south of 56°N (except for the Firth of Forth).

Age determination is generally not possible for animals that moult and, application of age- structured assessment methods to crustacean stocks is problematic. Length Cohort Analysis ( LCA) is the method used for assessing brown crab stocks. It uses official landings and length frequency data collected as part of the Marine Scotland Science market sampling programme [ 1]. LCA results are presented in terms of yield-per-recruit and biomass-per-recruit, providing estimates of fishing mortality ( F) and a framework for evaluation of management measures. Assuming a direct relationship between fishing mortality and effort, generally, lower levels of fishing effort will result in an increase in stock size and a reduction in landings. A higher level of fishing effort will reduce total stock biomass but landings may also fall, as animals are caught before they have had time to grow to a size that would contribute much weight to the yield (growth overfishing). In between these lies FMAX, the fishing mortality rate that maximizes yield per recruit. It is not possible to directly estimate the maximum sustainable yield ( MSY) for these stocks, hence FMAX is used as a proxy for FMSY [ 2]. The changes that the LCA predicts are long term (equilibrium). The method does not provide any indication of short-term stock dynamics or recruitment over-fishing. Assessments are performed on a regional basis for males and females separately. 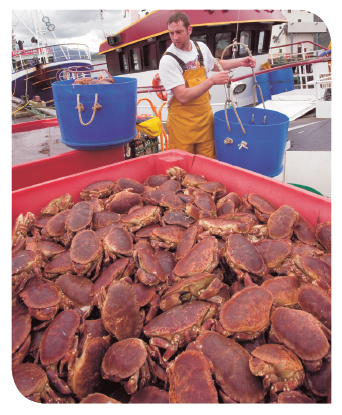 Results of assessments based on LCAs for the period 2009-2012 for nine of the twelve assessment units, summarising estimates of fishing mortality in relation to the FMSY proxy, are shown above. There were insufficient sampling data from the Mallaig, Ullapool and Clyde areas to conduct LCAs. Of the nine assessed areas, six were fished above the FMSY proxy to some extent. Fishing mortality was estimated to be above FMSY for both males and females in South Minch, Orkney, East Coast and South East. In Sule and Hebrides, fishing mortality for males was at FMSY or below while females were fished above FMSY. In the North Coast, Papa and Shetland, recent fishing mortality was approximately at FMSY or lower.

Overall, assessments for the period 2009-2012 showed that most brown crab assessment units in Scotland were fished close to or above the FMSY proxy. In many of the assessment units, a higher yield and biomass per recruit in the long term could potentially be obtained by reducing the level of fishing mortality (effort).