The velvet crab fishery in Scottish waters is a relatively recent development. Velvet crabs were once considered a 'pest' species, and only taken in a small scale fishery for a few months in the winter. With the collapse of the Spanish fishery in the early 1980s, the Scottish fishery expanded rapidly to supply southern European markets and became the largest velvet crab fishery in Europe. In 2013, the fishery landed 1,600 tonnes of velvet crab into Scotland with a value of £4 million. Velvet crabs are caught in the inshore creel fishery along with lobster and brown crab. Very few fishermen fish solely for 'velvets'. Previously the fishery was associated mainly with the west coast (Hebrides and South Minch assessment units) and Orkney, but since 2002 landings on the east coast of Scotland have increased substantially. It is not clear whether this is due to an increase in the velvet crab population in this area or to more specific targeting of the species. In 2013, the majority of landings came from Orkney, South Minch, Shetland, East Coast, South East and Hebrides. Most velvet crabs are landed between July and November.

The velvet crab is a member of the family P ortunidae (Swimming crabs) and is found in waters all around the British Isles. It is a fast moving and aggressive species, most commonly found on rocky substrates down to depths of about 25 m. Velvet crabs feed on both animal and algal material, with brown algae being the dominant item found in gut content analysis. Females grow grow more slowly, and to a smaller maximum size than males. These differences are likely are likely to be due to reduced growth during the females' egg bearing phase. Growth is highly seasonal, and males and females moult at different times of the year. The main moult for males is between April and July, whereas females moult between May and August. Mating occurs after females have moulted, when the shell is still soft. Studies carried out in Orkney and Shetland provide fecundity estimates of between 5,000 and 278,000 eggs per female. In contrast to brown crabs, there is no evidence that velvet crabs undertake extensive migrations. Their movements are thought to be restricted to a few hundred metres. 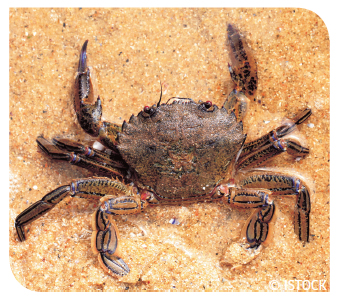 The velvet crab fishery is not subject to EU TAC regulations or national quotas. In Scotland, vessels landing velvet crabs are required to hold a licence with a shellfish entitlement. Vessels without this entitlement are only allowed to land 25 crabs per day. The main regulatory mechanism is a minimum landing size of 65 mm CW in all areas except Shetland (70 mm CW, under the Shetland Regulating Order). 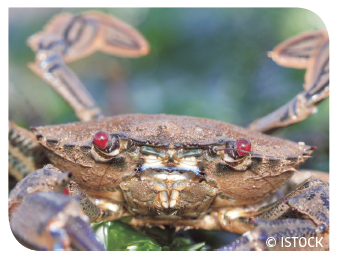 Age determination is generally not possible for animals that moult, and application of age- structured assessment methods to crustacean stocks is problematic. Length Cohort Analysis ( LCA) is the method used for assessing velvet crab stocks. It uses official landings and length frequency data collected as part of the Marine Scotland Science market sampling programme [ 1]. LCA results are presented in terms of yield-per-recruit and biomass-per-recruit, providing estimates of fishing mortality ( F) and a framework for evaluation of management measures. Assuming a direct relationship between fishing mortality and effort, generally, lower levels of fishing effort will result in an increase in stock size and a reduction in landings. A higher level of fishing effort will reduce total stock biomass but landings may also fall, as animals are caught before they have had time to grow to a size that would contribute much weight to the yield (growth overfishing). In between these lies F MAX, the fishing mortality rate that maximizes yield per recruit. It is not possible to directly estimate the maximum sustainable yield ( MSY) for these stocks, hence F MAX is used as a proxy for F MSY [ 2]. The changes that the LCA predicts are long term (equilibrium). The method does not provide any indication of short-term stock dynamics or recruitment over-fishing. Assessments are performed on a regional basis for males and females separately.

Overall, assessments for the period 2009-2012 in areas with sufficient sampling data, showed that most velvet crab assessment units in Scotland were being fished close to or above the F MSY proxy. In some assessment units, a higher yield and biomass per recruit in the long term could potentially be obtained by reducing the level of fishing mortality (effort).