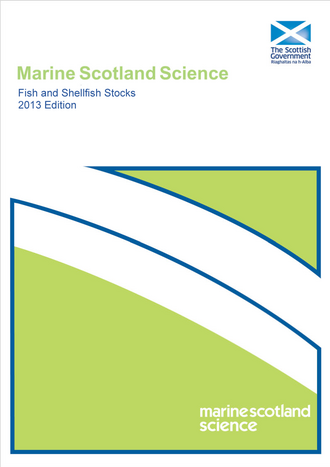 Herring ( Clupea harengus) is the second most important species landed by the Scottish pelagic fleet. It is mainly caught for human consumption by vessels towing large pelagic mid-water trawls, with very little by-catch of other fish.

Biology
During daytime, herring shoals remain close to the sea bottom or in deep water. At dusk they move towards the surface and disperse over a wide area. Although most fish species have a single spawning season, herring is one of the exceptions. The sub-populations of North Sea herring spawn at different times and localised groups of herring can be found spawning in almost any month. The North Sea stock is dominated by autumn spawners. Currently, three major populations can be identified by differences in spawning time and area. These are: Buchan / Shetland herring, spawning off the Scottish and Shetland coasts during August and September; Banks or Dogger herring, spawning in the Central North Sea and off the English coast from August until October; and the Southern Bight or Downs herring, spawning in the English Channel from November until January. For most of the year the different populations mix, but during the spawning season they migrate to their separate areas.

Some herring mature and spawn at two years of age, but most are three or four before they spawn. The number of eggs produced by an average-sized female varies between populations. A 28cm female from the Downs stock produces around 42,000 eggs per year whereas a similarly sized female from the Buchan stock can produce 67,000 eggs. Herring are demersal spawners, depositing their sticky eggs on coarse sand, gravel, small stones and rock. Shoals of herring gather on the Spawning Grounds and spawn more or less simultaneously. Females release eggs in a single batch and the resulting egg carpet may be several layers thick and cover a considerable area. The eggs take about three weeks to hatch depending on the sea temperature.

Many autumn hatched larvae spend their first winter drifting towards nursery areas on the eastern side of the North Sea, around the Moray Firth, the Firth of Forth and in the western North Sea. Their drift rate is variable and in some years many do not reach the nursery areas. As they grow, the juvenile herring move offshore, eventually joining the adult populations in the feeding and spawning migrations in the western areas of the North Sea. Some of the herring in the North Sea nurseries originate from the Spawning Grounds on the north and west coasts of Scotland.

State of stock and advice

The stock assessment was benchmarked in 2012 and a new assessment method was accepted which changed the perception of the stock. ICES classifies the stock as being at full reproductive capacity and as being harvested sustainably, below the current management plan and F MSY targets. The current management plan agreed by EU and Norway in 2008 remains compatible with the precautionary approach.

In 2012, following the assessment benchmark and change in stock perception, the EU-Norway management plan was evaluated by ICES. Eight harvest control rule ( HCR) options were examined for F MSY targets at F=0.24 and F=0.30 and all were based on the assumption that the current low productivity regime for North Sea herring (observed since 2002) will continue. All eight HCR options tested included precautionary scenarios. Only five of the eight HCR options were considered to be appropriate candidates for a long term management plan. A decision on which scenario to adopt as the basis of a revised management plan has been postponed until additional scenarios have been evaluated. This will likely take place in spring 2013.

The year classes from 2002 to 2007 are estimated to be the weakest since the 1970s. The year classes 2008 and 2009 are estimated to be around the long-term geometric mean of the time-series ICES considers that the stock is still in a low productivity phase. The management plan has proved to be an effective tool for maintaining sustainable exploitation and conserving the North Sea herring stock in this lower productivity regime.

Management outcomes for 2013
At the December 2012 meeting in Brussels, the Council of Ministers decided that the international Total Allowable Catch for North Sea herring (north of 53°30'N) in 2013 should be 478,000 tonnes. The UK quota has been set at 70,965 tonnes.

Evaluations and discussions prior to the Council resulted in a potential modification to the herring management plan which may be considered in the future. The plan, which provided a less stringent catch restraint rule, was applied giving rise to a substantial increase in TAC but still keeping the stock within the acceptable boundaries.