Total cereal production in Scotland is estimated to have increased in 2017 by 107,000 tonnes to 2.86 million tonnes. This is slightly below average for the last ten years. While the volume of the harvest was poorer than expected, and moisture content was particularly high, industry experts collecting data have reported no particular concerns over quality.

In 2016 cereals were estimated to have accounted for about 11 per cent of farm output. 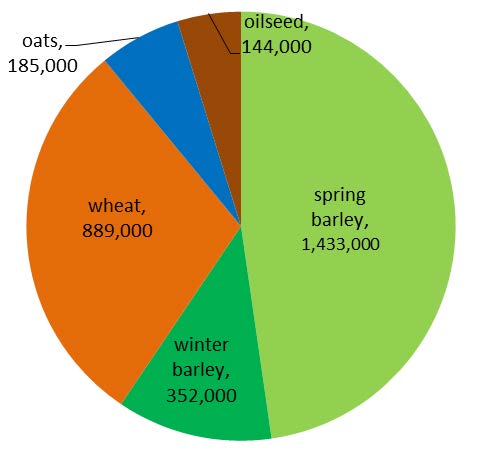 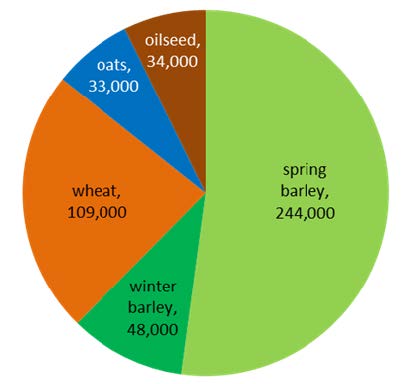 The overall yield estimate for Scottish cereals is slightly above average for the last decade, at 6.6 tonnes per hectare. The yields for barley and oilseed are estimated to have increased, with the yield for wheat and oats falling.

The long term trend of increasing yields remains, with the recent ten‑year average of 6.5 tonnes per hectare three per cent above the previous ten-year 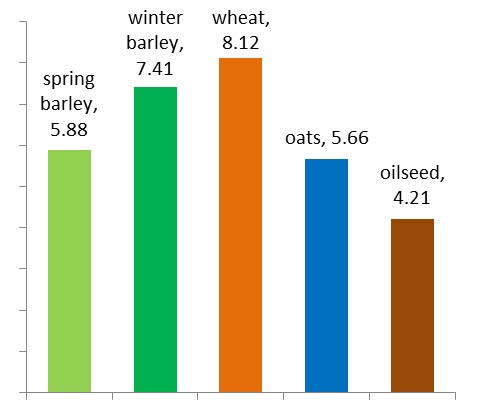 average. This long term increase is likely to be due to an improved efficiency in farming practices as well as development and use of higher yielding crop varieties. The shorter term variations in cereal yields are more likely to be influenced by weather and other conditions during the growing season.

Triticale is a marginal crop in Scotland, grown on around 600 hectares. Because there are relatively few farms growing triticale it is difficult to provide reliable yield estimates, and due to its small size we have now discontinued collection.

Rye is increasingly being grown, though mainly for anaerobic digestion.

Oilseed, though not a cereal, is also shown for comparison in the above charts, though is not included in calculations and commentary about cereal totals.

Chart 7 shows the areas estimated from the June Agricultural Census as bars and the estimated production and estimated average yield as lines. Area is presented in hundreds of hectares, production in thousands of tonnes and yield in tonnes per hectare.

Chart 8 shows the year-on-year change of areas, total production and average yield. This allows the drivers of fluctuations in production to be more easily distinguished and gives a sense of the typical fluctuations from year to year. In chart 8 all measures are presented as the percentage change compared to the previous year.

In the following sections similar charts are used to display the results for each crop group, though the scales of the chart axes are not the same in every case.