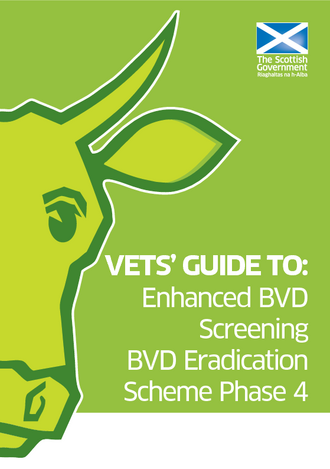 This part of the guidance explains which testing methods may be used to screen for BVD.

There are several testing methods that allow flexibility in screening the different herd types, from crofting to large commercial breeders.

You should work with your clients to ensure the most appropriate testing method is chosen for their circumstances.

Many of the methods for screening herds are based on the Cattle Health Certification Standards ( CHeCS) ( www.checs.co.uk), though they do not precisely reflect them. This means that most of those in CHeCS schemes will normally not need to do anything more than fulfil the requirements of their health scheme.

All breeding herds must be tested using one of the following three methods.

The standard check test is appropriate for herds that have distinct block calving periods. In dairy herds that calve all year round it can be difficult to ensure that the heifer groups are surveyed properly. To ensure that exposure is detected in these herds more animals must be sampled more frequently. The following sampling frame addresses this important difference. It remains important to ensure that each successive group of heifers is sampled. Blood sample no less than 10 animals between the age of 9-18 months per separate group twice per year (no more than a seven month interval between test dates). Sampling the five oldest and five youngest within this age frame in each group should be carried out whilst ensuring that animals are sampled before they are vaccinated.

The number 0 has been allocated for the dairy test on sample submission forms in order that the database can recognise that the dairy check-test has been used.

This is used in herds that are negative. It relies on the principle that where any group of calves has been together for more than two months and a PI is present in the group then the majority of animals in that group will have been exposed to BVD infection and be positive for antibody to BVD. This allows a relatively small number of animals from the group to constitute the sample for the check-test.

It requires all groups from all calving blocks in any one year to be sampled. The visit or visits should be scheduled to ensure that the groups are in the target age range of nine to eighteen months.

Where the majority of calves are sold off the farm before they are nine months, as occurs in many hill and upland beef cow herds, then sampling of calves in the age range of six to nine months is permitted, but the sample size should be increased as advised.

If all the samples are negative, this will constitute a negative result for that year. More guidance on the effective use of the check-test can be found in the online CPD. Where there are a very small number of calves in a herd or group, and they all test negative for antibodies, you may wish to consider asking the testing laboratory to test one sample for BVD virus as they may all be PI calves.

If animals are vaccinated against BVD before the samples for the check-test are collected then the check-test may fail, which may result in a 'not negative' status for your client's herd. Where possible only test unvaccinated animals for a check-test. BVD vaccines differ in their ability to stimulate antibody against BVD that is detected by the screening tests used. Where a modified live vaccine is used all vaccinated calves are likely to test positive for antibody to BVD. Furthermore maternally derived antibody is likely to persist for longer and calves younger than nine months of age are more likely to test positive for antibody. Therefore if animals have been vaccinated by the time they are sampled, please ensure that their vaccination dates and vaccine name are provided to the laboratory.

Each separate group of cattle must be identified and sampled, otherwise the test may fail to detect infection when it is present - see Part 4 for more advice. Failure to survey all the groups effectively results in increased risk of missing the presence of a PI animal and delays the opportunity for you to prevent further losses in your clients' herds. You should speak to your client before cattle are selected for sampling to ensure that all groups have been identified.

Low or inconclusive levels of antibody in one or two animals in a group will require careful interpretation. In these circumstances, the herd's vet, after consultation with the laboratory, may be justified in changing the herd's status from 'not negative' to 'negative'. Assistance with interpretation can be found on the BVD CPD course ( www.gov.scot/bvd). Vets who have successfully completed the CPD course can sanction such changes in a herd's BVD status.

Take samples of blood from not less than five calves in the age range 9 to 18 months in each group (see Part 4 for more information). If there are less than five animals in this age range you should advise if this test is still appropriate or whether a different testing option would be preferable. This judgement will be based on the evidence you are presented with and your professional judgement.

This option is appropriate where the majority of calves are sold off the farm before nine months of age. No fewer than ten calves should be sampled in each group. Note that if this option is used in herds that have used the modified live BVD vaccine then the check-test is likely to fail and result in a not negative status.

If there are fewer than 10 calves aged 6-18 months, then and only then, you may choose to use the following method: take a sample of blood from not less than five animals over 18 months that have been on the holding since birth in each group. If there are less than five animals in this age range then another test such as full herd screen for antigen may be more appropriate.

2. Test all calves for BVD virus

Individually test all calves born in the herd within the year for BVD virus by blood or tissue sample. Calves can be tested as they are born, or all at once later in the year. Testing at birth has the advantage that PI calves can be identified and removed before the breeding season begins.

If all the calves are negative for BVD virus this will constitute a negative result for the year.

3. Test all animals for BVD virus

Individually test all animals in the herd at one time for BVD virus by blood or tissue sample, regardless of age and including bulls. The youngest age at which calves are old enough to be blood tested will be advised by the testing laboratory; this is usually one month. If all the animals are negative for BVD virus ( BVDV), this will constitute a negative result for that year. This may suit herds where BVDV infection is suspected of herds where no other method is suitable. With assumed status for this screening test you now only need to test all calves and all animals that do not have calves as the mother will achieve an assumed status from its calf.

Where possible, for options 2 and 3 samples and any retest required should be sent to one laboratory only. Where samples have been sent to more than one laboratory it is difficult for them to allocate a herd status and you may be asked to help your client with this.

Analysis of results so far has shown that for 12% of beef herds the most recent test result is 'not negative'. For dairy herds this is far greater at around 40%. The bulk milk antibody tests can detect historic infection and/or vaccinal antibodies. It is important that we establish the true level of infection within dairy herds and that PI animals are identified and removed. The bulk milk tank antibody tests were useful for initial screening in the early part of the eradication scheme, but as the scheme progresses we need to know if there is active infection within the herd. On consultation with the industry and scientists, it has been decided to remove the bulk milk antibody testing options from the eradication scheme, however these tests can still provide useful information.

There are a variety of testing options available to detect BVD, some of which are used in mandatory annual screening and others which may be used for follow-up testing.

Maternally derived antibody results in a diagnostic gap for the detection of BVD virus in blood samples from young animals. The duration of the gap is related to the test and the testing system. You should consult with your laboratory regarding what age the calves should be tested for the testing system that is to be used.

There is not considered to be a diagnostic gap where tissue samples are used as the sample for virus detection.

Milk may be tested for BVD virus but only by the polymerase chain reaction ( PCR).

Antibody detection ELISA
Antibody detection ELISAs are accurate and suited to high-throughput testing. They are available in a variety of formats so that results are given in different ways, which can be confusing. Labs will provide interpretation and explanatory notes specific to the test that has been used. Not all samples are clearly negative or positive. Those with readings around the negative/positive cut-off value may be classified as inconclusive. The Scottish Government scheme has had to accommodate the inconclusive results and has included them with positive results to classify a group as 'not negative'. A 'negative' group contains only animals with no BVD antibody. Where an inconclusive result or missing sample is reported from the laboratory a replacement sample which tests 'negative' will need to be provided in order to achieve a 'negative' herd status.

BVD antigen detection ELISA and PCR for BVD virus
Samples will be reported as negative or positive for the presence of BVD virus. Only rarely will a sample be classed as inconclusive necessitating a retest.

An animal that tests positive for the BVD virus will usually be PI, but it is recommended that to confirm an animal as PI it should be sampled for a second time after at least three weeks. True PI animals will be virus positive in both tests. Any animal undergoing an acute transient infection at the first test will be virus negative and antibody positive at the second test. A PI should test antibody negative.

Any PI animal that has been vaccinated against BVD continues to shed high levels of infectious virus and is unlikely to produce enough antibody in response to vaccination to block the detection of the virus in the blood.

The PCR test is also sufficiently sensitive to be used in other pooling systems with both blood and tissue, but you should discuss any age restrictions that apply to calves when blood samples are used with your test provider.

Who can take samples?

Who can test samples?
For any of the mandatory screening tests, samples must be tested by a laboratory approved by the Scottish Government. Part 5 gives more details. A list of approved laboratories is available at www.gov.scot/bvd.

At the date of publication eight laboratories are approved for testing for the BVD eradication scheme. For up to date information and contact details for laboratories please consult the website
www.gov.scot/bvd

Can a herd status be changed?
Yes - a veterinary surgeon can change a herd status for a client from not negative to negative, subject to certain conditions - see Part 7 for more details.