Police Scotland has continued to recognise that wildlife crime attracts significant public interest and in 2015 has further developed the capacity and capability it has in place to tackle these issues.

In March 2015 the first Wildlife Crime Officer Awareness course was held at the Police Scotland College, Tulliallan. The one day course provided a basic introduction to wildlife crime for those officers with little or no wildlife crime investigation experience. As well as inputs covering the six wildlife crime priorities, there were further presentations from the National Wildlife Crime Unit, Scottish Natural Heritage, COPFS and BASC. Forty officers attended representing all Divisions across Police Scotland, as well as an officer from British Transport Police. 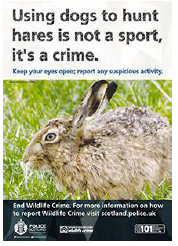 The campaign included print advertising in national newspapers and regional titles across Scotland, social media advertisements, the use of stencils in public parks and the distribution of A4 posters highlighting the national priorities.

Across Facebook, Twitter and YouTube wildlife crime key messages were regularly posted throughout the campaign period and the content included videos, photos, case studies and infographics to bring the messages to life and reach an audience in the region of 1.2 million people. In addition, a dedicated public facing internet page was created on the Police Scotland website providing information on aspects of wildlife crime, what to do at the scene of a potential crime and how to report it.

As well as the external aspects of the campaign, Police Scotland ran a parallel internal communications campaign. This included a series of six articles on wildlife crime on the Police Scotland intranet and the creation of a specific wildlife crime page in order to raise awareness and better equip officers and staff to deal with incidents. A pocket sized Wildlife Crime Guidance booklet was distributed in hard copy and is now available as an e-document on the force intranet. The booklet provides information and advice for officers and staff on a wide range of wildlife crime enquiries including key aspects of crime scene preservation, legislation and contact details for significant partners.

Throughout the summer officers once again provided a major contribution to the PAW Scotland presence at a range of events. The Royal Highland Show, the RSPB Big Nature Festival and the Scottish Game Fair at Scone, were again just some of the national events attended, whilst at a Divisional level officers also had a presence at a significant number of local events right across the country, from the Borders Union in the south to the Black Isle Show in the north. 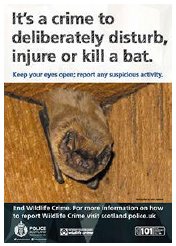 On 24th September 2015, the college at Tulliallan hosted a Continuous Professional Development event for those involved in wildlife crime law enforcement. Although the majority of attendees were from Police Scotland, representatives from COPFS, UK Border Force, SASA and Scottish Natural Heritage were also in attendance. Approximately 80 attendees received presentations on Firearms Licensing, the Trade in Endangered Species, Corporate Communications and Forensics, as well as two case studies covering the first Vicarious Liability case in Scotland and the Black Isle red kite enquiry.

The growth of the internet has impacted on many areas of crime and wildlife crime is not immune to this. Operation COBRA 3 was the biggest ever coordinated international law enforcement operation targeting the illegal trade in endangered species. Police Scotland worked closely with the National Wildlife Crime Unit, Border Force and Europol on a number of investigations and as a result search warrants were executed at commercial and domestic premises across Scotland. The internet allows those committing this form of criminality far larger markets in which to trade but has also meant that the public has greater visibility of potential crimes leading to increased reporting to law enforcement agencies. 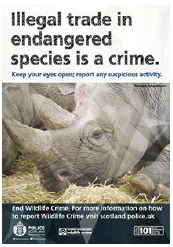 Finally, 2015 saw the appointment of a further full time Wildlife Crime Liaison Officer ( WCLO) with the creation of a post in Highland and Islands Division. This new appointment increased the number of full time WCLOs in Scotland to six with another 7 Divisions having a part time WCLO, an improvement on the number prior to the establishment of a single force in 2013.