Section 3: Vision, Action Areas and Making Progress Towards our Outcomes

This Strategy sets out our vision, developed with our partners, which is to eliminate human trafficking and exploitation.

The Action Areas that will help us to move towards the vision are:

Each of these Action Areas leads to general and then specific outcomes.

The table below sets out the relationship between the vision, action area and outcomes.

If we want things to change, we need to know in relation to each Action Area:

The following sections set this out.

This Strategy cannot capture all of the work already going on in different agencies and organisations. As set out above, we anticipate that regular Stakeholder Forums will enable us to capture some of that work.

The Scottish Government funds specialist support for all adult victims of human trafficking (the offence under section 1 of the Act) who are recovered anywhere in Scotland. In 2017, this is provided by two third sector organisations, the Trafficking Awareness Raising Alliance ( TARA) and Migrant Help. TARA specifically provides support to adult women who have been trafficked for sexual exploitation, while Migrant Help provides support to all other adult victims of human trafficking. They work with local authorities and other bodies such as the NHS that have relevant duties towards victims of trafficking, to provide support.

The Scottish Government also funds specialist psychological trauma support to adult victims of human trafficking. From 2017-2019 this will be provided by the Anchor Centre.

At the moment, these arrangements do not cover victims of an offence under section 4 of the Act (slavery, servitude and forced or compulsory labour). This is an issue that will be considered further.

All victims of crime in Scotland have rights as set out in the Victims' Code for Scotland. A number of organisations provide support to victims including Victim Support Scotland who provide emotional support, practical help and information.

An adult victim of human trafficking or exploitation could also be an adult at risk of harm. Where appropriate, adult protection measures can be used in addition to the support provided through specialist help or, instead of specialist help where an adult does not consent to entering the NRM and is ineligible for specific support for potential victims of human trafficking.

The Adult Support and Protection (Scotland) Act 2007 may therefore be considered in relation to certain human trafficking or exploitation incidents when the adults at risk are adults who:

a) are unable to safeguard their own wellbeing, property, rights or other interests;

c) because they are affected by disability, mental disorder, illness or physical or mental infirmity, are more vulnerable to being harmed than adults who are not so affected.

All support is provided with the aim of helping victims to begin to rebuild their lives and move on to the next stage of their recovery.

Pursuant to section 8 of the 2015 Act, the Lord Advocate has published Instructions for Prosecutors when Considering the Prosecution of Victims of Human Trafficking and Exploitation. These set out that if there is sufficient evidence that a person aged 18 or over has committed an offence and there is credible and reliable information to support the fact that the person:

a) is a victim of human trafficking or exploitation;

b) has been compelled to carry out the offence; and,

c) the compulsion is directly attributable to being the victim of human trafficking or exploitation, then there is a strong presumption against prosecution of that person for that offence. Greater awareness of these instructions could encourage victims to come forward.

For people under 18 different considerations apply. These are discussed in more detail in Section 4.

The provisions of the Act make it simpler to take action against trafficking and exploitation and raise the maximum penalty for relevant offences to life imprisonment.

As set out above, the Act introduces new court orders TEPOs and TEROs to disrupt trafficking and exploitation and also provides for the forfeiture of certain assets in cases with a connection to trafficking.

The then Lord Advocate and the other heads of prosecution services in the UK signed up to a set of commitments in 2016. These commitments set the standards by which prosecutors will deal with human trafficking and exploitation cases, and how the prosecution services across the United Kingdom will work closely together in order to disrupt networks, prosecute perpetrators and safeguard victims' rights.

COPFS has appointed specialist prosecutors who act as the single point of contact on these types of cases and provide a consistent and robust approach.

In addition, the Victim Information and Advice Service ( VIA), part of COPFS, and the court based Witness Service, part of Victim Support Scotland, are available to support victims and witnesses during the prosecution process. Alleged victims of human trafficking are automatically entitled to use standard special measures to support them in giving evidence and further special measures are available on application to the court.

Scotland's Serious Organised Crime Strategy recognises that human trafficking, and exploitation, occurs throughout Scotland and is not confined to our major cities. In taking forward implementation of the Serious Organised Crime Strategy detailed action plans will be prepared under its four strands: Divert, Deter, Detect and Disrupt, identifying key priority activities to secure the outcomes set out. One of the key outcomes under the Disrupt Strand is improved sharing of intelligence and information across relevant organisations including local authorities, regulators and UK and international law enforcement agencies.

The Scottish Government published Scotland's Place in Europe in December 2016. This makes clear that it will be important to ensure continuing participation in law enforcement, criminal law and civil law measures, including Europol and Eurojust [3] , including with regard to human trafficking cases.

The Independent Anti-Slavery Commissioner is engaging with Police Scotland to explore the feasibility of allowing partner law enforcement agencies to second officials to Police Scotland, to enhance the response to transnational human trafficking and engaging with them on data collection. 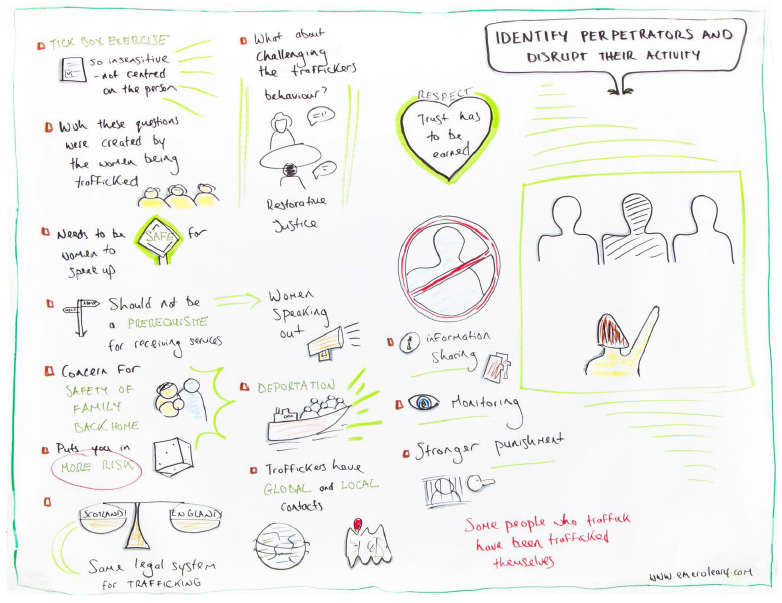 Action Area 3 - Address the Conditions that Foster Trafficking and Exploitation

The Scottish Government is taking a robust approach to tackling poverty and inequality within Scotland which will, in turn, help to address some of the conditions that foster trafficking and exploitation here. The Fairer Scotland Action Plan published in October 2016 makes a clear commitment to take long-term action to change Scottish society and make it a fairer and more equal place to live.

The Scottish Government will continue to support measures that can help reduce the harm caused by prostitution and encourage the enforcement of existing laws against those who seek to exploit others through prostitution.

The Scottish Government's International Development Fund puts gender equality at the heart of all of its development projects, ensuring that women and girls are given the opportunity to flourish through social and business development projects such as healthcare, scholarships, women's leadership initiatives and micro-finance programs.

In 2015, Scotland adopted the United Nations Sustainable Development Goals ( SDGs), [4] which outline a number of high-level objectives for countries, including ending poverty, ensuring access to education and achieving gender equality. Monitoring of progress will take place through the National Performance Framework and the Scottish National Action Plan on Human Rights. Whilst a good number of these global goals will help to address the wider factors that foster human trafficking and exploitation, there are some that specifically make reference to the issue.

Scotland's Serious Organised Crime Strategy has an action to make people more aware of the links between trafficking and exploitation and Serious Organised Crime. It also seeks to make people aware of the close links between counterfeit and smuggled goods and the misery of trafficking and exploitation, to help ensure the public do not fund such activities.

The Scottish Government's National Missing Persons Framework for Scotland seeks to prevent and reduce harm related to people going missing through partnership and multi-agency working. It will provide a national focus for consistent good practice and focus on prevention through areas such as appropriate information, return home interviews and prevention planning for vulnerable individuals.

For both regulated procurements (£50,000 up to EU thresholds) and EU procurements (above the EU thresholds), a breach of Part 1 of the Act is a mandatory exclusion provision. By applying exclusion grounds to lower value contracts Scotland has gone further than the rest of the UK in its procurement regulations. Scottish procurement regulations also place a statutory obligation on public bodies to include relevant clauses in their contracts to ensure those they contract with comply with environmental, social and employment law obligations. Supporting guidance has been issued to public bodies, which includes contract conditions that bodies can adapt for use in their contracts.

Statutory guidance under the Procurement Reform (Scotland) Act 2014 was published on 5 October 2015, providing guidance to public bodies on how to evaluate fair work practices, including the Living Wage, when selecting tenderers and awarding contracts.

Scotland's National Action Plan ( SNAP) on Human Rights includes a commitment to ensure a victim centred approach to tackling human trafficking and exploitation. This is monitored by the SNAP Justice and Safety Action Group.

The Scottish Government is committed to ensuring that workers in the developing world achieve a fair price for the goods they produce. By encouraging a decent living wage farmers and producers are empowered to compete in the global marketplace through direct, long-term contracts with international buyers. By helping to challenge the unfair trading systems that keep many people in poverty, we can help stop people being made vulnerable to trafficking or exploitation.