Landman Economics and Virtual Worlds were commissioned by the Scottish Government to produce four sets of projections for child poverty in Scotland, required for the Child Poverty (Scotland) Act (Scottish Parliament 2017b), which includes a set of child poverty targets to be achieved by 2030. This report describes the methods we used to forecast child poverty and gives details of our results.

1.1 Outline of the report

This introductory chapter sets out the background to our work. We discuss the Child Poverty (Scotland) Act, and also recent developments in the UK Government’s welfare reforms, as well as recent tax and social security measures announced by the Scottish Government which may have an impact on child poverty in Scotland. We then briefly discuss the key demographic and economic trends in Scotland and the UK.

Chapter 2 discusses our methods. We describe the four child poverty measures contained in the Child Poverty (Scotland) Act and explain how we model them using a microsimulation model (the Landman Economics/ IPPR/Resolution Foundation tax-transfer model) and a large-sample dataset (the Family Resources Survey).

The Child Poverty (Scotland) Act places a duty on the Scottish Government to ensure that four child poverty targets are met during the 2030/31 financial year [1] . The four targets are:

1. Less than 10% of children living in relative poverty;

2. Less than 5% of children living in absolute poverty;

3. Less than 5% of children living in combined low income and material deprivation; and

4. Less than 5% of children living in persistent poverty.

All four measures are based on After Housing Costs ( AHC) disposable income.

The Act was passed unanimously by the Scottish Parliament on 8 th November 2017 (Parliament 2017a; Southwick and Hutchison 2017).

Chapter 2 below discusses these four poverty measures more fully, and our approach to measuring and forecasting them.

Fundamentally disagrees with this approach: in particular, the removal of income-based targets, and the use of alternative measures that do not take income into account. In the Scottish Government’s view, this represents a shift towards characterising poverty as a lifestyle choice rather than addressing the social and economic drivers that cause people to fall into or remain in poverty [3] .

1.4 Reductions in the generosity of social security payments

The UK Government’s July 2015 Budget also announced several changes to the social security system which are forecast to have a significant impact on child poverty in the UK (including Scotland). The most important of these in terms of the number of people affected and the overall size of the reduction in social security spending as a result of the reforms are:

A further important driver is the gradual introduction of Universal Credit ( UC) ( DWP 2013), which is intended to replace the current system of tax credits and most means-tested benefits with a single unified system. In most cases UC is less generous than the benefits and tax credits it replaces (Browne, Hood and Joyce 2016). The introduction of UC has been extremely fraught (Timmins 2016) and national roll-out of the policy is well behind the UK Government’s original schedule, but has now been accelerated (Gauke, 2017).

In the wake of the Scotland Act 2016, which devolved further powers over part of the social security system to Scotland, the measures that the Scottish Government has introduced, or is planning to introduce, include:

The Scotland Act 2016 also enabled the Scottish Government to set its own income tax rates and bands on non-savings and non-dividend income. Table 1.1 shows the new rates which will apply for the 2018/19 tax year in Scotland and compares them with the rates which remain in place in the rest of the UK.

The new Scottish rates of income tax result in a tax cut for people in Scotland earning between £11,850 and £26,000 per year compared to the system in place in the rest of the UK; this tax cut is worth a maximum of £20 per taxpayer annually. Above £26,000 annual gross income, the increase in marginal rates (and setting the higher rate threshold at £43,430 in Scotland rather than £46,350 in the rest of the UK) results in higher income tax payments, the extra revenue from which is being reinvested into public services to offset the impact of the UK Government’s cuts to the Scottish Government’s budget settlement (Scottish Government, 2018). It should be noted that the impacts of the reinvestment of additional tax revenues into public spending are not captured in the modelling used in this report (except where the additional revenue is being used to increase social security payments, as in the reforms to Carers Allowance and the introduction of the Best Start Grant).

Important as the Scottish Government’s new tax and social security measures are, we show in Chapter 3 that their effects are relatively minor compared to the UK Government cuts that have already happened or are in the pipeline.

1.8 Trends in population and employment

As well as changes to the tax and social security system, the extent of child poverty depends also on demographics and the state of the economy.

Appendix 1 below discuss how we use economic and demographic forecasts in our microsimulation work. Here we briefly note two things.

Firstly, political events, especially Brexit, mean that there is a higher than usual level of uncertainty about the path of the Scottish population and the Scottish economy. Figures 1.1 and 1.2 below illustrate this; they show the range of official population forecasts for Scotland, for all people (Figure 1.1) and children only (Figure 1.2) [5] . Differing assumptions about fertility, life expectancy and, in particular, inward migration mean that by the end of our forecast period there is a range of 700,000 between the highest and lowest official forecast for total population, and over a quarter of a million for children. The wide range of forecasts is reflected in the robustness analysis of the results in Section 3.5 of this report where using different sets of population forecasts produces a bigger variation in projected child poverty rates than for any of the other forecast parameters (for example earnings or employment). 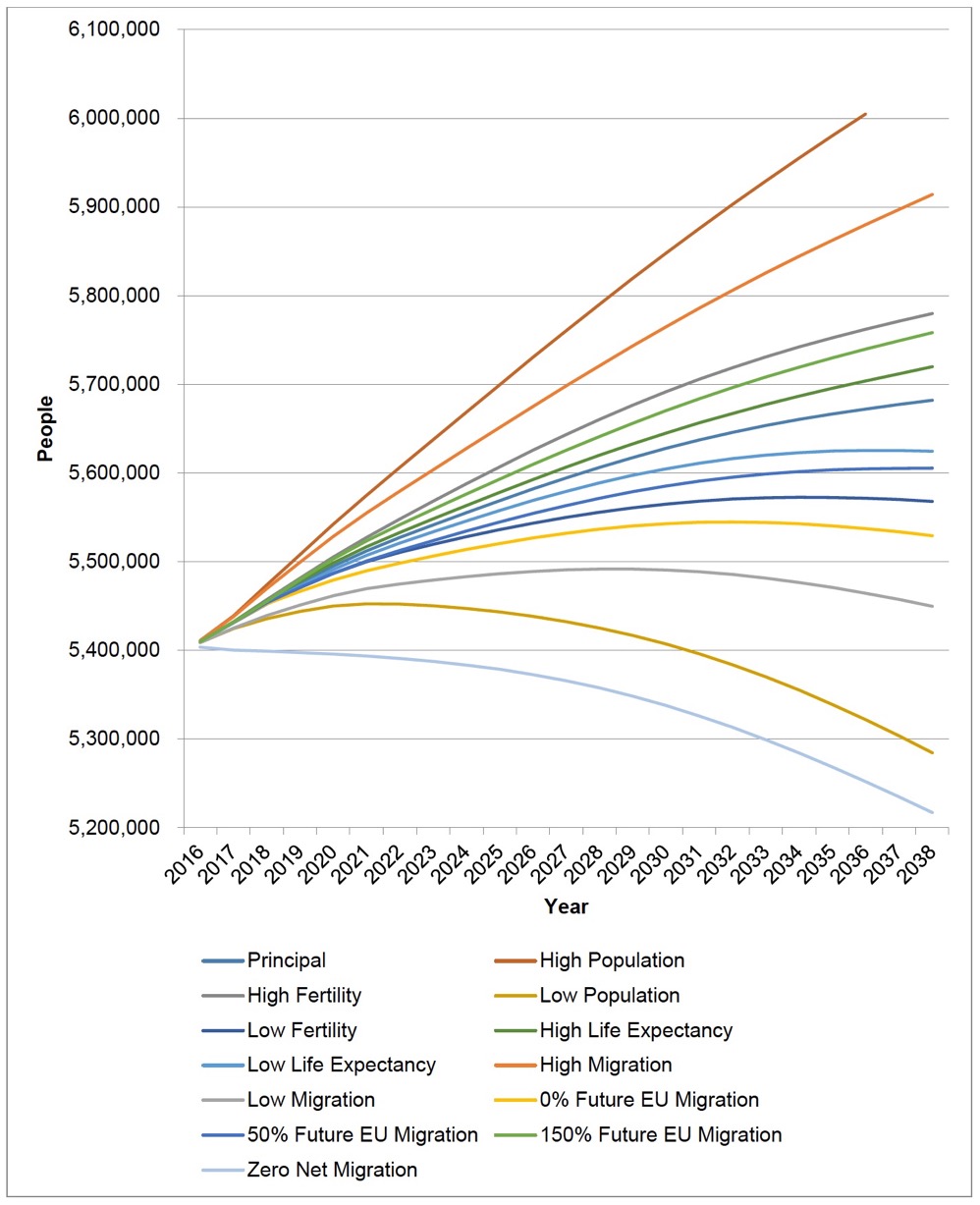 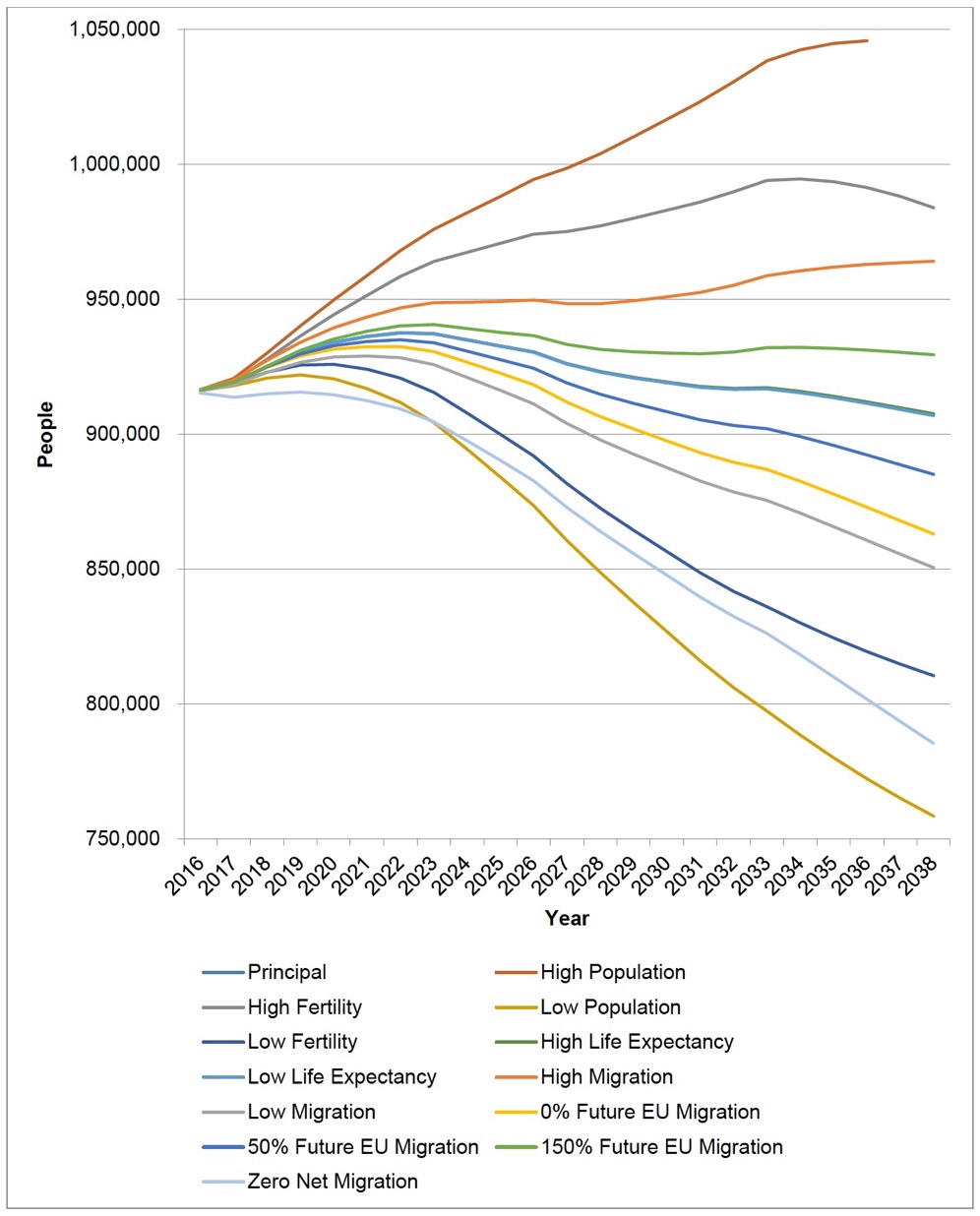 Secondly, although we have put a lot of effort into capturing their effects accurately, in practice our results are not primarily driven by demographics or the projected state of the economy. Figures 1.3 and 1.4 below show projections for numbers of children (by age group and gender) and for employment and unemployment levels, for the baseline and one pessimistic projection (zero net migration from the EU post-Brexit). 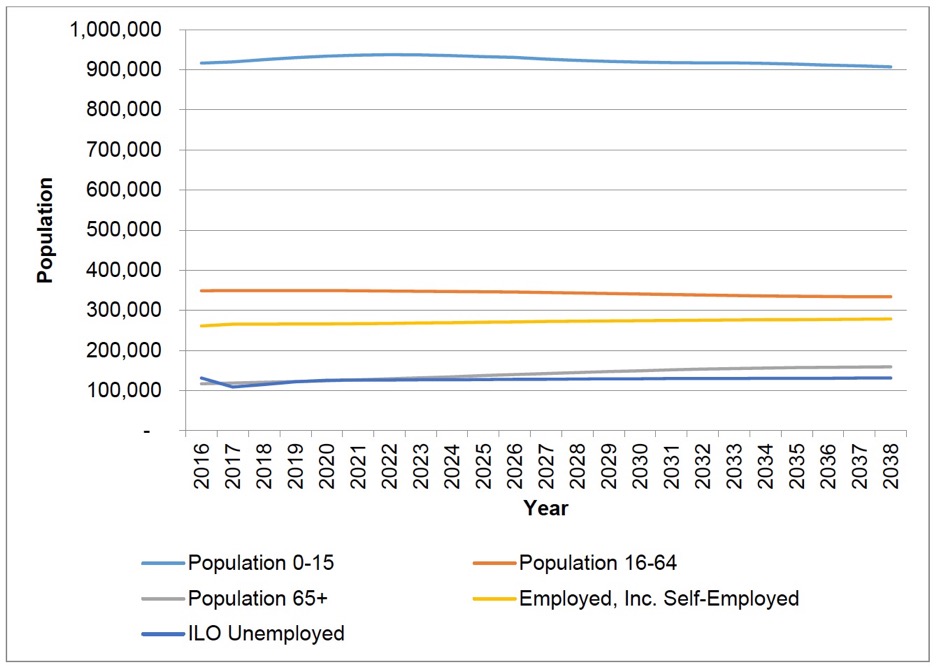 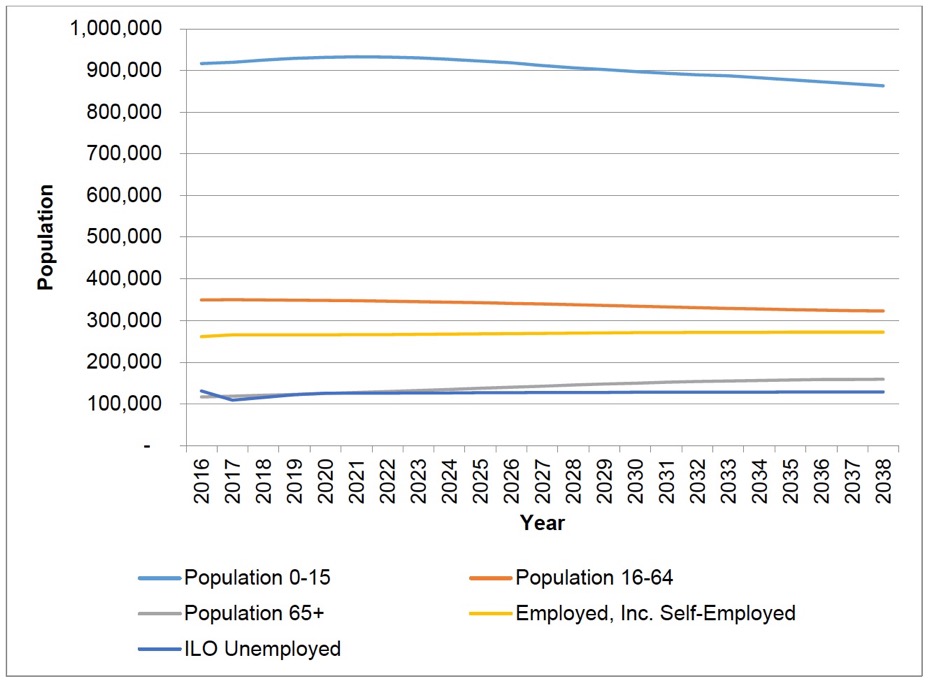 The Scottish Fiscal Commission ( SFC) is now responsible for producing independent forecasts for Scotland. SFC produced their first forecast for the Scottish economy in December 2017 ( SFC 2017), and we take our projections for the paths of earnings and employment from there. Since (as discussed below), our poverty lines are calculated using data for the UK as a whole, we also use UK-wide data from the corresponding Office for Budget Responsibility ( OBR) forecast ( OBR 2017) to provide projections for the paths of earnings and employment for the rest of the UK.

As shown in Table 1.2 below, the SFC forecast paints a picture of relatively sluggish growth in both output per head and employment.

This is true also of the OBR forecast for the whole UK, as shown in Table 1.3 below, which compares the SFC Scottish forecast with the OBR UK-wide one for the early years of our simulation period. Both Scotland and the UK are forecast to have historically slow growth, but the forecast UK growth is slightly higher [6] . However, the forecast divergence in growth between Scotland and the rest of the UK could be significant for our study because the poverty lines used in our poverty measures [7] increase with UK income ( DWP 2016b), and therefore slower growth in Scotland compared to the rest of the UK could cause measured relative poverty in Scotland to increase even if there was nothing else going on, due to slower real income growth causing more households to fall below a relative poverty line which is calculated based on UK-wide household incomes [8] . As discussed in Chapter 3, however, using OBR's and SFC's central projections, this effect appears to be small [9] .