Priority 2 – A Scotland Where We Flourish In Our Early Years

We want Scotland to be the best place for a child to grow up. This priority places particular emphasis on our early years, recognising the impact that early childhood poverty, disability and adverse childhood experiences can have on health outcomes throughout a person's life.

Children's early health and development is shaped by a wide range of factors and so all of the other five public health priorities are also important for child health. Children will have the best chance of flourishing when their families have a fair income (Priority 5), they live in a neighbourhood that promotes safe physical activity (Priorities 1 and 6), their parents have good mental wellbeing and are free from harmful substance misuse (Priorities 3 and 4), and they have access to nutritious food from breastfeeding onwards (Priority 6).

Creating the conditions which best support child health and development requires coordinated action across central and local government in sectors such as health and education, as well as strong partnership with families. There needs to be sustained focus on the fundamental determinants of health, children's rights, and equity.

The closer that babies are born to their 'due' date (at 40 weeks of pregnancy/gestation), the better their health and developmental outcomes. Babies born at less than 37 weeks of pregnancy are considered to be preterm. The earlier that babies are born, the higher the risk they will have serious problems immediately after birth. Complications associated with prematurity are the commonest cause of death in young babies in Scotland. Babies born preterm who survive are at risk of long-term health problems such as vision difficulties, ongoing breathing problems, and high blood pressure. They are also at risk of developmental and cognitive problems affecting their learning at school. Preterm birth can be spontaneous (following the mother going into labour or her waters breaking) or the result of medical intervention. Babies of multiple pregnancies (twins or more) are at much higher risk of being born prematurely than singletons.

The Euro-Peristat project publishes information on the health of mothers and babies across Europe. The latest report, published in 2018, provides information on babies born in 2015 in 34 countries (including the four nations of the UK).[5] Figure 4 shows the percentage of live, singleton babies born in 2015 that were delivered prematurely. Results are displayed for the 22 countries that had at least 50,000 live births in 2015, had gestation at delivery known for at least 95% of births, and were able to show separate results for babies from singleton and multiple pregnancies.

Figure 4: Percentage of live singleton births that were born preterm (gestation below 37 weeks) in 2015 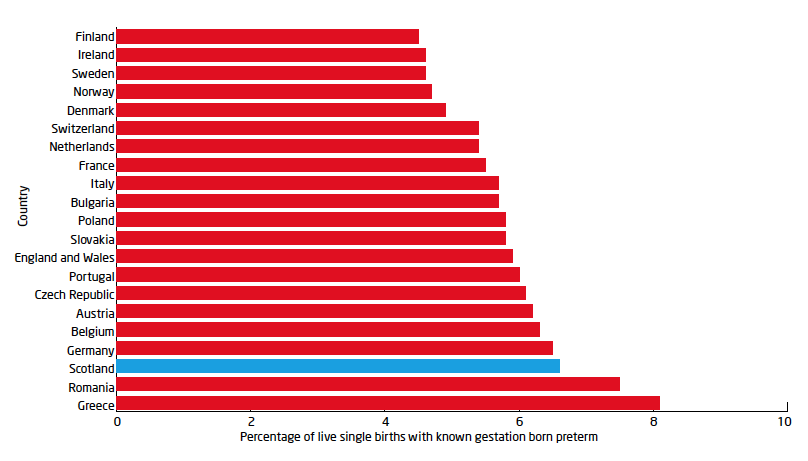 The rate of prematurity in Scotland has also increased over time. The percentage of live singleton babies born prematurely has increased from around 5% in the mid-1970s (when reliable records began) to around 6.5% now. The percentage of live babies from a multiple pregnancy that are born prematurely has also increased: from around 33% in the mid-1970s to around 66% now. The ongoing increase in the prematurity rate seen in Scotland is not inevitable. The Euro-Peristat report compared trends in the proportion of babies born prematurely in different countries and found that some countries have seen a reduction in prematurity between 2010 and 2015.

The Euro-Peristat report shows that many of the risk factors for preterm birth, for example maternal smoking and maternal overweight and obesity (see Priority 6 on page 18) - are relatively common in Scotland compared to other countries. Scotland also has persistently high social inequalities and high medical intervention rates in pregnancy, for example a high proportion of babies delivered by caesarean section.

As prematurity is such a key risk to children's short and long-term health and development, Scotland's high, and increasing, prematurity rate is a cause for concern. International comparisons suggest that more could be done to reduce our prematurity rate, and ensure that children have the best chance to flourish in their early years.