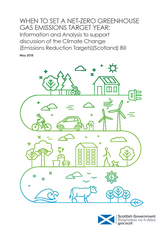 The Climate Change (Scotland) Act 2009 established the principles of an evidence-based approach to setting targets. In particular, it gave a statutory role to an independent body – the UK Committee on Climate Change ( CCC) – to provide regular expert advice to the Scottish Ministers. Committee members are experts in the fields of climate change, science, economics, behavioral science and business and have a statutory duty to act impartially and objectively.

The Scottish Government sought, and received in March 2017, advice from the CCC in preparation of the Bill. The advice is available at: https://www.theccc.org.uk/publication/advice-on-the-new-scottish-climate-change-bill/

Excerpts from the UK Committee on Climate Change’s advice

“Scotland’s existing 2050 target is for a reduction in greenhouse gas emissions of at least 80% on 1990. It is designed as a contribution towards a global effort to limit temperature rise to close to 2°C, and is already stretching. Setting more ambitious targets now to align to the aims of the Paris Agreement would require actions that are currently at the very limit of feasibility.”

“A 90% reduction in greenhouse gas emissions would be more consistent with the temperature limits set out in the Paris Agreement.”

“A reduction in GHG [Greenhouse Gas] emissions of 90% would require strong progress in every sector and is at the limit of the pathways currently identified to reduce Scottish emissions. By adopting a more ambitious 2050 target than currently exists for Scotland, or for the UK as a whole, it would be important to identify the areas in which Scotland will go further than the rest of the UK”.

Section 4: The scale of the challenge
Section 2: International comparisons