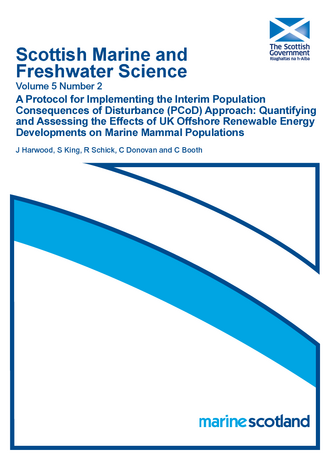 We stress again that the results presented here are only intended to demonstrate how the interim PCoD protocol could be implemented and to illustrate the kinds of output and summary information that it can generate. They should not be interpreted as predictions of the likely population-level effects of actual offshore renewable energy developments. Similarly, we reiterate that the relationships between the number of days of disturbance experienced by an individual marine mammal and its vital rates, derived from the expert elicitation process described in Appendix 1, were developed specifically for use within the interim PCoD framework. They should not be used outside this context.

We would also like to emphasise that the approach we have developed for assessing the potential effects of offshore renewable energy developments on marine mammals in UK waters is very much an interim one, designed to cope with the almost complete absence of the empirical data that are required to develop an evidence-based approach. In the absence of those data, we believe that the interim approach described here provides a rigorous, auditable and quantitative methodology, based on the best available evidence, which can be used to inform the consenting and decision-making processes for offshore energy projects. In particular, it provides the only currently-available tool for assessing the cumulative effects of a single development over the course of construction on a range of marine mammal populations, and for assessing the cumulative impacts of multiple developments that use different technologies.

However, it is important that empirical data to implement a full PCoD approach are collected as soon as possible in order to reduce the large degree of uncertainty that will be associated with any assessments performed using the interim approach. At present the interim approach relies heavily on a series of strong assumptions (summarised in Box 4) and the opinions of a large number of experts. However, these opinions have been gathered and collated using internationally recognised techniques and statistical methods.

This protocol assumes that an Environmental Statement will contain:

The expert elicitation process assumes that:

The model which estimates the total number of animals that may experience PTS within one year and the number of days of disturbance experienced per year assumes that:

The sensitivity analysis described above has revealed that the assessments are likely to be particularly sensitive to assumptions about the way in which individual marine mammals respond to repeated exposure to the noise associated with the construction and operation of offshore renewables devices and, to a lesser extent, the proportion of the population within an MU that is vulnerable to the effects of a development. It is also clear that the effect of experiencing PTS on survival and fertility has a large impact on the population consequences of a particular renewable energy development. We have had to rely on expert opinion for the values used to assess the effects of PTS, given the complete lack of empirical information on the subject. Nevertheless, the results demonstrate the importance of mitigation measures designed to reduce the risk that any individuals will suffer PTS.

Although we have tried to account for the more obvious sources of uncertainty in the approach we have developed, there is one major source of uncertainty that we have not addressed. This is model uncertainty: the fact that the highly simplistic model linking number of days of disturbance to changes in individual vital rates may not accurately reflect this relationship. Further research to develop more realistic relationships that can be parameterised with empirical data is urgently required to address this.

As noted in the Methods section and discussed in the section on interpretation of model outputs, we have not incorporated any form of density dependent response in the current version of the interim protocol. As a consequence, any additional mortality, or decline in fertility, caused by disturbance or PTS will result in a decrease in the size of the disturbed population compared to an identical undisturbed population that will persist for many years. Most of the standard procedures used to set limits on the number of animals that might die as a result of human activities, such as the PBR (Potential Biological Removals) formula that SMRU has use to advise the Scottish Government on the number of 'unnatural' deaths that a seal population can sustain, assume some form of density dependence. Therefore, ignoring density dependence will probably result in an over-estimate of the long-term effects of the disturbance associated with offshore renewable energy developments on marine mammal populations and thus can be considered precautionary.

Unfortunately, the only priority species for which we have strong evidence of density dependence is the grey seal. However, grey seal pup survival appears to be related to the density of animals at individual breeding colonies (Harwood & Prime 1978) rather than the size of the population within any of the MUs identified in Anon. (2013). Russell et al. (2013) have shown that grey seals from individual MUs on the east coast breed at many different colonies around the UK. As a result, the effect on a particular breeding colony of a decline in the size of the population in one of these MUs will be diluted by animals from other, unaffected MUs and so there is unlikely to be any concomitant increase in pup survival at that colony.

Density dependence is an emergent property of agent-based population models that use an individual's energy budget to predict variations in its vital rates. Nabe-Nielsen et al. (2012) used a model of this kind to investigate the effects of operational noise associated with offshore wind farms on harbour porpoises in Danish waters, and the development of similar agent-based models for the priority species in UK waters would make it possible to incorporate realistic models of density dependence into the interim PCoD protocol.

Acknowledgements
Interpretation of the Outputs from the Interim PCoD Scenarios