Some problems with self-sampling did occur. In particular incomplete log records were returned from most vessels e.g. only in the second season were tows reported where spurdog were not caught. Problems with skippers accurately labelling fish boxes returned to Barratlantic were also encountered (for example a number of boxes had the vessel name but no date whilst others lacked both vessel name or date) but this did improve as the project progressed. Not all the samples returned could therefore be matched with logsheet records. All fish which could be unequivocally matched with logsheet records were measured and sexed. Remaining fish which could only be allocated to vessel (but not catch date) were also measured and these data are included in the overall comparisons of lengths. Because a large number of measurements were taken it was felt that the data on size and sex ratio are robust and there was also no visual evidence that the sizes of the remaining unallocated and un-measured fish were different to those measured.

All tows were made using commercial twin-rig or single-rig Nephrops trawls with nominal 80 mm mesh cod-ends. Reported tow durations ranged from 3.75 h to 7 h (mean 290 mins based on 221 tows). Towing speed was generally between 2.2 and 2.5 knots. During winter one or two tows were usually completed per day but in summer up to four tows were made per day.

In the winter 2013/2014 season nearly all the reported spurdog catches were from the Sea of Hebrides but this may reflect fishing patterns that season (Figure 1). Bad weather meant that little fishing took place in the Northern Minch and only Cheerful reported a significant number of tows. In total the reported amount of spurdog caught (discards plus samples returned to shore for measurement) was 19,210 kg (from the three participating vessels although the majority of records and samples received were from the Cheerful). Other vessels operating in the area had been asked to record spurdog discards via the local fisheries officers but verbal reports were received that some vessels had problems recording spurdog using the electronic log system - the total amount being discarded across the whole fleet is therefore unknown.

The total amount reported discarded during spring (March to May) 2014 was 4,000 kg but this was from a single derogated vessel, the Cheerful, which returned logsheets for that period (Figure 2).

The total amount reported from June to Sept. 2014 was 7,200 kg but this was again from a single vessel, the Cheerful (Figure 3). Anecdotal comments suggest that at this time a large number of the fish were under market size. Unfortunately measurements on these samples were not obtained due to logistical problems.

In the following winter season renewed efforts were made to engage more vessels in the project. From Nov 2014 to Feb 2015 the total amount of spurdog reported caught by the four vessels supplying samples during was 25,469 kg. The majority of the catches were in the Sea of Hebrides (98% by weight) but again this will be influenced by relative fishing effort. Tow locations where spurdog were not caught were supplied by two of the participating vessels during the winter 2014/2015 season (one operating in the North Minch and one in Sea of Hebrides) so that the distribution of fishing effort versus spurdog catches can be better judged for this period (Figure 4). However, caution is advised in interpreting Figure 4 because the southern vessel was using twin-rig gear and the northern vessel single rig gear so this might also have contributed to higher spurdog by-catch levels in the Sea of Hebrides (on the assumption that the twin-rig gear may have had a wider swept area). 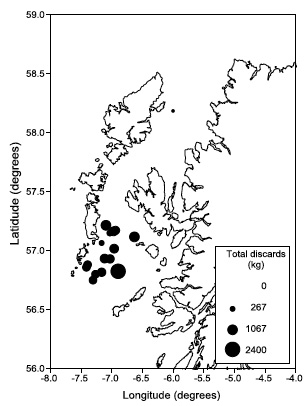 Figure 2: Reported locations and quantities of spurdog caught from Mar. – May 2014. 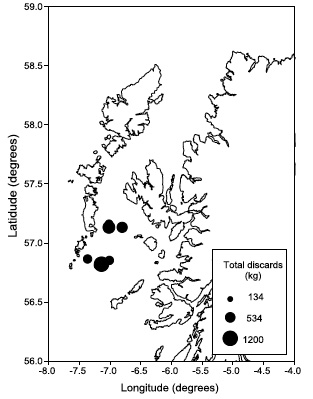 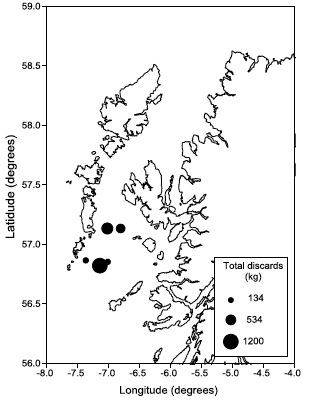 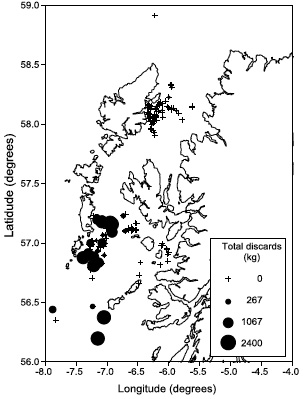 The total quantities reported caught per vessel were very variable (Table 1). It is not clear if this reflects incomplete reporting or if by-catch levels were really lower in the North Minch compared with the Sea of Hebrides. However, of the two vessels which filled in logsheets fully (including details of tows with zero spurdog catches in winter 2014/2015), one was fishing in the north and one in the south.

Table 1: Total reported spurdog bycatch in tonnes based on logsheets returned to Barratlantic

Table 2: Total reported spurdog bycatch in tonnes based on e-logs returned to Marine Scotland excluding vessels which participated in returning paper logsheets (see Table 1). E-log data from winter 2014/2015 were not available at time of writing.

Sex and Size of Fish Sampled

Female fish were not found in the samples from the first winter but some were present in the spring 2014 samples. These were mainly smaller individuals (41 to 63 cm length) with a single larger pup-bearing female. Females were a little more common in samples collected during the winter 2014/2015 fishing season but still only represented <4% of the catch overall (in terms of numbers).

Table 3: Summary of fish sizes based on samples returned to Barratlantic 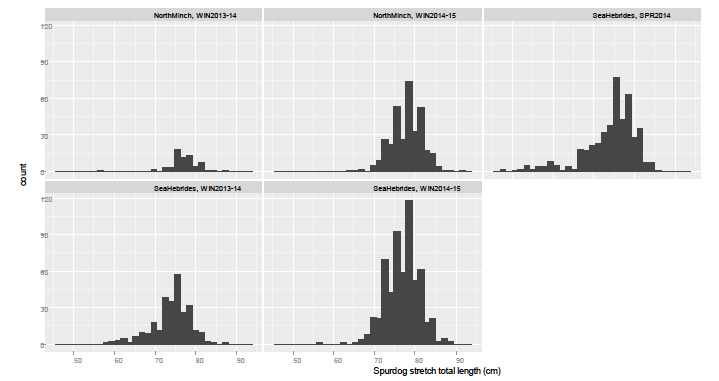 A variety of the spine markings are shown in Figure 7. Very few of the spines examined showed the clear markings (Figure 7a) illustrated in Holden and Meadows ( 1962) and which could be used to age the fish with any confidence. Nearly all of the spines also showed at least some wear at the tips. A few examples of double banding were also observed (Figure 7d). The few spines showing readable marks suggested fish might be between 3 and 8 years of age (mean 6.2, std dev. 1.4, n=31). Comparing data from the North Sea in Sosiński ( 1978) with growth estimates from the American east coast does suggest that growth rates might be higher in the eastern Atlantic. Despite this if fish from west Scotland have been aged correctly then the growth rates in the Minch and Sea of Hebrides would be considerably higher than reported from other areas, including the North Sea (Figure 8). 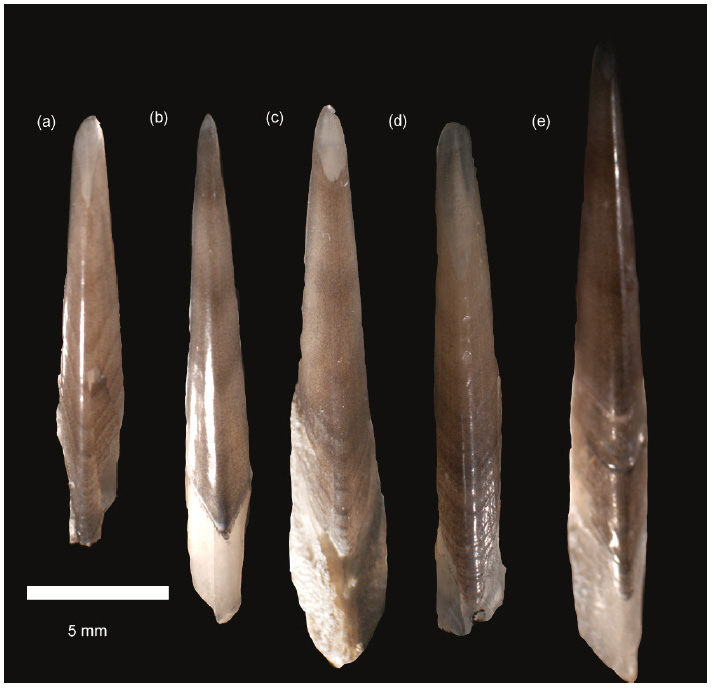 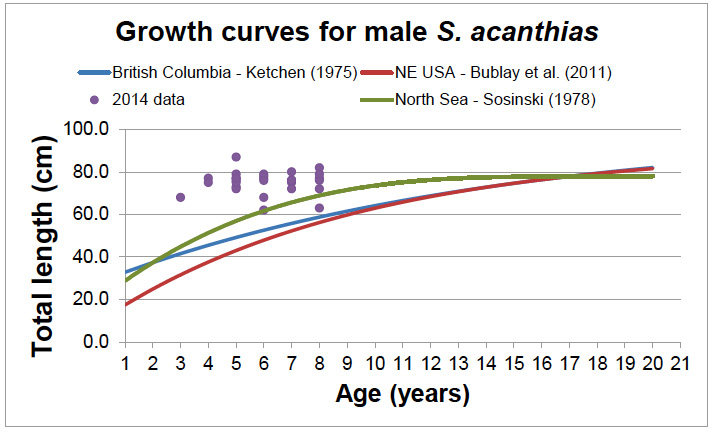