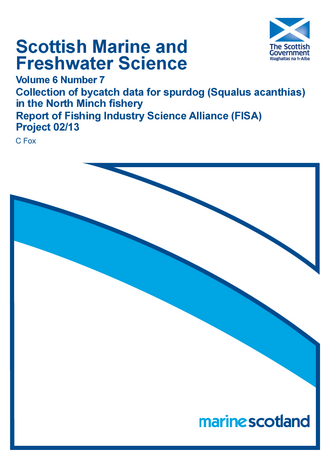 Stock assessments by ICES and others ( De Oliveira et al. 2013, ICES 2014) suggest that the north-eastern Atlantic stock is at a historically low level and in consequence a zero TAC has been set ( European Commission 2015). The project was proposed to FISA after discussion with fishers from Barra and Stornoway who fish for Nephrops in the Minches and Sea of Hebrides using single or twin-rig otter trawls. According to the fishers the majority of the spurdog caught in this area are predominantly small to medium-sized male fish. Pawson et al. ( 2009) suggested that controlled fisheries for small male spurdog ( i.e. avoiding the mature female components of the stock) might not be damaging to the stocks overall so the industry are keen to explore whether a controlled by-catch fishery could be allowed.

The fishers also stated that patches of spurdog are encountered only occasionally and are hard to avoid (that is they do not occur in predictable locations). Prior to the zero TAC being introduced, spurdog represented a small but valuable by-catch for the Nephrops trawl sector fishing around the western Isles at certain times of the year. Because the spurdog entangle the nets the fishers state that they would normally move away from the area and try to avoid such encounters but they do object to having to discard a saleable product when it is accidentally caught. A further important issue is that under the new ‘landings obligation’, spurdog could act as a choke species for the Nephrops fisheries.

Discussions with the fishers elicited a range of opinions on whether discarded spurdog survive. A literature search suggested that there have not been any specific scientific studies on the survival of spurdog after capture in Nephrops trawls. Post-trawl survival has been examined on the east coast of the USA but the tow durations, less than 90 minutes, were relatively short compared with typical tow lengths in the west of Scotland Nephrops fisheries ( Mandelman & Farrington 2007, Rulifson 2007).

The aims of the present project were to collect new data on the levels of spurdog by-catch, locations of by-catch and to collect biological information in terms of the sizes and sex of the fish caught in order to inform the debate on whether a controlled incidental by-catch ( i.e. not targeted) fishery could be considered. The project was funded to run over the winters of 2013/14 and 2014/15. Because not all the available budget for sampling in 2013/2014 was spent, sampling was extended to cover the spring and summer 2014.

A methodology was designed, discussed and agreed with industry representatives and Marine Scotland Science ( Appendix I ). A number of vessels fishing from Barra and Stornoway volunteered to take part in collecting samples and recording their by-catches, additional vessels agreed to make records of spurdog discards available from their electronic landings returns.

A kick-off meeting was held in Stornoway on 5 th Nov 2013 with representatives from Western Isles Council, Barratlantic, Islander Shellfish and the skipper of Astra III where the methodology was agreed. Following this meeting derogations for landing spurdog for scientific purposes were requested for the vessels, methodology instructions and logsheets were sent to participating skippers via Barratlantic and Islander Shellfish to be passed on to the vessels.

The winter of 2013/14 had a run of severe gales which disrupted fishing but samples were returned from three of the participating vessels, Astra III, Brighter Morn and Cheerful. These were measured 17-18 th Feb 2014. Spines were also taken from a sub-set of the fish to see if they could be used to age the fish following Ketchen ( 1975), Holden and Meadows ( 1962), McFarlane and King ( 2009) and Bubley et al. ( 2011).

Some problems were encountered during the first season of sampling. The labels supplied to identify the fish boxes proved inadequate during freezer storage so that a number of the samples could not be matched back to the returned log-sheets. However, sufficient samples were identifiable to provide useful information. One of the vessels did not return log-sheets with the samples although their date of capture and location were provided verbally. None of the vessels provided details of tows where dogfish were not caught although this had been requested.

Overall 17 samples comprising around 40-50 fish per sample were returned to Barratlantic. Lengths were measured for 345 fish, all of which were males. No female spurdog were found in these samples. The sizes of the fish were very consistent with an overall mean of 77.1 +/- 4.0 cm (mean +/- standard deviation) for the North Minch and 73.9 +/- 4.8 cm from Sea of Hebrides.

An attempt was made to age these fish based on marks on the spines. The number of spines with markings considered to be readable was very low (31 out of 300 examined) and there was considerable variation in the spine mark patterns. A tentative ageing was made suggesting the average age of the fish sampled was around 6 years. However, this implies a higher growth rate than reported for other areas. The most likely reason for this discrepancy was under-ageing. Because age determination from spines did not appear very reliable for fish from the west of Scotland, vertebrae were also collected from subsequent samples.

Un-spent funds allowed sampling to continue during spring 2014. Overall seven sets of samples were returned from a single vessel participating in the scheme comprising around 50 to 70 fish per sample. Lengths of 517 fish were recorded of which 87% were males, 13% were small females and a single larger female (102 cm SL) with pups. The sizes of the male fish were 74.0 +/- 6.6 cm (mean +/- standard deviation). One sample contained a higher proportion of small immature females and a few similar sized fish were recorded in other samples (mean size 52.6 +/- 4.8 cm.

Some problems with sample collection persisted despite efforts to rectify them. Labelling of boxes in a manner which would survive freezing and handling remained an issue. None of the participating vessels provided details of tows where dogfish were not caught although this had been requested.

A meeting was held with the Western Isles Fishermen’s Association at Stornoway on 29 th Nov 2014 to report on the findings of the project to date and to discuss the problems encountered (this was originally planned for 9 th Nov but had to be deferred the original meeting was still held to discuss other issues and it was emphasised by the chair (Duncan Macinnes) that all skippers should fill in details of any spurdog discarded using the e-logs). Following the meeting of the 29 th, new sampling instructions, paper logsheets and plastic fish-box tags were distributed to all vessels who had indicated a willingness to participate in sample collection.

A number of samples of spurdog caught during the summer had been returned to Barratlantic and had been defrosted in anticipation of a measuring visit from Clive Fox on 10 th & 11 th November. Regrettably this had to be cancelled due to a vehicle breakdown close to Ullapool. It was not possible to re-arrange the visit quickly because of few alternate ferry sailings and these samples had to be dumped but anecdotal evidence suggests they contained quite a high proportion of small fish.

During winter 2014/2015 vessels Cheerful, Joanna, Sheigra and Heather Isle all returned samples to Barratlantic (Nordic Way returned one sample but the vessel then withdrew from the project following engine problems). Detailed logsheets were received from two of these vessels including information on tows where spurdog were not caught, other vessels only provided details of tows where spurdog were caught. A site visit to Barra was conducted from 14 th – 19 th February and 980 fish were measured and sexed. Of these 96.2% were males, 3.6% were females and 0.2% were females with pups. The sizes of the male fish were 77.9 +/- 4.0 cm (mean +/- standard deviation) from the North Minch and 76.9 +/- 4.2 cm from Sea of Hebrides. Samples of spines and vertebrae were also taken for future age determination.

As mentioned above, only two vessels returned full details of their fishing including tows where spurdog were not caught. Extraction of e-log records also showed very small catches of spurdog being recorded. The lack of detailed reporting of spurdog discards by a larger number of vessels makes it difficult to say how typical the detailed reports from two vessels are of the wider fleet. This in turn makes it difficult to estimate the potential economic losses being incurred. However, based on the limited data available it was estimated that economic losses could be up to £40,000 per vessel in the Sea of Hebrides but appear to be much lower for vessels operating in the North Minch. Recording of spurdog discard rates was also recommended when the North Minch Nephrops trawl fisheries applied for Marine Stewardship certification. A certain amount of work was undertaken in 2008 to 2010 in association with that application although full certification was not pursued ( Milligan et al. 2013). Lengths of 100 spurdog were recorded and are largely in agreement with values reported here (winter samples being dominated by males of 60-70 cm with smaller males and some females being more common in the summer). Some fish were also aged using spines and ages estimated to be somewhat higher than in this report – again the authors emphasised the great uncertainty in age determination using this method and recommended that inter-calibration work be undertaken before these results were accepted. It is not clear whether the Young’s Trace System mentioned in Milligan et al. ( 2013) is still being used and whether spurdog by-catch has been recorded but this should be explored in view of the difficulties in estimating the total amounts of spurdog being discarded in this Nephrops fishery.

Estimates of the overall levels of spurdog discarding thus still remain somewhat uncertain but may be up to a few tens of tonnes per vessel per annum in the Sea of Hebrides. Discard levels appear to be much lower in the North Minch although the relative rates may be influenced by gear as single rig rather than twin rig gear was being used in that area. Furthermore the survival rates of spurdog caught in Nephrops tows, which can last up to 5 hours, appear to be unknown. These two areas of uncertainty will probably need to be addressed if options for a limited by-catch fishery are to be pursued further.

Overall the project established a good working relationship with a number of vessels operating in the Minch and Sea of Hebrides, has generated new biological data on the sizes and sex ratios of the spurdog being discarded, has generated some new estimates of discarding rates and has collected samples of spines and vertebrae which can be used to test age determination in future.