Foreword from the First Minister 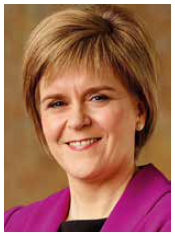 With less than six months to go before the UK is due to leave the European Union, time is running out to secure both an agreement on the terms of withdrawal and a political declaration that provides clarity on the future relationship.

The EU has been clear that the key economic planks of the UK Government's Chequers proposal are not acceptable.

The priority now is therefore to avoid the damage of either a no-deal Brexit or a blindfold deal, in which the UK leaves with no detail or guarantees on the future relationship. Any of these outcomes will be disastrous for jobs and living standards.

The Scottish Government, in line with the overwhelming vote for Remain in Scotland, supports continued EU Membership. Remaining in the EU continues to be our strong preference. Nevertheless in December 2016 we set out a compromise plan to keep Scotland and the UK in the European Single Market and Customs Union to limit the damage of Brexit as much as possible.

It is therefore simply incorrect for the Prime Minister to say that there is no alternative to Chequers. In fact, the UK Government's position is increasingly absurd - insisting on pursuing proposals they have been told will not work, while rejecting a plan that will.

With crucial decisions coming up over the next few weeks and months at EU level - and in the House of Commons where the UK Government must seek the approval of the UK Parliament - it is vital to break
the impasse. This document sets out how that can
be done.

A commitment to maintain membership of the European Single Market and Customs Union would secure both a withdrawal agreement and provide the clarity needed on the future relationship.

This paper sets out why the Chequers proposal will not work, details recent independent analysis of the UK Government's proposals and sets out why a no-deal or a blindfold deal will be so damaging.

For the Prime Minister and the UK Government it is time to face reality. For MPs at Westminster it is time to come together in a common-sense coalition to minimise the Brexit damage.

There is no reason why this proposal cannot be accepted quickly, but if more time is needed to avoid a no-deal Brexit or blindfold Brexit crisis then the UK Government should ask for an extension to the Article 50 process. The Scottish Government has made clear it would support another EU referendum, although it's not clear how it would guarantee that Scotland would not, yet again, face exit against our will. However for those arguing for another EU referendum, an extension of Article 50 would allow the necessary time for it to be legislated for.

The Scottish Government, as ever, stands ready to do everything we can to bring about an end to what has been an unfolding Brexit disaster and to join with others to protect Scotland's place in Europe.