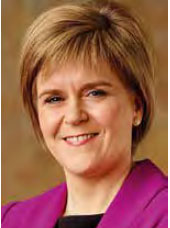 In the next few weeks talks will start on the future relationship between the EU and UK.

The outcome of those talks will have a major impact on economic and job prospects for current and future generations.

People in Scotland voted decisively to remain in the European Union and we continue to believe that this is the best option for Scotland and the UK as a whole. However, short of EU membership, the Scottish Government believes the UK and Scotland must stay inside the Single Market and Customs Union.

The European Single Market is the largest and most lucrative in the world.

Securing our position in that market is the number one priority for the Scottish Government when phase two of the negotiations begin.

That means the Prime Minister must drop her “red lines” over free movement of people and the role of the Court of Justice of the European Union and prioritise, instead, the interests of the economy and of future generations.

It is time for the UK Government to stop deluding itself, and misleading others, about what will happen if it maintains those red lines.

The EU has made it clear that in those circumstances the only possibilities are a basic free trade deal (often called a “Canada” type deal with perhaps some limited add-ons) or reverting to trade on World Trade Organization ( WTO) terms. The EU has set out these options as illustrated by the graphic below.

Membership Of The European Single Market Provides Scotland’s Businesses With Unrestricted Access To A Market Of Over 510 Million People.

All of Scotland’s future population increase over the next decade and beyond is projected to come from people choosing to come to Scotland to make this country their home.

A very real risk from the UK Government’s hard Brexit approach is that Scotland’s working population will fall. That means the number of people working and paying taxes to support the NHS and other public services that we all rely on will also fall.

That, in turn, will mean an increased burden on young people and fewer opportunities for this and future generations.

The damage will not only be economic, serious as this is, but will also compromise current safeguards in a range of vital policy areas currently driven at the EU level such as rights and protections in areas like the environment, workers’ rights and justice and home affairs co-operation where we derive considerable benefit.

From the perspective of the Scottish Government, the commitment the Prime Minister made in her Lancaster House speech to ensure that “…Ministers from each of the UK’s devolved administrations can contribute to the process of planning for our departure from the European Union” needs to be honoured, in a way that it has not been to date.

That means accepting the Scottish Government’s call to re-visit the “red lines” and re-open the case for staying in the Single Market and Customs Union.

I look forward to discussing these proposals with all those seeking to avoid an extreme Brexit in favour of a better future for Scotland, the UK and the EU.