We are a nation rightly proud of our rich heritage of entrepreneurs, innovators and creative people. Indeed, some have even argued that "Scots invented the modern world". [13]

From inventing the television, the telephone and radar to discovering penicillin and developing beta-blockers, our past achievements as a nation are significant and varied. Today, cutting-edge work such as the technology of 'tractor-beams' presently being led by the University of St Andrews, the development of the next generation of prosthetic limbs by Touch Bionics and ADL's world-leading hybrid buses, shows that the CAN DO spirit is alive and well in Scotland.

Touch Bionics was the first spin-out from the NHS to receive significant private and public sector investment, including from Archangel Informal Investments and the Scottish Co-investment Fund. Building on this support, the company launched the i-limb™ hand in 2007. This was the first powered prosthetic hand to incorporate articulating fingers. The following year it acquired US company, livingskin™, which provides the lifelike passive functional prostheses and prosthetic coverings for the i-limb™ technology.

Touch Bionics continues to innovate and lead the world in the development of upper limb prosthetic technologies. This year the company introduced the latest generation of advanced prosthetic technology, i-limb™ ultra revolution, a myoelectric prosthesis with powered rotating thumb and a mobile app allowing the user to program and control features whilst on the move.

"Without the advice and funding secured through Business Gateway and Highlands and Islands Enterprise I wouldn't have been able to get so far. My plan now is to source further investment that will allow me to expand into additional units and massively increase production." Natalie Crayton

Alongside our nation's inventiveness we celebrate the great men and women whose entrepreneurial spirits have created jobs and growth, both at home and abroad. From Sir Thomas Lipton and Andrew Carnegie in the nineteenth century to Lord Haughey, Sir Tom Hunter and Ann Gloag OBE, who are working with us on the Scottish EDGE fund judging panel, Scotland's entrepreneurs are renowned not just for their business success but also their philanthropic endeavours.

We maintain a strong network of higher education institutions, five of which rank in the global top 200 universities, [14] and there is a real focus on business across our further and higher education sectors - ensuring that while we rightly celebrate our past and current successes we also pave the way for future ones.

Natalie Crayton launched Hebridean Sea Salt, based in South Lochs, in 2010 after spotting a gap in the market for Scottish sea salt. Thanks to funding advice secured through Business Gateway, Natalie, who studied marine biology, was able to build her own unique production unit manufacturing 600 packs of salt a week.

Now, with increasing demand for her crunchy sea salt made using the unpolluted water off the Isle of Lewis, she hopes to secure further investment to allow her to eventually produce up to 1,000 packets a day. 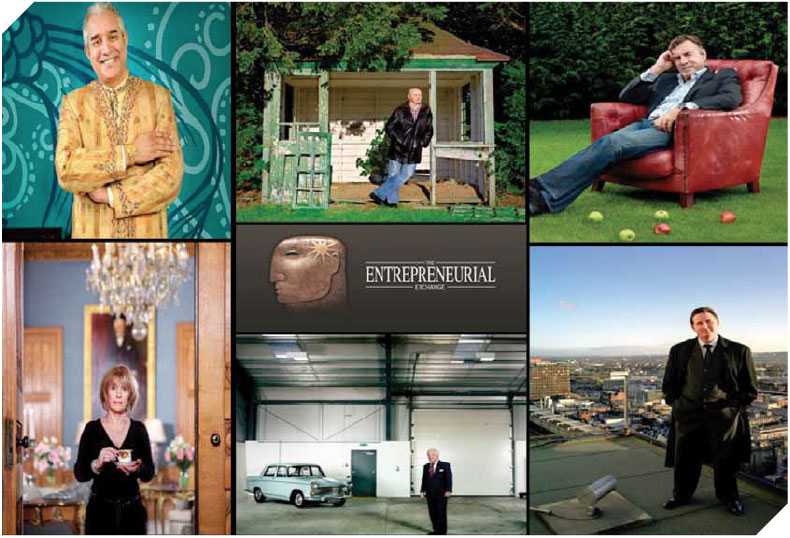 There are a number of positive signs emerging which indicate that Scotland is already moving forward in achieving greater entrepreneurship and innovation:

All signs that point to a new entrepreneurial and innovative spirit alive in Scotland.

Since it was founded in 2009 by Ali Smeaton, his brother Fraser and friend Gregor Lawson, Morphsuits [19] has grown to a £12 million turnover business. The company now employs 23 people in their offices in Edinburgh and London and have recently acquired a business in California, USA.

Morphsuits are full body suits made from polyester and spandex to make them super stretchy. The three founders initially targeted 10,000 Facebook fans in the hope that it might pay for a skiing holiday. However, they achieved that in a matter of weeks and now have over 1.3 million social media followers.

Their advice to budding entrepreneurs is as follows:

" Do test your idea quickly and cheaply:

Morphsuits was our third idea. Despite our research, planning and passion for the previous ideas we just couldn't get them off the ground. However, because we had launched them for little money it meant that all we lost was our time and in return we got a lot of learning that proved very useful with our following ideas.

"Too many people think that their idea is so special that if they tell anyone it will be copied. Don't believe it. The chances of your idea being stolen are tiny and you will miss out on loads of valuable feedback and introductions."

Do continue to keep your job until your concept is proven:

We kept our jobs for 18 months after launching Morphsuits and while it was very hard work it meant that we could reinvest all our profits in growth because we could live off our salaries. Just make sure your new venture isn't competing with your day job!

This does two brilliant things for a start-up: 1. It means you can keep your costs variable so you can scale up and down with demand; 2. You can bring in experts in all areas of the business. At Morphsuits we outsource absolutely everything other than actually running the business.

Too many people think that their idea is so special that if they tell anyone it will be copied. Don't believe it. The chances of your idea being stolen are tiny and you will miss out on loads of valuable feedback and introductions. At Morphsuits we talk to as many people as possible and through that we have found our manufacturers, our logistics firm and many more innovations. Start a little black book.

Don't wait until everything is 100% perfect before getting going:

If you wait until everything is perfect you will never launch because nothing is ever perfect. When you launch, your customers will forgive a few imperfections and you will have started learning and earning money.

Don't start something you don't know how to monetise:

We all hear about Twitter and Facebook who drive huge valuations before generating any revenue. Don't be misled; this only works for a few Silicon Valley venture capital backed businesses. Having a business that generates revenues from day one keeps you motivated and provides capital to finance growth."

Understanding our Challenges
Our Values and Approach