4.1 Pay proposals will be assessed using a risk-based approach to the pay remit process. Based on some key indicators, each public body will be assigned to one of three remit process. The following chart summarises the 2019-20 risk assessment process: 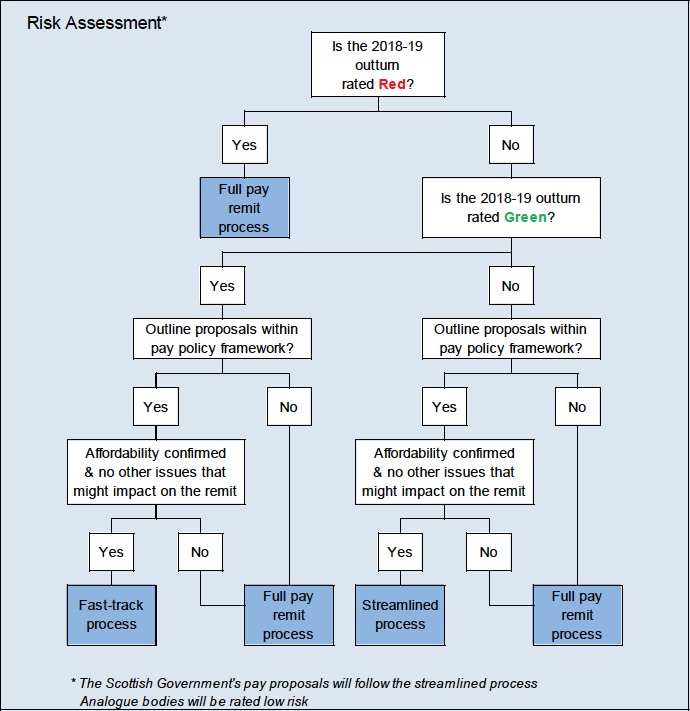 4.2 The Finance Pay Policy Team, and where relevant in conjunction with the Sponsor Team, will determine the risk rating of each public body based on their 2018-19 outturn; 2019-20 baseline paybill information and outline proposals.

What should a public body provide for the risk assessment of their draft pay proposals?

4.5 All public bodies will be required to complete an assessment proforma in which they are asked to provide: 2018-19 Outturn information; the 2019-20 baseline position; indicative costs for progression and savings; as well as a brief outline of their pay proposals, in particular details of any changes proposed to existing pay and grading structures or terms and conditions to address pay inequalities.

4.6 The sponsor division and Finance Pay Policy team will comment on the proposals. It will be the responsibility of the sponsor division to highlight any issues or affordability pressures and along with the Finance Business Partner approve the optimum funding envelope. The Finance Pay Policy team will advise on the risk rating of the proposals and provide guidance to ensure they remain in line with pay policy. This will then provide the framework for public bodies to engage in scoping discussions or pay negotiations with their Trade Unions.

How will the outturn be assessed?

4.7 The previous year's outturn information is required be provided as part of the current year's pay proposals. As noted in paragraph 2.6, it is the responsibility of the Chief Executive or Accounting Officer to confirm the outturn is within the approved remit and the assumptions made in respect of savings to fund the pay award were met.

4.8 The Finance Pay Policy team will rate the outturn for the previous year as follows:

Green
The outturn will be rated as Green if all of the following apply:
a) the settlement information for 2018-19 has been provided and confirms the pay award was implemented within the approved remit.
b) the outturn is fully in line with the approved remit (it did not exceed the limits of the approved remit; all changes to pay structures were implemented as approved; all conditions placed on approval had been met; and where appropriate, all assumptions about paybill savings are still valid) and this has been confirmed by the Chief Executive.
c) any paybill changes are attributable to factors not directly related to the approved remit.

Amber
The outturn will be rated as Amber if any of the following apply:
a) the settlement information for 2018-19 has not been provided.
b) the outturn exceeded the approved limits and there is insufficient information to determine that any other paybill changes are attributable to factors not directly
related to the approved remit and the increase in paybill per head indicates proposals were implemented as approved.
c) the savings identified in the approved remit have not been fully realised but were sufficient to cover the costs of implementing any changes to address inequalities.

4.9 If the outturn is rated as Red, the public body must provide an explanation as to why the outturn was exceeded and the current remit and outturn must be considered by the Remuneration Group.

4.10 Where a public body has exceeded the approved remit and the increase cannot be explained by changes in staffing over the year or has moved away materially from the basis of that remit then the Remuneration Group may refer the outturn and the current remit proposals to Ministers. The Remuneration Group expect Ministers will take action where the explanation is not adequate. The potential consequences of significantly exceeding a remit in such circumstances are set out in paragraphs 6.3 to 6.5.

What is required under the fast-track process?

4.11 Where a public body has been assigned the fast-track process then the pay remit would be signed off by their Board or Remuneration Committee and they would only be required to submit a settlement proforma once the pay award has been implemented.

What is required under the streamlined process?

4.12 Where a public body has been assigned to the streamlined process they would be required to obtain approval to their pay remit proposals prior to concluding pay negotiations and implementing their pay settlement. The pay remit proposals will be rated as set out in paragraph 4.17 and this will determine who approves the pay remit (paragraphs 4.19 to 4.26).

What is required under the full pay remit process?

4.13 Where a public body has been assigned to the full pay remit process they would be required to submit their full pay proposals for approval prior to engaging in formal pay negotiations following the process set out in paragraphs 4.16 to 4.33 below.

Who is required to submit a settlement proforma?

4.14 All public bodies are required to complete a settlement proforma to confirm that the implemented settlement is wholly in line with pay policy. This confirmation will form an important part of the process to determine the risk rating for 2020-21 (see paragraph 3.3).

What should a public body do before it submits full remit proposals?

4.15 Public bodies are encouraged to use the checklist in the costings proforma to make sure they have included all of the information necessary for their remit to be assessed fully and rated. If a public body has any questions or wants to clarify anything they should speak to the Finance Pay Policy team at the earliest opportunity. The team is happy to have early discussions with each public body on any issues arising during their preparation stages and before they submit their remit.

4.16 For a flow chart setting out all the steps of the full remit process see Annex C.

How will a pay remit proposal be assessed where Approval is required?

4.17 The Finance Pay Policy team assesses all pay proposals against the policy and will provide a rating for the current pay remit proposals as follows:

Green
The proposals will be rated as Green if all of the following apply:
a) they fully meet the requirements for the 2019-20 public sector pay policy.
b) the public body has provided confirmation of affordability and this is supported (where appropriate) by the sponsor team / finance business partner.
c) they are fully supported by a robust business case.

Amber
The proposals will be rated as Amber if either of the following apply:
a) they are not fully in line with 2019-20 public sector pay policy.
b) they propose changes to existing pay and reward systems or terms and conditions.

Red
The proposals will be rated Red if any of the following apply:
a) they do not address the low pay measures set out in the 2019-20 pay policy.
b) they exceed the cap for increase in basic award.
c) the cost of the additional flexibilities exceeds the cap and/or insufficient evidence of inequalities has been provided to support the proposed changes.
d) they include non-consolidated performance payments.
e) they are not confirmed as affordable and sustainable by the public body and supported (where appropriate) by the sponsor team / finance business partner.
f) they do not clearly set out how they will be funded.
g) they do not include the costs of all proposed increases in pay and benefits.
h) they do not set out how the public body intends to resolve an existing contractual or legal commitment to pay elements of the pay award or the timeframe involved to resolve the issue.

Who approves the pay remit proposals?

4.19 Ministers have decided some remits may be delegated to be approved by the Scottish Government's Remuneration Group or senior officials depending upon their rating.

4.20 Senior officials may approve proposals where the current remit is rated Green and the outturn is rated either Amber or Green. All other proposals will be considered by the Remuneration Group who will decide whether they can be approved or need to be brought to the attention of Ministers. This is summarised in the following table:

4.21 Who approves the remit at senior official level will depend upon whether the public body is a NDPB / Public Corporation, Agency or Associated Department:

4.22 Senior officials will consider the proposals and on the basis of the information provided will decide whether to approve the proposals or to seek further information or to refer them to Remuneration Group.

4.23 All proposals that require Remuneration Group consideration need to have the support of the relevant portfolio senior official.

4.24 The Remuneration Group will consider the proposals, which will include the Chief Executive's foreword to the business case, the advice from the sponsor team (where applicable), the Finance Business Partner (where applicable), the Finance Pay Policy team and the views of the portfolio senior official. On the basis of this information, the Remuneration Group will decide whether to approve the proposals or to seek further information or to refer them to Ministers.

4.25 Examples of proposals that may be referred to Ministers include those where the outturn is rated as red and the Remuneration Group consider the supporting explanation to be inadequate; or where the current remit is novel or contentious; or where the remit is of particular interest to Ministers. Each decision will be made on a case-by-case basis but the Remuneration Group expects to approve most proposals under the delegated approval arrangements. If Ministerial approval is required it will be the approval of the Deputy First Minister and the relevant Portfolio Cabinet Secretary or Minister.

4.26 The pay remit proposals for the Scottish Government's main bargaining unit require to be approved by Ministers regardless of its rating.

How long will approval take?

4.27 If a public body submits its pay proposals to the Finance Pay Policy team in line with their agreed submission date then they will be given priority.

4.28 The following flow chart summarises the expected length of time which will be taken at each stage of the process:

4.29 Where a public body is required to submit a full pay remit the aim will be to approve these pay remit proposals within 7 weeks:

4.30 Remit proposals that are straightforward and can be approved at senior official level should take less than 7 weeks to approve. Proposals that are more complex may take more time to resolve and where the Finance Pay Policy team considers this might be the case they will make it clear from the outset. Please note that if the proposals require to be approved by Ministers then this may take a little longer.

How will public bodies be notified of the outcome of the approval process?

4.33 After senior officials, Remuneration Group or Ministers have considered the pay proposals; a letter will be issued to the public body setting out the decision made and where appropriate any requirements or conditions made in respect of that decision. The public body can, if it wishes, request a meeting with Scottish Government officials to discuss the submission and the subsequent decision made.