5 The Context of the Pilot Plan

5.1 Overview of the Relationship with other plans, programmes or strategies

5.1.1 The 2005 Act requires that an outline of the relationships between the proposed Plan and other relevant PPS be included in the SEA Environmental Report. In terms of this SA, this process enables key environmental protection and socio-economic objectives to be identified and taken into account during the assessment process. The interactions with the draft Pilot Plan and the various other PPS in place or in development at the international, UK and national levels are discussed in the following sections.

5.2.1 The legislative and management framework for the marine environment is established in Scotland by the Marine (Scotland) Act 2010 (the 2010 Act). The 2010 Act builds on the vision established by Marine Scotland which used the UK vision as a starting point.

5.2.3 The 2010 Act allows for a system of regional marine planning to be developed for Scottish waters. The regional plans will be directed by the objectives and policies of the NMP [7] and will draw on existing work undertaken as part of the Scottish Sustainable Marine Environment Initiative ( SSMEI) [8] . The SSMEI comprised a series of local marine planning pilot projects, undertaken with the aim of gaining a greater understanding of the nature, value, and management needs of Scotland’s marine environment. As such, in the context of the PFOW area, the development of the Orkney and North Coast regional plans will draw upon this work and that of the development of the Pilot Plan.

5.3 Other PPS at the National and Regional Levels

5.3.1 Figure 5.1 illustrates the relationships between the draft Pilot Plan and other marine planning documents in Scotland, including the statutory NMP, the underlying Regional Marine Plans set out in the provisions of the 2010 Act and the Sectoral Plans such as that for Offshore Renewable Energy in Scottish Waters [9] . Other non-statutory documents and data sources such as the RLG developed to accompany the draft Pilot Plan, building upon the work of Scotland’s Marine Atlas [10] , Offshore Wind Wave and Tidal RLG [11] and supporting sources such as National Marine Plan Interactive ( NMPi) [12] , that, while non-statutory, are also likely to help to inform and support the management of Scotland’s marine environment. As noted in Section 5.2, its development also builds on other marine spatial planning initiatives such as the SSMEI, which facilitated the development of marine plans for Shetland, Firth of Clyde, Sound of Mull and the Berwickshire coast.

5.3.2 In this vein, it is anticipated that the non-statutory Pilot Plan will provide guidance for the subsequent development of statutory Marine Regional Plans for Orkney and the North Coast regions (see Figure 5.1). Prior to the development of these statutory plans, the process of development for the draft Pilot Plan has allowed the methodology for regional marine planning to be developed in the PFOW area, and should enable the development of the two regional plans to build on the consultation process and the lessons learned through this process.

5.3.3 In addition, marine planning sits alongside terrestrial planning policy and other planning and regulatory regimes, which together, work to manage sustainable development and use of the coastal and marine environment.

5.4.1 In 2011, the UK Government and the devolved administrations prepared a joint Marine Policy Statement ( MPS) [13] . This Statement provided the framework for preparing Marine Plans and for decision-making in relation to the marine environment, and established policies and objectives for specific sectors and activities. It built upon the UK vision for clean, healthy, safe, productive and biologically diverse oceans and seas and the ‘High Level Objectives’ for the marine environment agreed amongst the four UK administrations [14] to fulfil this vision.

Figure 5.1 The context of the Pilot Pentland Firth and Orkney Waters Marine Spatial Plan in relation to other legislation. 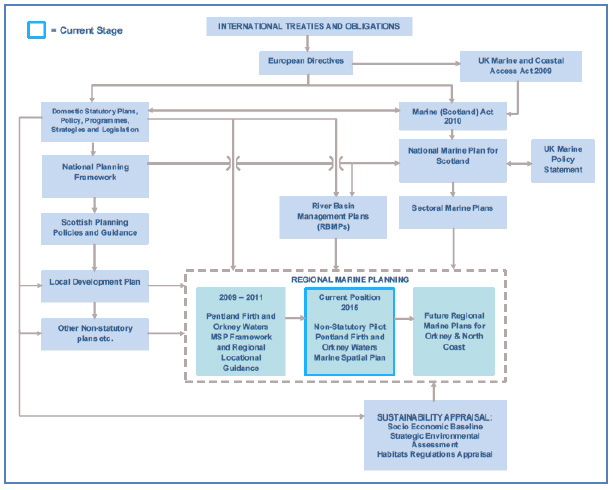 5.5 At the European level

5.5.1 The Marine Strategy Framework Directive ( MSFD) [15] requires Member States to put measures in place to achieve or maintain good environmental status by 2020 through application of an ecosystem approach to marine management. Member States were required to report on their initial assessment of their seas and to determine good environmental status and associated targets and indicators by 2012.

5.5.2 The Directive is transposed into UK legislation by the Marine Strategy Regulations 2010 [16] . At the UK level, the Marine and Coastal Access Act 2009 requires marine plans to be prepared for the UK marine area (0 – 200 nautical miles).

5.5.3 In July 2014, the European Parliament and Council adopted legislation to create a common framework for maritime spatial planning in Europe [17] . While member states remain free to plan their own maritime activities, the Directive sets minimum common requirements for local, regional and national planning in shared seas. This is aimed at reducing conflicts and creating synergies between sectors, encouraging investment, increasing co-ordination and cross-border co-operation, and protecting the environment through the early identification of impacts and opportunities for multiple use of space [18] . The NMP was prepared in accordance with the Directive [19] .

5.6 At the International level

5.6.1 The United Nations Convention of the Law of the Sea ( UNCLOS) [20] establishes the right of coastal nations to set laws and regulate the use of their marine areas out to 12 nautical miles. The Convention also establishes exclusive economic zones from 12 – 200 nautical miles from the coast and establishes rules or provisions for shipping and transit passage, development of resources, and the conservation and management of the living resources of the high seas, amongst others.

5.7.1 There are a significant number of policy and legislative drivers at the national, European and international levels that apply to the various sectors which use the marine environment including transport, shipping, fishing, energy and renewable energy. The requirements of these drivers, including that of the International Maritime Organization ( IMO) that regulates shipping, for example, have been taken into account in the Draft Pilot Plan’s preparation.