F.1.1 The HRA process initially requires an appraisal of whether the components of the Pilot Plan will result in likely significant effects ( LSE) on European Sites; those sites designated under the European Habitats or Birds Directives as Special Areas for Conservation ( SACs) or Special Protection Areas ( SPAs). If it is determined that LSE on a European site may occur then the Pilot Plan will be subject to an 'appropriate assessment' ( AA) of its implications for European sites, in view of these site's conservation objectives.

F.1.2 This Appendix of this Report has been prepared as a Draft HRA Record, setting out the proposed methodology for the appraisal process of the Pilot Plan, the steps undertaken to consider the draft Pilot Plan, and discussion on the initial findings at this early stage of the HRA process. This HRA has been undertaken using guidance provided by the Scottish Government [1] and Scottish Natural Heritage ( SNH) [2] which details advice on the steps and process to be followed in undertaking plan-level HRA.

F.2.1 Article 6(3) of the Habitats Directive [3] requires that any plan or project which is not directly connected with or necessary to the management of a European/Ramsar site (also known as a Natura 2000 site), but likely to have a significant effect thereon, either individually or in combination with other plans or projects, shall be subject to an ‘appropriate assessment’ of its implications for the Natura site, in light of the site’s conservation objectives.

F.2.2 Natura 2000 is an EU-wide network of nature protection areas established under the Habitats Directive, with the aim of conserving Europe's most valuable and threatened species and habitats and was developed to work towards their long-term survival. The network is comprised of Special Areas of Conservation ( SACs) designated by Member States under the Habitats Directive, and also incorporates Special Protection Areas ( SPAs) which are designated under the 1979 Birds Directive [4] . In addition, it is a matter of law that candidate SACs ( cSACs) and Sites of Community Interest ( SCI) are considered as if they were designated, and that proposed SACs ( pSACs) and proposed SPAs ( pSPAs) are considered as if they were designated. Whilst not currently a legal requirement for consideration in HRA, the draft marine SPAs published in July 2014 [5] are expected to be issued for formal consultation in 2015. However, in the context of this HRA, these areas will also be considered as if they have been designated.

F.2.3 The Directive adds that the competent authority shall agree to the plan only after having ascertained that it will not adversely affect the integrity of the site concerned, unless in exceptional circumstances the provisions of Article 6(4) are met. This procedure is applied in Scotland through the Conservation (Natural Habitats, &c.) Regulations 1994 (as amended) [6] .

F.3 Approach to the HRA

F.3.1 As illustrated in Figure F.1, a six-step approach was developed for undertaking the HRA on the Pilot Plan, broadly reflecting the 13 stage methodology of the HRA process advocated in the SNH Guidance. This process was developed to simplify the process and customise the process to the Pilot Plan and its policies while still reflecting the requirements of the Directive and the methodology in the SNH Guidance.

F.3.2 It is noted that at this stage, the Pilot Plan and its policies are in a draft and will be subject to public consultation. As a consequence, there is the potential for changes to the Pilot Plan and/or its policies, including changes to the focus and scope of specific policies and the potential for the development of new policies for inclusion in the final Plan. As a consequence of undertaking the HRA on the draft policies and based upon the initial findings of the HRA (set out in Section F.4), only the first four steps of this process have been completed.

Figure F.1 The process for undertaking the HRA of the Pilot Plan [7] 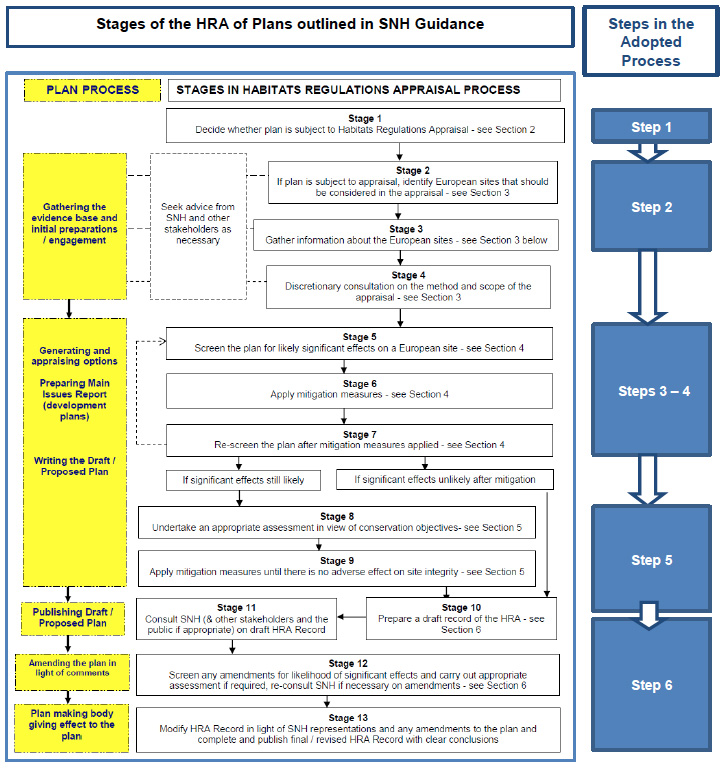 Step 1: Decide if an HRA is required

F.4.1 The initial step of the HRA process involved reviewing the draft Pilot Plan to determine if an HRA was required. This step involved comparing the Plan against criteria set out in Section 2 of the SNH Guidance. As shown in Figure F.2, this review concluded that while the Pilot Plan will not be directly connected with or necessary to the management of a European site for nature conservation purposes, nor is it identified by regulations 85A or 69A, it will provide a framework for deciding applications and influencing decision-makers, as a result of being a material consideration in licencing decisions.

F.4.2 As a consequence, Marine Scotland considers that the plan should be subject to HRA.

F.4.3 The second step of the HRA process involved identifying European sites that should be considered in the screening of the Pilot Plan. This step involved researching the sites and qualifying interests that could be subject to LSE from the Pilot Plan.

F.4.4 An initial list of sites to be screened has been compiled and this is presented in Annex F1. At this stage of the process, and given the proposed strategic focus of the Pilot Plan, a review of these sites is useful to aid the consideration of potential impact pathways in the next step of the process; however, depending on the findings of this screening, a more detailed analysis and appraisal of these sites may be required.

Steps 3 – 4: Impact pathways review and identification of activities to which qualifying features are sensitive, and Activity-based screening of European/Ramsar Sites

F.4.5 The next two steps of the process involved the identification of impact pathways associated with the draft Pilot Plan and the general and sectoral policies contained within it. This work relied heavily on work undertaken on the SEA of the draft Pilot Plan being conducted in parallel to the HRA, and was also informed by previous SEAs and recent HRAs undertaken for the Scottish marine environment; notably the Sectoral Marine Plans for Offshore Renewables, the National Marine Plan ( NMP), Marine Protected Areas ( MPAs) [8] , amongst others. For example, these assessments informed the consideration of known pathways and known likely distances for movement of Natura qualifying species.

F.4.6 From this, the following potential impact pathways were identified:

F.4.7 In line with the SNH guidance, the Pilot Plan is required to undergo screening with the purpose to:

“a) Identify all aspects of the plan which would have no effect on a European site, so that they can be eliminated from further consideration in respect of this and other plans;

b) identify all aspects of the plan which would not be likely to have a significant effect on a European site (i.e. would have some effect but minor residual), either alone or in combination with other aspects of the same plan or other plans or projects, which therefore do not require ‘appropriate assessment’; and

c) identify those aspects of the plan where it is not possible to rule out the risk of significant effects on a European site, either alone or in combination with other plans or projects. This provides a clear scope for the parts of the plan that will require appropriate assessment.” [9]

F.4.8 After identifying the relevant impact pathways, a review of the activities detailed in the Pilot Plan and its general and sectoral policies was undertaken. This involved undertaking a Screening of the Plan and its policies ‘alone’ as outlined in Appendix C of SNH Guidance [10] . This screening process focused on General Policies 1 – 9 and Sectoral Policies 1 – 10 contained within the draft Pilot Plan, to consider the potential for effects on European sites from each.

F.4.9 The findings of the Screening are presented in Table F.1 and summarised in Section F.5.

Figure F.2 Deciding if a plan should be subject to HRA [11] 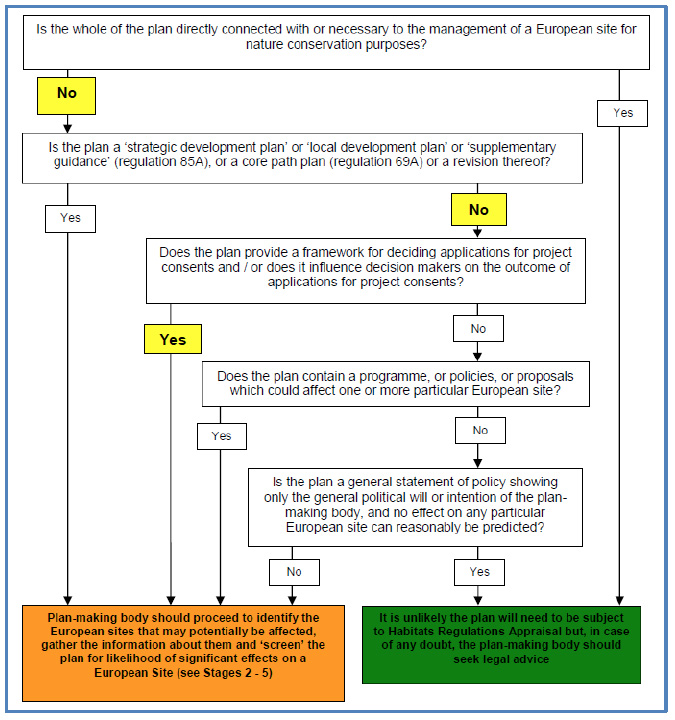 Table F.1 Screening of the General and Sectoral Policies for the likelihood of a significant effect on European Sites identified in the HRA [12]

Steps 5 – 6: Detailed pathway-feature sensitivity review and Assessment of the potential effects on European/Ramsar sites, and Preparation of the HRA Record

F.5.1 The general policies included in the draft Pilot Plan are safeguarding or mitigating policies. As outlined in Table F.1, they are general in direction and apply to all activities and development in the PFOW marine environment. In consequence, no connectivity or direct pathway for impact has been identified between these policies and specific European sites; and as such, none of the general policies are considered to have a LSE on a specific European site.

F.5.2 As presented in Table F.1, the majority of the sectoral policies in the draft Pilot Plan are also general in direction, and do not direct development or activities to a particular location, nor do they promote an action that clearly has a link or pathway to potential effects on specific European sites. As such, at this initial stage, these policies have been screened out of the process. Two of the sectoral policies (relating to aquaculture and renewable energy) were considered to reiterate existing policy and contained proposals that have been generated and assessed under other plans. As a consequence, both policies were also screened out of the assessment.

F.5.3 In conclusion, the review of both the general and sectoral policies found that the policies in the draft Pilot Plan will have no LSE on any European sites.

F.6.2 Should the findings outlined in this Draft HRA Record change, particularly if a decision is taken that an ‘Appropriate Assessment’ is required, the HRA will be progressed to Step 5 as outlined in Section F.3 (i.e. Step 5: Detailed pathway-feature sensitivity review and assessment of the potential effects on European/Ramsar sites).

F.7.1 As the draft general and sectoral policies have been ‘screened out’ at this stage of the development of the Pilot Plan due to either being general policy statements, containing aspects protecting the natural and historic environment, containing proposals that have not been generated by the Pilot Plan, or containing aspects that are general so that it is not known how they will be implemented of whether potential effects may occur to any European site, no in-combination assessment is required for the Pilot Plan at this time.

F.7.2 As noted in Section F.6, should the findings outlined in this Draft HRA Record change due to changes in the Pilot Plan and its policies, particularly if a decision is taken that an ‘Appropriate Assessment’ is required, an in-combination assessment will be undertaken.

Annex F1: Sites screened for the likelihood of a significant effect in the HRA [13], [14]