3.1 The purpose of the draft Pilot Plan

3.1.1 The draft Pilot Plan for the PFOW will set out an integrated planning policy framework to guide marine development, activities and management decisions, whilst ensuring the quality of the marine environment is protected. It is anticipated that the finalised Pilot Plan will establish a useful basis for the preparation of the two separate Regional Marine Plans for the Orkney and North Coast Scottish Marine Regions.

3.1.2 The broad aim of the non-statutory plan is to set out a coherent strategic vision, objectives and policies to further the achievement of sustainable development including the protection and, where appropriate, enhancement of the marine environment within the Plan area.. It will seek to balance the needs of a diverse range of economic sectors including commercial fishing, renewable energy, tourism, recreation, aquaculture, shipping, and oil and gas, amongst many others, with those of local communities, whilst protecting the environment on which they depend.

3.1.3 The main purposes of the draft Pilot Plan are:

3.1.4 It is anticipated that the many lessons learned through the process of producing the Pilot Plan will inform the preparation of future Regional Marine Plans and the governance arrangements that could underpin Marine Planning Partnerships. As such, the development of the Pilot Plan has enabled the consideration of effective ways to:

3.2 The development of the Pilot Plan

The process so far

3.2.1 The process for developing a Pilot Plan for the PFOW commenced in 2009 and followed, as closely as possible, the key steps for the preparation of a regional marine plan set out in Schedule 1 of the Marine (Scotland) Act 2010 (the 2010 Act). Over the last five years, the development of the draft Pilot Plan was progressed in three main stages, beginning with the preparation of the PFOW Marine Spatial Plan Framework Plan published in March 2011. The Framework Plan, published alongside RLG developed for the PFOW area, provided a summary of existing information on different uses of the seas in the area. It explored how the many different uses of the coastal and marine space can affect each other, and made recommendations for future research to ensure that the Pilot Plan was underpinned by relevant, good quality information.

3.2.2 The second stage took forward the work undertaken in the preparing the Framework Plan and the RLG, involving the identification of data gaps and the delivery of research studies undertaken to fill the identified data gaps and ultimately, to inform and support the policy framework proposed for the Pilot Plan. These included on studies in inshore fishing, commercial shipping and boating, monitoring of marine mammals and sea birds, and tourism and recreation value studies, amongst others. However, it is noted that many of the studies commissioned were based on the previously defined PFOW plan area which omitted some of the western portion of the north Sutherland coast as it was based on The Crown Estate ( TCE) Strategic Area. As work has now been carried out to define the Scottish Marine Regions, the preparation of the Pilot Plan was subsequently based on the two Scottish Marine Regions of Orkney and North Coast. This decision was based on the development of the Scottish Marine Regions and feedback from consultation responses that supported using these two regions for the Pilot Plan.

3.2.3 In 2012, the third stage involved publication of the Plan Scheme followed by the preparation of a Planning Issues and Options Consultation Paper in mid-2013 presenting key issues proposed by Marine Scotland for inclusion in the Pilot Plan. An Initial SEA Environmental Report was prepared to accompany the Planning Issues and Options Consultation Paper, and this explored the potential for significant environmental impacts associated with the proposals outlined in the Consultation Paper. Together, the two documents formed the basis for the development of the draft Pilot Plan, and the Initial SEA Environmental Report was taken forward in the preparation of this Sustainability Appraisal.

The working group and advisory group

3.2.4 Between 2008 and mid-2012 the marine spatial plan process was managed by Marine Scotland. The working group for the development of the Pilot Plan was created in May 2012, and a partnership approach to the delivery of the plan was established between Marine Scotland and the Orkney Islands and Highland Councils. This approach was chosen to enable the balancing of local and national issues and to manage effective engagement with local stakeholders.

3.2.5 To provide additional guidance in the Plan development process, an advisory group was established in January 2013. The role of the group was to oversee the progress of the working group and provide expertise and guidance on its outputs. The advisory group was established to ensure that the essential statutory requirements were addressed within the Pilot Plan and to provide high level technical input across a broad range of expertise. Its members were drawn from organisations with knowledge of the protection and enhancement of the PFOW area and from those whose members use the area for commercial and recreational purposes.

3.2.6 The advisory group was not intended to represent every single interest in the PFOW area. Specific sectorial, recreational and community interests, for example, were addressed through engagement and consultation with those stakeholders, including on a one to one basis as required.

3.2.7 An overarching vision, set of guiding principles, aims and objectives were developed to establish the context for the preparation of the draft Pilot Plan and its policies.

3.2.8 The Planning Issues and Options consultation undertaken in 2013 provided an opportunity for stakeholders to put forward their vision for the plan area and to provide input into the development of the Plan’s guiding principles, aims and objectives. The working group, in collaboration the Plan advisory group, developed the framework detailed in Figure 3.1 for the development of the draft Pilot Plan, taking cognisance of stakeholder views and that of the wider legislative and policy context, including the UK Marine Policy Statement and the emerging National Marine Plan ( NMP). 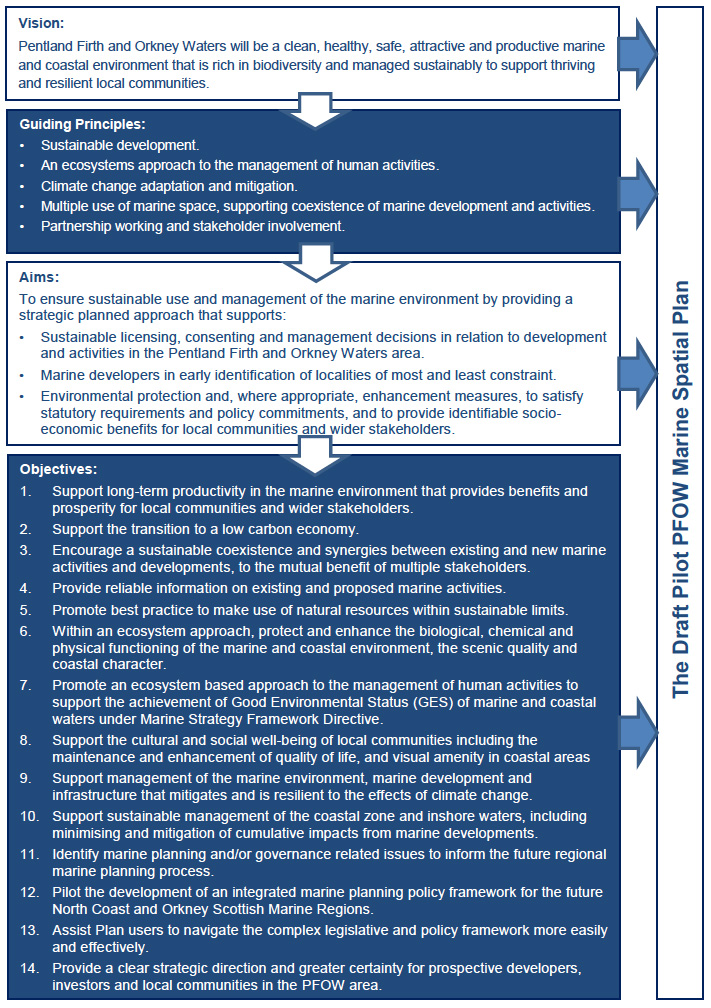 3.3.1 The geographical extent of the draft Pilot Plan comprises the territorial waters from Mean High Water Springs out to 12 nautical miles (the Pilot Plan area). The Plan area includes the intertidal coastline of Orkney, Sule Skerry and Sule Stack, Stroma and the north coast of mainland Scotland from Duncansby Head along the Caithness and Sutherland coast to Cape Wrath (see Figure 3.2). This area encompasses the full extent of the Orkney and North Coast Scottish Marine Regions. 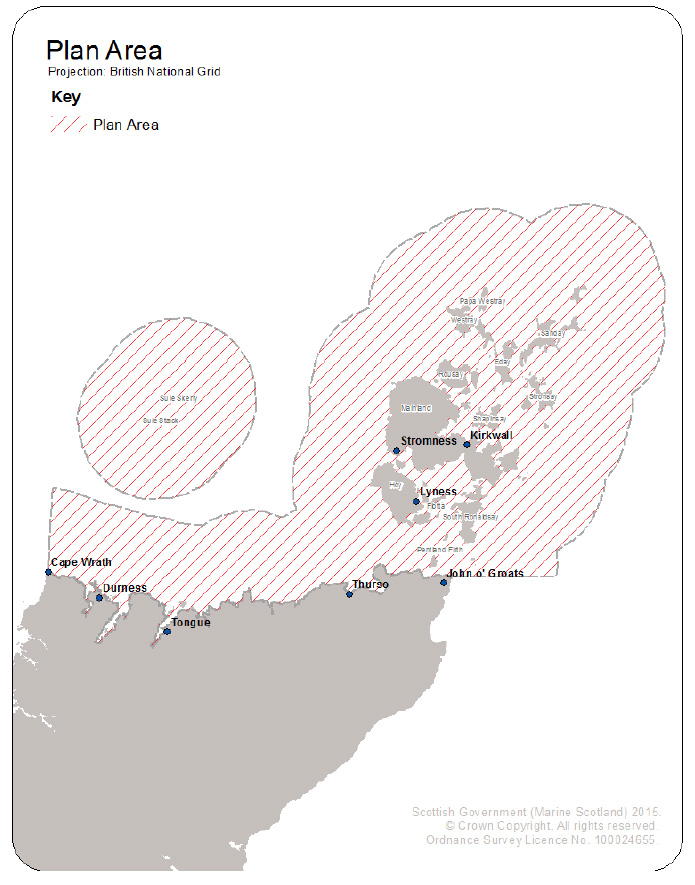 3.5.1 While the Pilot Plan will set out a decision-making framework for the sustainable development and use of the PFOW marine area, it will also seek to balance the demands and aspirations of all users of the coastal and marine area. To implement the Plan’s overall vision, aims and objectives, the policy framework of the draft Pilot Plan consists of a suite of 17 General Policies (1 – 9) and Sectoral Polices (1 – 10). The General and Sectoral Policies, presented in Table 3.2 and Table 3.3 respectively, were identified through a process of stakeholder engagement undertaken as part of the Planning Issues and Options consultation stage (see Section 3.2).

3.5.2 While in principle, the General Policies are applicable to all development and activities in the draft Pilot Plan area, their relevance to any given development and/or activity will vary depending on particular circumstances (e.g. type, scale, location and any potential impacts). The Sectoral Policies have been developed to support the sustainable development and management of specific sectors.

3.5.3 The draft Pilot Plan states that these policies were developed to provide overarching non-statutory guidance for marine users and consenting bodies, rather than replacing existing responsibilities. As a consequence, it will not detail decisions on proposed developments but rather become one of a number of material considerations in the determination of future consenting applications in the PFOW area. Each of the policies is to be afforded equal weight in decision-making and have been developed to be read in conjunction with one another, and alongside the relevant legislation, policies and plans. These are set out in detail in the draft Pilot Plan.