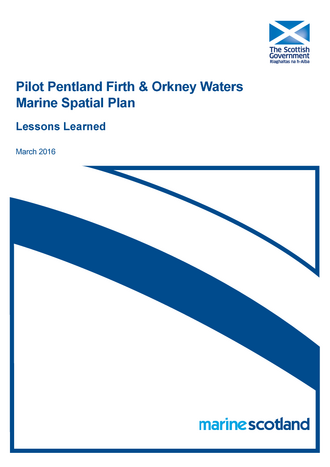 4.1 Effective project management lies at the heart of any marine plan-making process. The Marine Scotland project manager undertook the bulk of the project management tasks, but also had to do much of the administrative duties from April 2012 to June 2014. It soon became very evident that additional administrative support was required; this was provided by an additional member of Marine Scotland staff (employed on a temporary contract) in June 2014. A significant part of that role was spent providing updated maps for insertion into the Plan. The remainder of the tasks included arranging meetings, formatting the documents and maintaining the stakeholder distribution list and project website.

4.2 The rationale for managing the project was to estimate how much time each set of documents would take to produce and when they would need to be ready to be published. This was dependent on timescales out with the control of the working group in many cases e.g. the need for council committee approval at specific meetings (see below). A timetable was then established working backwards from these dates, taking into account the time needed to approve and print the documents. These timetables were then discussed and agreed with all the people responsible for tasks within the project. The project manager then allocated tasks and kept track of progress.

4.3 When the working group formed, one of the first tasks completed was to set out Plan Scheme (see paragraph 2.8 & Appendix 4). This outlined the indicative timeline and steps proposed to develop the Plan and therefore helped ensure all participants and wider stakeholders had a clear understanding of the proposed process. This type of document should be kept up to date so that wider stakeholders are aware of any changes in the work programme.

4.4 Given the project was a collaboration between three core organisations, this meant at each key stage the documents had to undergo scrutiny through at least three committees or sign-off processes. This had the potential to add significantly to the project timescales, particularly during summer recesses and periods of purdah. This effect is demonstrated by the original ambitious timetable given in the Plan Scheme i.e. Plan to be produced by summer 2014 compared to the actual completion deadlines of spring 2016. However, it is not only compliance with committee meeting dates that can cause delay; due to the complexity of the process and the time required for public consultation and subsequent analysis of the responses received, timescales may require flexibility. Subsequent MPPs should ensure therefore they build in sufficient time, depending on the make up of their particular partnership, to accommodate these requirements.

4.5 The development of the pilot Plan ran alongside the development of the National Marine Plan ( NMP). The NMP was not published until quite late in the pilot process, so it was important to ensure that the marine spatial plan was being developed in accordance with the NMP. As the project lead was based within Marine Scotland, this was not a significant issue as they had access to early draft stages. As the final NMP is now published, this will not be an issue for subsequent MPPs; they will have to ensure their plan conforms to the NMP and any subsequent related guidance and is compatible with neighbouring regional marine plans and local development plans.

4.6 Documents were stored on a Marine Scotland hosted facility called “Sharepoint”, which allowed access to all members of the working group. This ensured that all minutes and agendas, along with all the various documents for publication were hosted in one place. This also helped safeguard version control i.e. only one person could work on a document at a time, ensuring that only one version was drafted and updated. I.T. problems with access to Sharepoint towards the crucial end stages of the project caused some difficulties for the local authorities regarding lack of access to all the documents.

4.7 Feedback from the advisory group suggested that it would have been helpful if they could also have worked on a single document held centrally so that all members could see each other’s comments. This would allow members to determine if comments made overlapped significantly or if each member focussed on different parts of the document. Setting up a shared electronic space, such as that used by the working group in Sharepoint (as discussed above), would be more effective than each person providing comments individually, resulting in multiple versions. This would however require varying degrees of access privileges to ensure suitable data confidentiality of the documents.

4.8 Given the wide geographic spread of the working group, use of tele- and video-conferencing, email and phone calls were used extensively. However, face-to-face meetings were also required on a relatively regular basis; this was done on rotation of office locations i.e. Aberdeen, Inverness, Kirkwall.

4.9 Scottish Marine Spatial Planners Group: Whilst developing the Plan, it was identified that it would be helpful if marine planners from around Scotland could get together to discuss wider marine planning issues. The PFOW was one core element, along with the National Marine Plan ( NMP) and the Shetland and Clyde Marine Plans acting as a starting point. Therefore to promote collaboration, the working group organised two annual informal meetings commencing in 2014; it evolved into the informal Scottish Marine Spatial Planners Group. (This group is separate from the academic Marine Alliance for Science and Technology for Scotland ( MASTS) Marine Spatial Planning forum, which focuses mainly on academic research.) These events included representatives from Marine Scotland, academics, coastal partnerships, local authorities and Non Governmental Organisations ( NGO). The meetings provided an opportunity to discuss the current situation and the way forward for regional marine planning. They also provided the chance for collective practical problem solving by holding mini workshops based on topical themes. Key points discussed, aside from the re-occurring resource constraint issues, included:

4.10 The local authority planners from the working group also organised a number of CPD training events for Royal Town Planning Institute land-use planners and local authority councillors and PhD students, using a variety of scenario-based exercises. These were particularly useful in highlighting the need for integrated planning and co-operation between key agencies.

4.11 This was done taking into account individuals’ areas of expertise. The Marine Scotland renewables manager led and managed the whole project. The senior policy planner took the lead with drafting the Planning Issues and Options Consultation Paper (known as the ‘ PIOP’) and the introductory sections of the Plan due to his experience with these types of documents. The drafting of the general and sectoral polices were divided up among the three staff. Where there was a gap in knowledge for e.g. a particular sector, initial plans were for a consultant to be brought in to assist. However, at relatively short notice, the funding for consultancy was no longer available. To compensate for knowledge gaps on these areas, and to strengthen the other policies in the drafting process, sector specific stakeholders were consulted by the working group for their direct input. It is worth noting however, that that the bulk of the feedback on the draft plan consultation related to the supporting text rather than the policies. Subsequent MPPs may however find it helpful if partners such as Scottish Natural Heritage could lead on the drafting the natural heritage polices, Scottish Environment Protection Agency on the water environment and so on or significant resource could be identified for specialist consultant input. As noted above, these sub-groups could be set up in a more formal setting. However, overall management of the plan-making process would be retained by the core group of marine planners with the powers to make decisions on the drafting of the plan policies.

4.12 The Strategic Environmental Assessment ( SEA) was started by the coastal planner who prepared the scoping report and the initial draft of the Environmental Report. The process was continued by the Scottish Government’s Environmental Assessment Team, who prepared the Sustainability Appraisal ( SA) Report, incorporating SEA, Socio-Economic Assessment and Habitats Regulations Appraisal ( HRA) processes. The importance of ensuring that these processes are considered early in the plan-making process and that sufficient resource is provided to undertake this assessment work within the programme was noted.

4.13 The working group relied on the following expertise from within Marine Scotland and wider stakeholders:

4.14 Due to careful management by the project manager, the whole process was administered in an effective and efficient way. Subsequent MPPs will need to ensure that sufficient resources are allocated to both management and administration.

4.15 There is a need to ensure that those involved with the marine spatial planning process have the necessary skills and continuing professional development ( CPD) opportunities. Glegg (2014) has identified three different groups of participants:

4.16 Research has shown that whilst those involved in any of the three groups above may have detailed knowledge in their own field of work and a working knowledge of statutory requirements, they appear to lack basic information about commercial industrial activities (Glegg, 2014). There may therefore be a gap that could be filled by the various marine sectors, helping to ensure others in MPPs have a grounding in the basic operational requirements of the various sectors (see e.g. Sams, 2015). This could be delivered through a marine forum in which commercial sectors to provide training / presentation about their activities to plan makers, as part of the policy development sub groups discussed above.